Painted in the bright red of the “corso rosso” of Italian racing, the Macchi M.C. 72 had been purpose-built for the Schneider Cup Seaplane Races of 1931.  The plane hadn’t made the races, however, as it was still suffering development pains when the British Supermarine S.6B won at Calshot Spit and set a new world record speed of 340 mph.  Yet the Italians knew that their plane could beat that speed — if only they could get the engine to properly perform.  Four pilots were selected for the honor including Capt. Giovanni Monti, Lt. Stanislao Bellini and Lt. Ariosto Neri as well as Warrant Officer Francesco Agello. Italy’s prestige was on the line and Macchi went to work perfecting the design.  What followed was a horrific tale of speed and danger — this is the dark story of the Italian speed records of the early 1930s.

Side view of the FIAT AS.6 engine, essentially dual AS.5s that were bolted back to back, resulting in a 60 degree V-24 with counter-rotating drive shafts.

The Macchi M.C. 72 was essentially a twin-engine aircraft, with two of the 1,000 hp FIAT AS.5 racing engines coupled together in tandem, one behind the other, driving counter-rotating propellers through a central co-axial drive shaft.  The final specification was called a FIAT AS.6 and, with modifications, it produced an extraordinary 2,850 hp.  This allowed the aircraft to enjoy an extraordinarily narrow profile and, coupled with careful aerodynamics for the wings, tail and floats, it resulted in an aircraft with a design speed that should easily exceeded 400 mph.  The only problem was that the FIAT AS.5 engines were notoriously troublesome.  Thus, coupling two together and naming it the AS.6 did not solve the basic problems — in fact, it multiplied the problems even more.

The aircraft’s chief designer, Mario Castoldi, who was a well-known critic of FIAT’s engines, scoffed that “In FIAT, power is measured in donkey-power.”  Nonetheless, the engineering was at the extremes.  The AS.6 was liquid cooled and produced so much heat that Castoldi had to integrate the radiators into the tops of the floats as well as on the surface of the wings, with cooling tubes running in parallel with the airflow.  In fact, the entire plane was engineered around the AS.6. 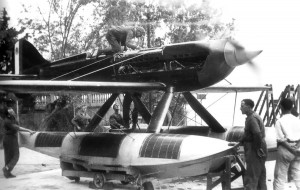 Ground tests of the AS.6 engine on the M.C. 72 prior to undertaking speed runs.

The Macchi M.C. 72 development effort pressed ahead in hopes of entering the Schneider Cup races of 1931.  Yet things didn’t go well.  Despite early promise of the engine and perfect set of bench tests, once airborne in the M.C.72, the AS.6 engine would start violent backfiring.  On the ground, the engine ran perfectly, but once aloft, the backfiring began.  Nonetheless, the lead test pilot, Capt. Giovanni Monti, set a new speed record of 375 mph.  Unable to press faster due to the backfiring, a team of FIAT engineers was called out to Lake Garda to observe the problem first hand.

Once the FIAT team was assembled on August 2, 1931, at Lake Garda, Monti took the plane up.  The backfiring began again, but this time caused the fuel mixture in the induction manifold to ignite.  Instantly, the engine and nose of the aircraft exploded.  Capt. Monti was killed when the plane hit the water.  Despite the crash, the urgency of the approaching Schneider Cup race date forced the continuation of the program, which had Benito Mussolini’s personal backing.

The M.C. 72, in the water at Lake Garda, showing off its sleek lines and counter-rotating propellers.

Another M.C. 72 was prepared for more flight tests, this time by the second of the four pilots, Lt. Stanislao Bellini.  Once again, the M.C. 72 was put through its paces at Desenzano del Garda.  On September 10, 1931, with two days to the race date, Lt. Bellini set a new record of 394 mph.  However, after passing the final timing gate, the plane continued on into the distance and was seen to fly directly into a hillside.  Lt. Bellini was killed on impact.  Afterward, pieces of the aircraft were found along the flight path leading to the crash site, indicating that yet another explosion had occurred.  Lt. Bellini had never had a chance and undoubtedly the plane was out of control as it sped toward the hillside.  Italy made the hard decision to cancel its participation in the Schneider Cup races, which Britain would go on to win with a speed of just 340 mph. 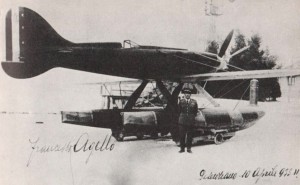 A signed photograph of Warrant Officer Francesco Agello at Desenzano del Garda with the M.C. 72 on April 10, 1933.

Italy’s leader, Benito Mussolini still wanted to prove Italy’s superiority.  Thus, despite the loss of the Schneider Cup, he personally backed the project.  The Italian government authorized additional funding for more speed tests.  In the interim, as flight tests continued, the engineers guessed that the backfiring was caused by the 50/50 mix of petrol and benzole.  They brought in Britain’s high octane fuel expert, Rod Banks, who had made his own mix of petrol and benzine for the Supermarine S.6B seaplanes that had won at Calshot.  With the assistance of Banks, a new, exotic fuel mix was tried.  As well, however, Banks noted that the engine design was flawed.  The engineers had neglected to take into account the ram air effect of 400 mph airflow into the induction system.  With a modification that he applied from the S.6B configuration — and it worked and the backfiring stopped.

The third test pilot slated for the M.C. 72, Lt. Ariosto Neri, however, was killed while flying another aircraft, a CR.20 during 1933.  This left only the last of the four original test pilots, Warrant Officer Francesco Agello, to test the plane.  Several other pilots were recruited for the effort, including Lt. Col.Guglielmo Cassinelli and Capt. Pietro Scapinelli, but none were checked out or skilled in the highest speed handling of the aircraft, where the plane was flown to the edge of control where potential problems of flutter might result.  Each set new records of 391 mph and 384 mph respectively (the latter being an average speed over 30 minutes).  Thus, it would be Warrant Officer Agello, however, who would take the plane up for its straight line three pass speed tests — setting a new record of 423 mph on April 10, 1933. 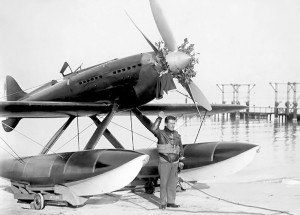 Warrant Officer Francesco Agello poses with the M.C. 72 after setting the world record seaplane speed of 440 mph. A wreath is placed around the plane’s nose and propellers.

The tests with the M.C. 72 were not yet complete.  With six months of additional engine work, a sprint version of the FIAT AS.6 was developed that could produce 3,100 hp.  Once installed, the plane was taken back to Lake Garda for additional speed runs at the hands of Warrant Officer Agello.  His time, on October 23, 1933 — today in aviation history! — he produced a new speed record, averaging 440 mph over his three speed passes.  At that speed, however, the aerodynamics were clearly at their limits.  Though perhaps additional speed tests could have been run, for the Mussolini Government the record was perfect — at exactly 100 mph faster than the winning Supermarine S.6B, the M.C. 72 would go down in history as the fastest piston-engined seaplane ever built, a record that still stands today. 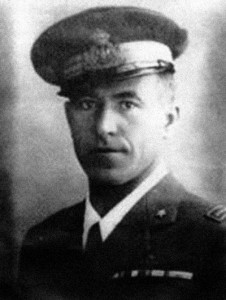 Francesco Agello, photographed in early 1942, just a few months before he perished in flight after a collision with another plane during the war.

Clearly, the terms “difficult and dangerous” were an understatement.

The seaplane speed racers of the Schneider Cup taught valuable engineering lessons to the British and Italians aviation industries.  In Britain, the Supermarine S.6B design formed the basis for the new generation of fighter aircraft, the Supermarine Spitfire.  Likewise, in Italy, the M.C. 72 and lessons learned from its design and testing resulted in a series of Macchi fighter planes, including the M.C. 202 Folgore, arguably the best Italian fighter plane of the upcoming war.

How were the engine problems with the FIAT series solved for the M.C. 202 Folgore?


They were solved simply installing a German origin engine: the DB601, built under license by Alfa Romeo with the name AR RA 1000 RC41.