One hundred years ago, in the early days of aviation’s rapid advance, the flights with model aeroplanes were highly respected and not considered, “child’s play”.  In fact, many innovations were tested and validated first on models before being carried forward into the design of early planes.  Likewise, many early planes were duplicated into model form and, through frequent flight in that form, improved and made safer.

For those wishing to recreate those heady days of aviation’s past and who don’t have the desire to hand build your own full-size Deperdussin or Sopwith, we bring you an historic model aeroplane design — as designed and built today in aviation history, one hundred years ago!

By way of introduction, as written by V. E. Johnson, M.A., the Royal Aero Club offered the following in a March 1913 issue of Flight:

A 12-oz. Tractor Monoplane, WE publish this week particulars and scale drawings (kindly supplied us by Mr. A. B. Clark, Hon. Sec. of the South Eastern Model Club), of a rubber-driven tractor model of a somewhat heavier weight than those in general vogue.  The model was partially constructed by Mr. J. H. Dollittle (who is well-known for his work in connection with this type of model), and completed by Mr. C. A. Rippon, the present owner and flyer of the model; both being members of the above-mentioned club.  As Mr. Clark says:  “twelve ounces is considerably in excess of the average-rubber-driven model, and judging by the monthly reports in FLIGHT there appears to be only a few models (excluding, of course, power-driven ones), which exceed 10 or 12 ozs. in weight and which are actually capable of flying a fair distance and for a sufficient lime to allow of careful observations being made.”

Thereafter, the Royal Aero Club provided a wonderful description of the design for its members to build.  The text read as follows:

The Fuselage is 46 in. in length — the maximum depth and breadth is 4.5 in. and is situated about 12 in. from the propeller bearing.  The three main longitudinals are constructed of straight-grained silver spruce, and the distance pieces (or struts) are made of yellow bamboo (which is more reliable than the mottled.  The joints are bound with strong thread and glued — being afterwards again bound with silk ribbon 0.5 in. wide.

The Main-plane spars are built of ash 3/8 in. 5/16 in. section, and the ribs of birch 3/16 in. by 1/16 in. section.  The ribs are joined to the spars by small pins or fretwood nails.  The plane has a camber of about 0.5 in. near the centre with a gradual reduction towards the tips — the outside rib having a camber of only 0.25 in.  The trailing edges of this plane are flexible.  The chord at the fuselage (centre) is 6 ins., tapering to 5 ins. at the tips.

The Tail is constructed of 5/32 in. x 3/32 in. cotton wood (should cotton wood not be procurable, straight-grained poplar can be used).  It has a maximum chord and span of 15 ins.. and 10 ins. respectively.  This plane is laid quite flat on the top frame-members, and is wired in place.  The Rear-fin is made of 18 S.W.G. piano wire.  The covering fabric used for all these surfaces is Hart’s proofed silk.  The main plane (and we presume the others as well) is only single surfaced. 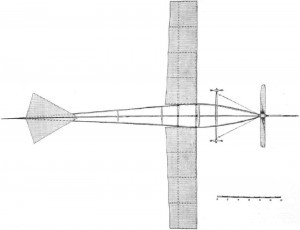 The following details were offered to round out the construction process, though it seems that in today’s hobby shops or online stores suitable propellers and gearing can be more easily found to stand in for the hand-built ones described:

The Tractor-screw is 12 ins. in diameter and 18 ins. pitch — it is laminated, being built up of cotton wood.  The one shown in the drawings is two bladed — but Mr. Rippon proposes to fit on a four-bladed one at an early date.  The Landing-chassis is of the simplest, but is found quite adequate in practice.  The large central skid is composed of cotton wood reinforced on the underside with a strip of 3/16 in. clock-spring.  The semi-circular connecting place between the lower longitudinal and the central skid is also made of clock-spring.  The bamboo axle is rigidly bound to the skid and has two radius wires on either side, one is clearly shown in the drawings, but the other is attached to the skid immediately beneath the propeller and joins the axle near to each wheel.

The original write up was quite clear and simple in its description of the performance of the model, as based on the use of multiple rubber bands.  Today, similar bands are available and could be paired together behind the propeller to give similar performance:

The Motive-power is 14 strands of 1/4 in. strip rubber (best quality) weighing 2 1/4 ozs.  The number of turns given varies between 250 and 280, and the model is capable of making average nights of 90 to 100 yards.  The best duration to date is 22 secs., i.e., 20 secs, power flight and 2 secs, glide — this refers to a hand-launched flight, the model so far not having been thoroughly tested for rising off the ground — on the few occasions when the model has been so tried; the average duration of run before rising was about 5 secs.  No doubt with further tuning up both duration and distance will be improved.  The following weights may be useful:  Fuselage (complete with chassis), 6.5 ozs.; main plan with cabine, 2 ozs.; tractor screw and shaft, 0.5 ozs.; tail plane and fin, 0.75 ozs.; rubber, 2.25 ozs.

If anyone builds one of these, let us know and we’ll publish it here with your complete report of its flying characteristics and the experience of recreating it.  History is best experienced through recreation after all.  What lessons may be learned?