The date was March 4, 1942.  Just four months had passed since the Japanese attack on Pearl Harbor.  Since then, America had ramped up its war footing rapidly.  The Japanese knew few details and thus, the Imperial Japanese Navy (IJN) realized that it would have to overfly Pearl Harbor once more — this time in a reconnaissance mission — to gain critical information about the status of the base and disposition of American aircraft carrier fleet, if indeed they were at anchor there.  As well, the IJN decided that the mission would be a reasonable test for the new Kawanishi H8K1 “Emily” flying boat, a bomber that could carry out long distance bombing raids.  And thus, a second attack on Pearl Harbor was launched, this one much smaller than the first, and, as it happened, one that would turn into a “comedy of errors” on both sides.

The Plan and Early Problems

The IJN plan for the attack on Pearl Harbor was complex in its conception.  A small flight of the Kawanishi H8K1 flying boats would be sent to Wotje Atoll in the Marshall Islands from which they would stage a long range attack.  In order to achieve the round trip, they would land northwest of Hawaii at Kanemiloha’i (French Frigate Shoals), where they would be refueled by the Japanese submarine I-23.  From there, the planes would fly to Pearl Harbor and bomb the so-called “10-10 dock”, so named because it was 1,010 feet long and a key maritime asset in Pearl Harbor for the US Pacific Fleet.  The mission was designated as “Operation K” and secret radio communications were transmitted to the key units involved. 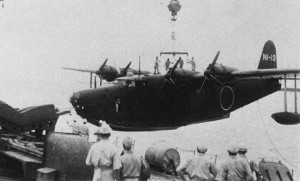 An Kawanishi H8K1 of the 802nd K?k?tai is lifted out of the water onto the decks of the HIJMS Akitsushima, 1942, off Shortland Island.

From the outset, things went wrong — and not just for the Japanese but on both sides.  The IJN submarine I-23, a Type B Cruiser Submarine, was dispatched to hold station 10 miles south of Oahu and report the weather as well as act as a “lifeguard” for the mission in case any of the planes was damaged and had to ditch in the ocean.  Another three submarines were dispatched to French Frigate Shoals to support Operation K, carrying aviation fuel for the aircraft.  The I-23 submarine, however, simply disappeared — what happened to it remains a mystery, even to this day.  There is a possibility that it was sighted and sunk by American forces, who reported several engagements with possible submarines during the mid- to late February time frame, but it is equally possible that the submarine was lost in an accident at sea.  All hands were lost, though this was not known at the time by the IJN.

Prototype #2 (Y-72) of the Kawanishi H8K1 flying boat, code-named “Emily” by the Allies — one of the two planes flown in Operation K. Deliveries began in February 1942 and the first mission was flown just a month later — Operation K itself.

When it was time to launch the mission, only two of the brand new Kawanishi H8K1 flying boats were available, Y-71 and Y-72, a reduction in the planned scale of the attack, in which five aircraft had been tasked.  As it was, both were pre-production prototypes that had been pressed into service, carrying very limited armament and armor.  A decision was made to proceed in any case.  The lead plane (Y-71) was flown by Lieutenant Hisao Hashizume and Ensign Shosuke Sasao flew the second aircraft (Y-72), both were pilots in the elite 801 Kokutai, which had taken responsibility for receiving and testing the new flying boats.  At Wotje Atoll, both planes were loaded with four 550 lb bombs and fully fueled for the long endurance mission.  It was not lost on the IJN that the mission was the longest bombing raid ever conducted and that it would proceed without any fighter escort (an impossibility due to the shorter range of the fighters).  The mission would be the first Kawanishi H8K1 operation in Japanese military service. 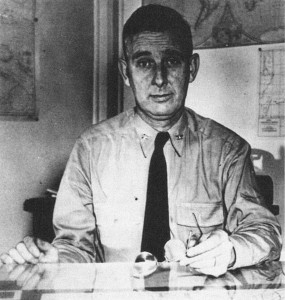 The US code breaking operations that had uncovered the original attack plans against Pearl Harbor yet again struck gold with Operation K.  The Japanese radio communications surrounding the mission were intercepted and decoded.  Incredibly, four months after the code breaking team’s messages had been ignored at Pearl Harbor, yet again, their urgent warnings were ignored by the US Navy.  Thus, no ships were dispatched to French Frigate Shoals to intercept the refueling operation and no planes were sent forward to attack the aircraft while refueling.  It was incredible, but the March 4 raid was a repeat of December 7, 1941 — the Japanese achieved surprise despite having their codes broken!

At the time, Captain Joseph J. Rochefort, USN, working in the Combat Intelligence Unit, which was responsible for breaking Japanese codes, was incredulous that his warning had been ignored.  Indeed, it had been sent to CINCPAC and to Com-14, which should have taken action to defend Hawaii.  That nothing happened was astonishing.  Years later, he would recall his reaction at the time, “I just threw up my hands and said it might be a good idea to remind everybody concerned that this nation was at war.” 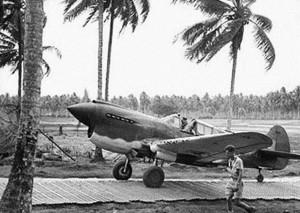 Curtiss P-40 Warhawks were dispatched based on the radar reports of two incoming aircraft but could not find the enemy in the night skies northwest of Hawaii.

Nonetheless, the US Army radar operators and message handling personnel in Hawaii this time were not asleep at the switch.  The radar operators reported two incoming contacts from the northwest and the message was handed off to the air defense commanders, who immediately scrambled both a set of P-40 Warhawks and some PBY Catalinas.  For the US Army and US Navy, the incoming planes were wrongly interpreted as an incoming mass attack, essentially a repeat of December 7.  Thus, the PBY Catalinas were dispatched to find the Japanese aircraft carriers that they felt were certainly hiding somewhere to the northwest, from which the planes must have been launched.  However, weather was poor and heavy clouds obscured made an air search difficult. 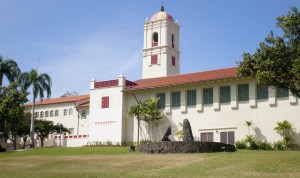 The same bad weather, however, also protected the two Kawanishi H8K1 flying boats, which arrived off the coast of Oahu at 2:00 am (in the middle of the night).  In the darkness, they had managed to avoid the American fighter interceptors — though unknowingly.  The raid’s commander, Lt. Hashizume, called over the radio and ordered his wing man, Ens. Sasao, to fly with him around the north side of the island and attack Pearl Harbor from an unexpected direction.  Ens. Sasao, however, missed the radio message and turned to the south to approach from the opposite side.  The two planes were instantly separately and lost track of one another in the darkness.  Both proceeded independently against Pearl Harbor as the American P-40 Warhawk fighters fruitlessly searched the night skies northwest of the island.  Unknown to the Japanese pilots, however, was that a rainstorm was centered over Pearl Harbor at the time — a lucky coincidence.

For his part, Lt. Hashizume had great difficulty finding his target through the clouds at night and, compounding the issue, Hawaii was under a blackout for wartime reasons — this may have been the most effective use of a blackout by the Americans during the war.  Seeing only patches of the land below from his altitude of 15,000 feet, he finally dropped his four bombs.  The bombs came down far off the mark, instead hitting north of Honolulu on the side of Tantalus Peak, an extinct volcano, fully six miles off target.  As it was, his bombs hit just 0.2 miles from Roosevelt High School, which, being in the middle of the night, was unoccupied at the time.  The explosions shattered the windows and left four craters that were about 30 feet around each and 10 deep. 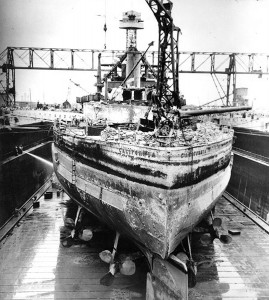 The USS California is dry docked at Pearl Harbor, having been raised just three weeks after Operation K; the disposition of this ship was one of the goals of the reconnaissance mission. Photo Credit: US Navy

Lt. Sasao too had great difficulty.  Unable to locate the naval base at Pearl Harbor, he bombed with reference to the only landmark he had seen, the lighthouse at Ka’ena Point, which had marked his turn point to the south.  His best estimate of the location of the base was incorrect and his bombs rained harmlessly down into the waters offshore.  The two planes independently turned back to the southeast for the long flight back.  While Ens. Sasao made to Wotje Atoll as per the mission plan, the other aircraft did not.  Having suffered some damage to his plane on take off from the refueling point, Lt. Hashizume elected to bypass Wotje Atoll and fly onward to Jaluit Atoll, another base in the Marshall Islands where better maintenance capabilities were in place.  Both planes returned safely, their crews exhausted beyond any expectation from the long ordeal of the flight. 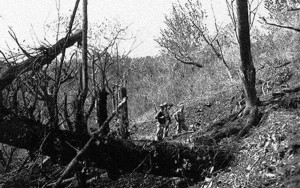 Soldiers inspect the bombing’s effects on the trees near the Roosevelt High School after Operation K. Photo Credit: Honolulu Advertiser

For the Japanese, Operation K was viewed with some favor — an errant newspaper in Los Angeles reported significant casualties on the ground and the Japanese quickly picked up the story, repeating it in their own reporting and taking it on as fact.  As it was, the Los Angeles reports were entirely incorrect, based on the “fog of war” and on the expectations of the reporters, who were a bit overzealous and perhaps hoping to break the news of yet another Pearl Harbor-type attack on America.  The IJN went about planning more attacks, even if their enthusiasm was tempered by the reports from the aircrews — clearly, the mission was too long to be easily replicated.

In the interim, six days later, another Kawanishi H8K mission was launched, but this time against Midway Atoll to support the planned Japanese attack there.  Once again, Lt. Hashizume flew his Kawanishi H8K1 (Y-71) in service of the IJN on a critically important long range reconnaissance mission.  A second (Y-72) was dispatched to Johnston Island, again flown by Ens. Sasao.  This time, however, Lt. Hashizume was intercepted by a Brewster F2A-3 Buffalo of VMF-221 from Midway Atoll.  He was shot down based on new radar-controlled interception methods that were being tried out at the time.  The interception was executed perfectly.  There were no survivors.  For his part, Lt. Sasao returned with excellent photo imagery.  On March 18, he was ordered back to Japan with Y-72. 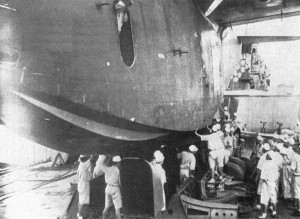 Finally on May 10, the Japanese decided that another attack mission would be flown.  It was critical, from their perspective, to locate the US Pacific Fleet’s aircraft carriers prior to their upcoming attack on Midway.  However, even that mission was canceled when the Japanese realized that the US Navy had worked out where the Japanese were refueling.  A reconnaissance flight there showed two warships anchored and awaiting the next Japanese ship.  After that, no further missions were planned.

Ultimately, Hawaii would remain out of reach for the IJN after the disaster of the Battle of Midway — but that’s another story.

How many Kawanishi H8K1 aircraft would be built and what role did they play in the remainder of the Pacific War?


The first production model, the H8K1 Emily, totalled 16 aircraft. Total of all variants was 167 aircraft. The H8K continued to fly throughout the war in the capacity of bomber, transport and recon aircraft. It possessed a formidable defensive armament of 5 20-mm cannon and 4 7.7-mm machine guns.


There are two Kawanishi Flying boats in the Jaluit Atoll lagoon. One near the former Japanese seaplane base at Imiej is in about 50 feet of water. The other is in a deeper lagoon.