It was supposed to have been a beautiful day on June 10, 1990 (today in aviation history).  Vacationers filed onto a regular morning British Airways flight to Spain.  Flight attendant Nigel Ogden, along with the others on the flight crew of British Airways Flight 5390, had managed a late departure — an hour delay, and they had reminded the passengers of the beautiful weather awaiting down south.  After a 7:20 am departure, the BAC 1-11 was climbing out and the cabin crew began to prepare for the meal service.  A few hours later, as usual, they expected to be landing at Málaga, Spain.  On board were 81 passengers as well as the six person flight crew — two pilots and four flight attendants.

On the 13th minute into the flight, as the plane was climbing through 17,300 feet of altitude, flight attendent Nigel Ogden checked in on the cockpit crew to ask if they would like some tea.  Captain Tim Lancaster and First Officer Alastair Atchison nodded and as Ogden turned to exit, a sudden loud bang shocked him.  Instantly, he thought, “My God. It’s a bomb….”

A British Airways BAC 1-11, one of the workhorses of the airline’s fleet in the 1990s. Photo Credit: Przemys?aw Jahr

Spinning around to look forward into the cockpit, Ogden was stunned to see that the front windshield on the captain’s side had blown out.  The captain was half out of the aircraft, having been sucked out of his safety harness by the rapid depressurization.  Everything in the aircraft was flying forward and out the front window past the captain.  Somehow, the pilot’s ankles were wedged around the top of the control column, fixing him half out of the plane.  Instantly, Ogden lunged forward and grabbed onto the captain’s belt with both hands.  He wrapped himself around the captain’s waist as a fire extinguisher tore free from the wall and flew forward past Ogden’s head out the windshield.  Checklists, manuals and other papers were swirling and flying forward amidst the temporary mist that forms in the air during a rapid decompression.

This was no bomb.  It was a malfunction with the aircraft — something had gone wrong which had caused the windshield to explosively shatter outward.  Luckily, the first officer, Alastair Atchison, had still been in his heavy harness for take off — only that prevented him from being sucked out too.  The captain’s ankles had jammed the stick forward when they caught hold and the plane had obediently nosed off of its climb, rounded off and begun a sharp descent.  Atchison regained control and continued the rapid descent toward the thicker air below. 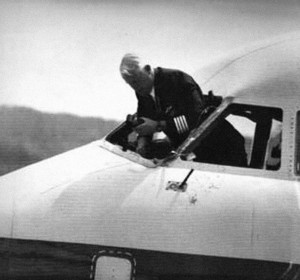 Not a dramatization, rather an interesting coincidence as an accident inspector leans through the missing windshield of the aircraft during the investigation, unwittingly nearly demonstrating the stricken pilot’s initial position.

The outside air temperature was 17 degrees C and the airspeed of the BAC 1-11 topped out over 630 kmph as it rocketed downward.  With pressure levels equalized, the outward surge of cabin air ended, instantly replaced by an inward blast of air being forced through the open windshield.  The windchill off the bottom of the charts.  Almost immediately, Ogden’s fingers, arms and face were being frozen and burned by the maelstrom.  Ogden could barely see since keeping his eyes open meant that they froze too.  The captain’s body was twisted over backward across the top of the fuselage, the wind clawing at him, dragging him slowly, inexorably outward.  Ogden yelled for help and held on with all his strength.

The noise was horrendous, so bad that the first officer couldn’t hear any replies from air traffic control over the radio after he declared an emergency.  He requested immediate vectors back to Southampton Airport and asked if someone could read the emergency procedures checklists for him.  He was in a single pilot operation and all of the cockpit checklists were gone, having been sucked out.  Over the howling blast of wind swirling through the cockpit, he could hear nothing in response.  He pointed the nose toward Southampton. 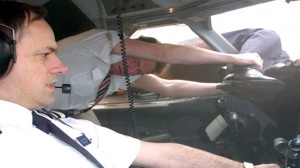 Below 11,000 feet, Atchison was able to get the autopilot engaged and slowed the flight to 300 kmph.  From there, he continued down steadily so as to get the plane on the ground. With the reduced airspeed, he could hear over the radio.  Meanwhile, the other flight attendants managed to secure Ogden with safety belts so that he wasn’t at risk of also being pulled out, but another crisis loomed — he was slowly losing his grip.  Even at the reduced speed, the cold and wind and continuous force were simply too much for Ogden.

Suddenly, the captain’s body slipped and with a lurch, it pulled around the side of the plane.  Incredibly, Ogden maintained his grip somehow as the captain’s face and body started banging into the side windshield, buffeted by the wind.  Ogden turned to look into the seemingly lifeless stare on the captain’s bloodied face just outside the plane — he knew he was dead from the empty stare he received back just inches away through the side window.  The captain’s  arms stretched past him toward the tail, his body slamming back and forth.

As the cabin crew prepared the passengers for an emergency landing at Southampton Airport, Atchison requested the longest runway of 2,500 meters.  Weirdly, he was denied — he was routed instead onto a shorter runway of 1,800 meters, despite his emergency request and heavy fuel load.  Feeling that he would soon no longer be able to hold on given the cold that was sapping the strength from his grip, Ogden finally handed off the hold onto the captain’s legs to another crew member, Simon Rogers, who strapped himself into the third pilot’s seat and managed to get the captain’s feet wedged over the top of the headrest, which helped him hold on.  One of the crew suggested that maybe they should jettison the body, but Ogden refused — and anyway, Atchison realized that the captain’s body could be sucked into one of the engines at the rear of the aircraft, causing a further catastrophic damage.  They would have to hold on to landing.  At least that way, the family would have a body to bury. 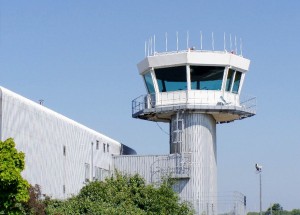 As it happened, Alastair Atchison was able to grease the BAC 1-11 in on the shorter runway and bring it to a stop quickly enough that there were no problems.  The emergency crews rolled up soon after he brought the plane to a stop.  All the passengers were unharmed.  Ogden had frostbite on his face and hands and damage to one of his eyes from the freezing wind.  The captain’s limp body was pulled back into the cockpit.  It was battered, bruised and frost-bitten.

The passengers evacuated on the normal air stair — predictably, Ogden had to yell at a couple who tried to get their hand baggage out of the overhead bins, despite the emergency.  The fire and medical crews arrived and immediately loaded the captain onto a stretcher where, incredibly, he came too.  He had been unconscious the entire time.  He looked around and said these famous words: 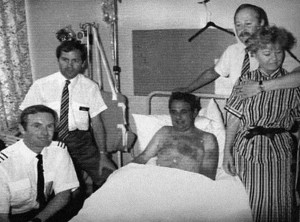 After the incident, the captain is surrounded by the flight crew in his hospital bed.

In the end, everyone recovered from the ordeal.  The worst off among the cabin crew was Nigel Ogden who suffered post-traumatic stress from the incident, despite his heroic role.  He was eventually taken off flight status for medical reasons and took a ground job outside of the airline — at first working as a security guard at a Salvation Army center.  Nigel Ogden’s role that day deserved a medal and international acclaim; he was a true hero who had saved the life of the pilot, against all odds.  Later computations of the wind speed and forces showed that he had maintained a steady grip in the freezing cold against an equivalent weight that exceeded 500 pounds.  As to where he had attained such superhuman strength, Ogden remarked simply that he had played enough rugby to develop a bit of strength over the years.

As for the cause of the accident, it came down to the wrong bolts being used on a windshield that had just been replaced — a routine matter.  As it turned out, the 84 of the 90 bolts used on the windshield were 0.026 inches too small in diameter, while the remaining ones were too short by 0.1 inches.  In addition, the BAC 1-11 had a critical design flaw — the windshield was bolted on from the outside, rather than from the inside, where it would have had better strength from resting against the frames, held firm by the inner pressure.  As designed, the bolts carried the load almost exclusively.

It was a disaster waiting to happen — and from the smallest things, aviation history is made.

This article is dedicated to Nigel Ogden, the hero of British Airways Flight 5390.


This tops them all.


The hero is Alastair Atchison. The pilot should have left his seat belt on! However, this is a case of “coulda woulda shoulda”. The pilot, however, seems oblivious to the impact he had on those who heroically acted to save him and his passengers.


How is any single member of cabin crew the hero? Who had the hardest job of anyone? In my opinion, it is the copilot. Without the copilot, no one would have survived.