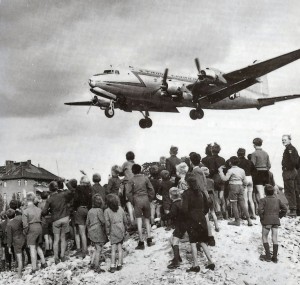 Berliners watching a C-54 land at Berlin’s Tempelhof Airport, during the Berlin Airlift in 1948

Sixty-four years ago, on June 26, 1948, the United States, Britain, and France launched an emergency airlift to provide food and fuel to over 2.5 million German citizens living in the Western Zones of Berlin. The city had been partitioned between the victorious allied powers at the end of the war and, despite having French, British, Russian and American sectors, was located entirely within what was then East Germany, a Soviet-controlled proxy.

As the Cold War heated up, relations between the allied powers quickly deteriorated. As part of ill-minded attempt to take control of as much of Europe as possible, Stalin made a determined effort to drive the West out of Berlin with a complete blockade of the city. All land routes were shut down, including the all-important railroad line into the now besieged city. The blockade was just one step short, politically, of entering into open warfare with the United States, at that time the world’s only nuclear-armed power.

Under President Truman, the USA vowed to break the blockade. With starvation of the Berliners looming, the USAF, along with other Western allies, began an unending air bridge into the city. Under the command of Combined Airlift Task Force Commander Gen. William Tunner, 278,228 missions were flown. Aircraft participating from the United States included 330 C-54 Skymasters, hundreds of C-47s, five C-82s, one C-74, and one C-97. The airlift, called “Operation Vittles” by the Americans and “Plain Fare” by the British, delivered more than 2.3 million tons of food, coal and supplies over the following 15 months. British planes included Dakotas, Yorks, and later on Hastings. Australian, New Zealand, and South African flight crews flew British Royal Air Force planes during the operation as well.

The flights were directed into Tempelhof (in the US zone) and Gatow (in British control). Congestion at these airports (primarily in offloading the aircraft) caused the allies to build a third airfield in the midst of the blockade, literally flying in equipment, supplies and people needed to construct it. This new airport would feature a 2,428-metre (7,966 ft) long runway, the longest in Europe at the time, and was named Tegel. Located in the French sector, it had been an abandoned area that prior to WWII had been a rocket development facility where such notables as rocket pioneer Wernher von Braun worked. During the war, it served as a training facility for Luftwaffe Flak crews.

Completely destroyed in bombing raids, by 1948, it was little more than an empty field and was ideal for the Berlin Airlift airport expansion plan. The combined will of the Western allies was brought to bear and the entire airfield was built in just 90 days. It opened to the first air traffic on August 5, 1948. Today, a much modernized Tegel still serves as Berlin’s main airport, though in 2014, a new airport is scheduled to open that will significantly upgrade the quality of the city’s air transportation infrastructure.

The high point of the Berlin Airlift came on April 6, 1949, when the participating countries mounted what was known as the “Easter Parade.” Throughout the “parade,” an average of one plane a minute landed in Berlin. In all, 12,940 short tons were delivered in this period alone. It was enough, however, to demonstrate to Stalin that the continued siege was fruitless. Just a month later, the blockade ended. Stalin had conceded defeat. The airlift would continue until September 30, 1949, until stability and a full understanding had been reached with the Russians.

One Berlin Airlift pilot, Col. Gail Halvorsen, was nicknamed the “Candy Bomber” for coming up with the idea of dropping chewing gum and chocolate to Berlin’s children as the planes came in for a landing. Halvorsen, then a First Lieutenant, one day came up with the idea when he saw the kids along the airport perimeter road watching the planes come in. He fashioned a few candy bags to tiny parachutes for the next flight. Word spread fast and his small gesture soon came to characterize the Americans in the hearts of Berliners. Made official as Operation “Little Vittles,” it remains one of the highpoints of the mission for many of those involved.

The mission was not without its risks. Before it was over, 84 military servicemen and civilian employees from Germany, England, France and the United States perished. Among them were 31 Americans who died, the cost of flying day and night in all weather during the Berlin Airlift.

The names of those Americans who lost their life during the Berlin Airlift follow:

Military airlifts through history have proven to be decisive in military resupply, even if they are not cost-effective.  On average, the cost of a military airlift, pound-for-pound, is about 20 times what it costs to ship materials in on surface transportation, whether by sea, rail or truck.  While aviation has come a long way in terms of speed and convenience, the price remains high, making it best suited for perishable goods, high value cargo and other supplies.  The massive resupply effort of the “Easter Parade” would deliver a total of 12,940 short tons, equating to 25,880,000 pounds of cargo in that 24 hour period — this was only achieved through the combined airlift capability of three nations working in unison at absolutely maximum capacity.  Today, this same amount of cargo can be delivered by 30 C-17s, flying five missions each over the 24 hour period, an easy achievement given that the average run during the Berlin Airlift was very short with flights launching from nearby West Germany.


I’m enquiring on behalf of my friend Georgina Orms regarding any information of her father ‘Private First Class Johnny T Orms’ – who was killed during the Berlin Airlift. I guess the most important thing is to find out where he may be interned, i.e. Frankfurt or Berlin. Any help would be appreciated.

My records show that his body was repatriated to the USA and that he was interred at Elmwood Cemetery in Coffeyville, Kansas.

I hope that this helps you.

I wonder if Lt. Stuber was born in Germany, or probably in Poland in the former Westpreussen?

If you have any information, I would appreciate it very much.


Hi Monika,
Robert Wallace Stuber was my father. He was born in 1920 in the United States. If you have any other questions let me know..


Is there any way to get the names of the pilots who flew the Berlin Airlift? I was told as a child that my father was one of the American pilots. I would really like to know for sure. How can I research the names?


I am looking for information on Charles M. Mills, who was a pilot during the Berlin Airlift.


I am looking for a list of all the pilot’s names who flew the Berlin Airlift.
Thank you !


My father, Robert Rae, is 95 and lives with me. He was a pilot in the Berlin Airlift. He did tell me he only transported coal. I was wondering if there is any information or website that I could show him where his name is listed. I’ve tried looking online but could not find anything. He’s never talked much about his time in the service and I don’t want to press him on that issue. I do want him to see that what he did was, indeed, important and worth being proud of before he passes away. He retired from the US Air Force as a Lt. Colonel back in ’62.


I do not know of any list of those who flew — there were many. At Rhein Main Air Base, Frankfurt, Germany, there is a memorial to those who flew the Berlin Airlift. It is a stunning piece, arcing and projecting overhead toward Berlin, symbolizing the many mission flown in the aerial bridge that saved the western part of city from being taken over by the Soviets.


I have a question — was PFC Ronald E. Stone of Mt. Stering, Kentucky, the youngest person to die during the Berlin Airlift?