From the Ashes of the Model 299

In 1935, the Boeing Model 299 was the most extraordinary design conceived for service as a bomber with the US Army Air Corps.  It featured four engines, a central bomb bay and gunner stations spaced around the fuselage for defense.  It was fast, could carry an excellent bomb load, and had the long range necessary to enable the Army’s evolving doctrine of strategic bombing.  After five years of development, it was undergoing testing, flown by Boeing’s chief test pilot, Leslie Tower, and an Army test pilot named Major Ployer Peter Hill, when on this date in aviation history, on October 30, 1935, the aircraft crashed.  Both pilots were killed, though several others on board survived with injuries.  An investigation followed and determined that the cause of the crash was a very simple thing — the control lock had been left in place.  This prompted a new consideration, however, and the realization that modern planes were simply complex to operate safely, even by two of the best test pilots in the world.  Something would have to be done. 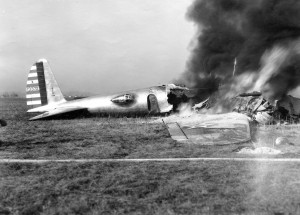 The Boeing Model 299 on fire after its crash at Wright Field on Oct. 30, 1935. The crash site was less than one mile from the runways of at Wright-Patterson airfield in Dayton, Ohio. Photo Credit: USAF Museum

Birth of the Flying Fortress

The Boeing Model 299 was a company-funded project to develop an idea offered by the US Navy — to create the equivalent of an “aerial battleship”, bristling with heavy guns and able to fight its way to targets, drop its bombs and fight its way home.  Boeing’s engineers considered the project carefully and then set about designing just such a thing.  By 1934, the US Army had issued a request for proposals for a bomber design to replace the Martin B-10, which was seen as outdated in comparison to the emerging designs of Europe’s leading air forces.  Boeing submitted its Model 299. 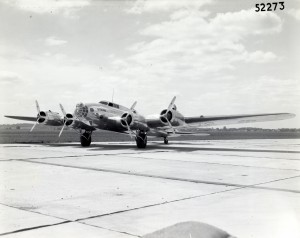 From the start, it was an impressive airplane.  It exceeded the Army’s requirements in almost every way.  With four engines, it was a robust machine, capable of taking damage and returning to base.  It wasn’t long before the “aerial battleship” was given a new name, the “Flying Fortress”.  The Army loved the design and, even with the crash, they wanted to buy them.  Yet the problem was significant — a four-engined bomber was, by definition, a very complex aircraft to fly.  If highly trained test pilots could forget such a basic thing as the control lock, the aircraft would almost certainly exceed the abilities of the average Army line pilot.  Put simply there were just too many things to remember. 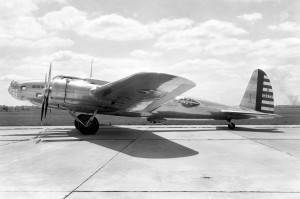 Side view of the Boeing Model 299. Photo Credit: USAF Museum

The solution that Boeing put forward was innovative and startling in its simplicity.  Prior to the Model 299, pilots learned the systems of aircraft and did them from memory.  This was fine when the start sequence was a half dozen or a dozen items, but when it involved four engines, numerous control system checks and dozens of individual steps, the Boeing test pilots were finding that it was all too easy to miss simple things.  The solution was to create a simple checklist — all of the items would be listed in the order they were to be performed and the pilots, for each operation, would consult the checklist, never again simply relying on their memory. 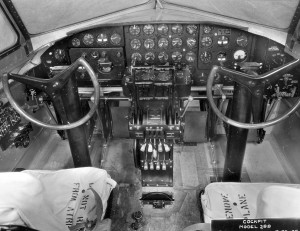 When the first checklists were introduced, the test pilots thought it was insulting to their ability, but they also remembered well what had happened to Leslie Tower, among the best in the entire company.  If Leslie Tower could make a mistake and die as a result, then it could happen to any of them.  As the pilots practiced and perfected the techniques of using checklists, they also found that there was a new reliability to the patterns, which increased the margins of safety and also allowed them to more quickly get through the start-up sequence.  It reduced workload as well, giving them more time to fly the plane and scans the skies for other aircraft.  One by one, checklists were added — not just for take off, but for landing, for cruise, for bombing, for priming guns and even for dropping bombs.

It was a revolution.  In 1942, at the beginning of the air bombing campaign over Europe, LIFE Magazine published the B-17 Flying Fortress checklist in its August issue.  On reading it, one wonders how anyone, even a top test pilot, could have possibly remembered everything required. ==> Click to View Checklist. 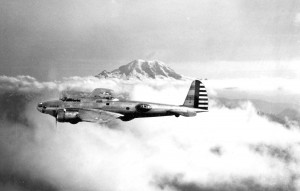 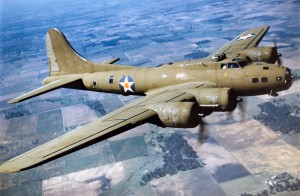 The Boeing Model 299 was redesignated the B-17 Flying Fortress.  Along with Consolidated’s B-24 Liberator, it formed the mainstay of the US Army Air Corps and US Army Air Forces heavy bomber forces during World War II.  Eventually it was replaced by the Boeing B-29 Superfortress, a plane arguably more complex than the B-17 by a mile and a meter.  In an unbroken chain, the Model 299 has been the plane from which virtually every bomber in the USAF has descended — as well as the bombers of the Soviet Union (which copied the B-29s and began a long tradition of Soviet bomber designs).

While the idea of the “Aerial Battleship” looks good on paper, why didn’t it work in the air?


Take off distance for an airplane of that size would have been far too great for an aircraft carrier, even with a modern launching system.


I disagree about the battleship comment. Aircraft weight constraints disallow armor and limit armament, while air operations preclude resupply once the mission begins and do not provide the option of laying-to or being towed during damage control, or screening and diversions. Furthermore, while the earth’s curvature permitted some limitations to early detection of watercraft, the location of the aircraft, as well as its raucous sound signature, rather strongly obviated stealthy approach.