The commanding general of the Alaskan Air Command, Major General William D. Old, USAF, squared off in front of his new Special Projects Officer, Lt. Col. William Pershing Benedict, USAF, who had joined the command just a month earlier.  The General wanted to know, can it be done, to fly and land a plane on the North Pole?  Lt. Col. Benedict, a California boy, looked at his commanding officer in the eye and replied, “As long as you give me everything I want and the people I want, I can do it.”  The general nodded — the reputation of the Air Force was at stake, after all, since the Navy had just tried and failed with one of its P2-V Neptune aircraft.  At the end of March 1952, a US Navy plane crashed and had to be abandoned at T-3.

A flight to be first to land at the Pole would fit the bill, that was sure enough — though even Maj. Gen. Old wasn’t sure it could be done.  Without blinking, he gave Lt. Col. Benedict the authority he needed, classified the project and code-named it, “Operation Oil Drum”, a suitably unsuitable name that would camouflage the actual purpose of the mission.  If it failed, it wouldn’t be for lack of trying — except that Lt. Col. Benedict had no intention of failing. 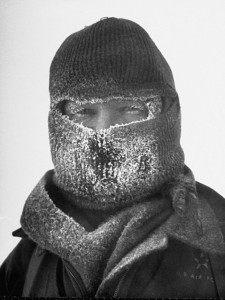 The first task before Lt. Col. Benedict was to choose his copilot, the man who would help him plan and fly the operation.  In the entire USAF, there was no better choice than Lt. Col. Joseph O. Fletcher, a pilot and meteorologist who, only a month before in March 1952, had established T-3, what became known as “Fletcher’s Ice Island”.  It was a floating ice base manned by USAF personnel near the North Pole.  To set it up, Fletcher had flown there and made a landing on the ice.  Subsequently, it remained occupied for another eight years as it drifted around the Arctic, providing for the Strategic Air Command much needed weather reporting over the Pole in the era before satellites — a requirement since SAC’s war plan had heavy bombers flying polar routes into the Soviet Union to drop their nuclear bombs at the start of World War III. 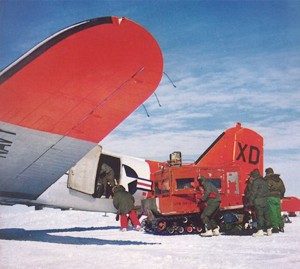 A US Navy Douglas R4D-5L (the Naval variant of the DC-3/C-47 Dakota) that was used in Antarctic research flights; the US Navy was unable to “beat the Air Force” to the Pole, however, it did extensive work in Antarctica. Photo Credit: US Navy

Both Benedict and Fletcher were experts with the C-47 Dakota, having had extensive experience flying the type during the war and afterward.  Fletcher’s ice landing at T-3 had been accomplished with a C-47 that had been fitted with a special set of wheeled skis — the plane could take off on a regular runway, then land on the ice and vice versa.  As flight crew, the men together selected a range of expert personnel who had experience in Arctic and cold weather operations.  These included:

In the event of an emergency, the men staged a second ski-equipped C-47 Dakota to stand by on T-3 “Fletcher’s Ice Island” which at the time was 100 miles from the Pole.  Capt. Lew Erhart, USAF, with a full crew of search and rescue personnel on board from the 10th Air Rescue Squadron out of Elmendorf AFB, Alaska, would be be in constant radio contact with the plane, ready to fly out if needed.  In the event of a problem, the rescue plane would be only one hour away. 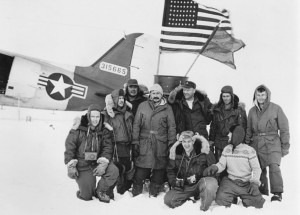 As it happened, Operation Oil Drum had a first failure — the plane was forced to turn back after mechanical problems.  Having effected repairs, they tried again on May 3, 1952 — today in aviation history.  That day, the ski-equipped C-47 Dakota took off and flew north.  The navigator, 1Lt. Herbert Thompson, took multiple sightings as they flew, correcting the course and leading them to precisely to the North Pole.

From there, it was a matter of selecting a landing spot that was flat enough for the C-47.  They orbited and found one near the Pole, lined up and made a perfect landing.  They taxied up to within perhaps 30 feet of their destination, climbed out and walked to the Pole.  The ten men on the flight were the first Americans to have stood there at the “top of the world”.  Fittingly, they placed an empty oil drum at the precise spot that marked geographic north and erected two flags — an American flag and a USAF unit banner.  The team remained at the North Pole for over three hours.  While there, they collected ice samples, recorded weather data and winds and then returned to the plane.  They climbed back aboard and took off, radioing to the rescue plane a report that all had gone well:  “Expedition instructions carried out.  No sweat.” 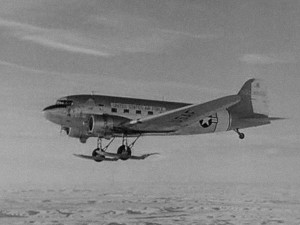 A USAF C-47 on Arctic duty, fitted with wheeled skis, which are clearly visible in this photograph.

The USAF made good use of the flight, achieving the public relations goals by putting the service into the newspapers while at the same time upstaging the US Navy.  In the wake of the flight, USAF Arctic operations would continue to expand.  Though the USAF would dominate Arctic news for a time, a six years later the US Navy would seize the interest of the world on Arctic matters with it own, incomparable feat.  In 1958, the Navy’s nuclear submarine, the USS Nautilus (SSN-571), would sail under the North Pole, making an 1,830 mile journey from California to Greenland.  As for the USAF, it had nothing to match the Navy’s achievement.

The US Navy Douglas R4D-5L that was abandoned during Operation Ski Jump II in March 1952. Here, the aircraft is undergoing maintenance before recovery by the Soviets (the men in the photo are Soviet). Photo Credit: Unknown Soviet Photographer

The USAF learned later that the Soviets had beat them to the North Pole and landed there in 1948, four years prior to Benedict’s and Fletcher’s flight.  On April 23, 1948, Aleksandr Kuznetsov and 23 crew landed near the North Pole and, much like was done in Operation Oil Drum, walked the remaining short distance to the Pole.  A few years after the Americans abandoned T-3 “Fletcher’s Ice Island”, the Soviets arrived and recovered the downed US Navy plane, repaired it, flew it out and put it to work in the Arctic.  Six months later, it crashed again and was abandoned in situ.

Even today, claims of who did what and who owns which rights in the Arctic are disputed — ultimately, it didn’t matter who arrived at the North Pole first, what mattered more was who has the mineral and oil right under the ice cap.  And then there is the question of Wrangel Island — but that’s another story….

Why do historians believe that Lt. Colonels Benedict and Fletcher and Dr. Albert Crary were the first Americans to stand on the North Pole when there are at least two other journeys earlier, including the Byrd Expedition?


Thanks to 1st Lt. Herbert Thompson, the navigator, who was able to tell the pilots where to go by those repeated sextant sights and his celestial navigation skills. That was and should still be an important and perishable skill that was used in SAC since the electromagnetic pulse caused by detonation of nuclear weapons was known to disrupt electronic equipment function. We should not ignore the fact that as good as GPS is providing our position information, the satellites do not have an infinite lifespan. Sequestration impacted the construction and launch of the current generation of replacement satellites, so it would be well to maintain some skills with sextant and celestial navigation in these times, too.


Thank you for posting this up. I knew Harold Turner personally. He taught me how to fish when I was a little boy in Alaska. He lived beside Willow Lake, in the Copper River Valley for many years. He was also a great pilot. Buzzed our home on the Richardson Highway many times!
He had a plaque of the flight hanging in his cabin. He had a daughter, Becky.