Pierre Daucourt’s flight from Paris to Berlin, having spanned 895 kilometers in a single day from sunrise to sunset, was the leading candidate for the Spring 1913 Pommery Cup prize, the fifth of six such awards, each carrying a sizable monetary award.  Daucourt rested and waited, enjoying the moment as the flying world awaited news of any other challengers.  Then the reports of other contenders began to filter in.  There were many familiar names, highly capable aviators with aircraft that could conceivably match or exceed his distance.  There was Grazzioli in his monoplane, a plane he had designed and built himself.  From Switzerland, there was Herr Schemmelon who would make an attempt to fly east, deep into Russia, on his Schemmel-Ruchonnet monoplane.  M. Marty announced that he planned a flight in his 100 hp Anzani powered Caudron biplane, a powerful contender.  As well, Jule Vedrines, Gilbert, Guillaux and Brindjonc des Moulinais all had earlier announced their intentions to compete.  There was even word that Edmond Audemars might make another go of it.

Pierre Daucort could not rest easily.  If the stiff winds held, most of the others would not be able to challenge his record.  Strangely, it seemed that all of the aviators were pressing to set a distance record by flying east, directly into the teeth of the headwinds.  Thus, it may have been the first time in history that a pilot prayed for bad weather, yet it was exactly that wish that hovered quietly in Daucourt’s circle of friends.

Guillaux in his monoplane sets out to compete for the Pommery Cup in late April 1913. Source: Flight

Harsh Tests in the Skies

It was not long before word came to Pierre Daucourt that Brindejonc des Moulinais had recorded a distance of 900 kilometers, having flown from Villacoublay to Quakenbruck airfield at Hanover, Germany.  That was enough — just five kilometers farther than Daucourt’s record, but a record was a record after all.  A few days later, when the weather had sufficiently cleared on April 30, 1913, it seemed that almost all of the challengers launched a final attempt.  Daucourt considered another flight, too — the winds continued to blow strongly, however, which dogged the aviators even as they took off, one by one, from different, distant airfields across France and Germany.  Word came in that also earlier, like Brindejonc des Moulinais, another famous pilot, Maurice Ernest François Guillaux, had flown.  He had taken off from Biarritz, heading toward the Netherlands — how far had he gotten?

The Swiss pilot, Herr C. Schemmelon flew from La Vidamee aerodrome in his Schemmel-Ruchonnet monoplane, known as the “Cigare” due to its graceful, long and narrow tapered fuselage.  It featured a 60 hp Verdet rotary engine.  He hoped to reach the border of Russia and fly onward.  If he could achieve that — and indeed his aeroplane had a reasonable chance to make it — his would likely be the record to beat.  He had made excellent time and covered 400 kilometers, nearly half the distance of Daucourt standing record.  However, at Retsdorf, near Cologne, Herr Schemmelon was forced down.  Surprisingly, the local authorities refused him the right to depart again while they made inquiries into his purposes and clearances to fly into Russia.  He was detained for hours while everyone waited for confirmation that the flight was authorized.  Finally, with the afternoon hours waning, he simply gave up and flew back to La Vidamee, his hopes shattered by red tape more than by weather or the unpredictable nature of flight.  He had managed 400 kilometers. 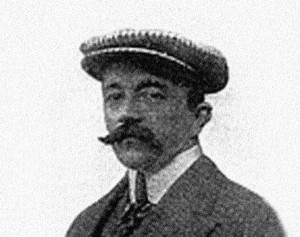 Abel Grazzioli’s plan was a wiser choice than the others.  He would fly from Issy and head north, tracking perpendicular to the wind, rather than against it.  In this way, he would be able to cover more distance per hour.  All went well until he reached Belgium — just 125 kilometers into his distance flight.  He landed at Neuville-Coppegueule, intending to rest for a few minutes.  The winds, however, were stronger than farther south, near Paris, and though he made a good landing, on his departure, wind gusts pressed his aeroplane off the edge of the field.  He crashed into a tree.  His aeroplane seriously damaged, Grazzioli was taken to the hospital, though it was more precautionary since he was not seriously hurt. 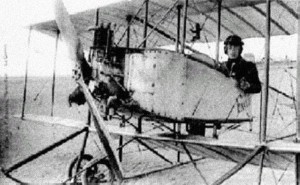 Philippe Marty in his Caudron biplane.

M. Philippe Marty’s flight from Le Crotoy proceeded apace, despite the winds.  Finally, as he neared Dusseldorf, the winds were simply too strong.  With 375 kilometers of flight completed, he set down in a field and secured his Caudron aeroplane.  Even with its powerful 100 hp Anzani, it was no match for the winds that some described as gale force.  Likewise, Jules Vedrines made excellent progress, departing Lyon and making it as far as Rouen before he set down, tipping his hat to the winds as being the main challenge of the day.  He had covered 525 kilometers.  Gilbert flew from Amberieu to Doullens, a similar distance, but also was forced to give up. 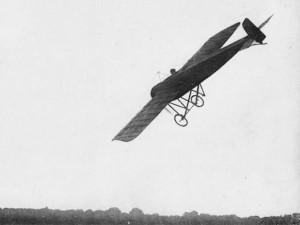 Word finally reached Daucourt of the flight made by Maurice Ernest François Guillaux on April 27, three days earlier.  The Frenchman had taken off from the southwestern corner of France from an airfield at the Atlantic coastal town of Biarritz.  From there, he had headed north-northeast hoping to make the Netherlands.  With the winds from his right, rather than in his face, he had made excellent speed.  The gale force winds that would come later had yet to materialize at that time and so he had flown relatively unimpeded.  His “all-metal” Clement-Bayard monoplane, powered by either a Clerget rotary engine or a 70 hp Gnôme (contemporary sources disagree!), was fast and capable — his fuel tank was sufficient to allow him a minimum of stops en route.  With only two stops along the way, he reached Kollum in the Netherlands. 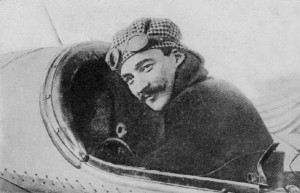 Guillaux’s flight had spanned a total of 1,229 kilometers, easily having bested the marks laid down by Daucourt and Brindejonc des Moulinais, having gone 300 kilometers further before sundown.  Thus, in May 2013, with much fanfare, the Pommery Cup prize was awarded to Guillaux for the farthest distance flown during a single day.  What would come next, six months ahead, was the final of six runnings of the Pommery Cup.  The entire continent of Europe, it seemed, was following the competition — new records were to be laid down, no doubt.  The pilots who had previously competed began the long process of acquiring newer aeroplanes, upgrading engines, practicing long distance flights and more.

The sixth and final Pommery Cup would be a fierce test — the best among them would prevail.


We are commemorating Maurice’s time in Australia April-October 1914. He gave many spectacular exhibitions, pioneered seaplane flying, and most importantly flew Australia’s first airmail from Melbourne to Sydney, July 1914. We are re-enacting that flight. His amazing achievements in Australia were overshadowed by the outbreak of World War I and other factors and we are collecting a lot of historical information on the way.
Tom Lockley