The news bulletin began innocently enough with the heading: “Bleriot’s New Launching Device.”  What it described, however, was something that in other times might have been a matter of greatest secrecy.  Unexpectedly, Louis Blériot, the first man to fly the English Channel in a powered airplane, had developed a system for launching and recovering aircraft from the decks of the naval ships.  The British War Office and Admiralty proved to be very interested in the development — all the more so because it might mean that the French were racing ahead of Britain in naval air power.  And Blériot, ever the entrepreneur, was eager to find a market for his latest invention.  However, despite its obvious potential, Blériot’s venture was ill-fated.  Like many other early efforts at pioneering new solutions for naval aviation, it would soon be forgotten, nearly lost in the annals of aviation history. 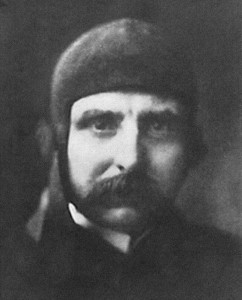 Louis Blériot in his flight helmet.

Blériot’s little known naval innovation was revealed in a rather short article appeared in the August 2, 1913, issue of Flight, the newsletter of the Royal Aero Club, which landed in mailboxes throughout the United Kingdom 100 years ago today in aviation history.

The Blériot demonstration made to the War Office and Admiralty in England was anything but a live appearance with airplane and apparatus.  In fact, it was surprisingly limited to just a short film, coupled with a discussion afterward by Louis Blériot himself.  The article in the newsletter Flight described it well, leaving little to the imagination:

“At a private cinematograph demonstration on Monday, at which representatives of the War Office and Admiralty were present, pictures showing trials made with the launching and alighting device invented by M. Bleriot were shown.  In the first series of pictures Pegoud was seen using the original arrangement in which a hook above the cabane caught on a trapeze which ran along a line suspended at Buc.” 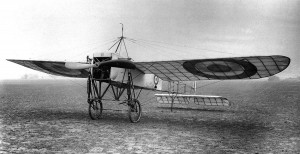 A Blériot XI with the RFC; the War Office proved a keen buyer of Louis Blériot’s proven designs.

The first system in the film, however, had already been replaced with an improved version, which was also on the film.  Flight described that modification and improvement as follows, complete with a write up of how the pilot was to fly from and land upon the device:

“This idea has now been superseded by a double claw arrangement mounted above the cabane.  The pilot steers his machine under the cable and then elevates, the cable being guided down to the claws by a pair of curved horns.  In starting, the machine runs along the cable until the flying speed is attained, when the claws are released and the machine, after just dipping slightly, flies off in the ordinary manner.”

Adolphe Pégoud in a Blériot, probably at Buc.

Whether or not the terms,”flies off in the ordinary manner” were really accurate is something of a question.  In fact, the line, just 80 meters long, was mounted between two towers — once unhooked, the pilot had to quickly turn to avoid hitting the second tower.  Despite the shortcomings of the system, the French flyers at Buc had developed something of interest and with Adolphe Pégoud flying a trusty Blériot XI variant in the films, the system clearly it appeared to be a reasonable for naval use. 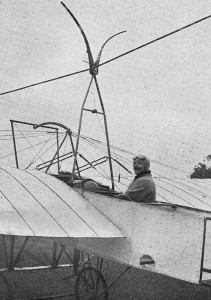 An exceedingly rare photograph of Adolphe Pégoud in a Blériot XI equipped with the cable launching device — at the top can be seen its distinctive pair of horns and the launching cable.

The article in Flight continued with a brief discussion of the potential uses of the device and how it might be mounted on ships:

“The device is intended for use on warships, in which case the cable would be suspended over the side of the vessel by means of booms.  The French naval authorities are taking a great deal of interest in the device, and experiments are shortly to be carried out on a French battleship.”

In fact, the idea of using booms mounted sideways on the vessel overcame the natural difficulties that resulted from the two tower system that had been shown in the film.  With the booms, no obstacle forward or behind would limit the pilot’s approach and departure.

While it might well have worked, sadly for Louis Blériot, none of the systems were ever sold. 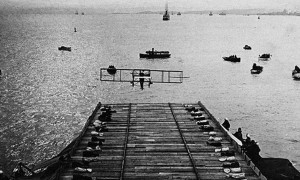 American tests of “flying off” platforms included the first take-offs and landings; in this photo American pilot Eugene Burton Ely approaches a deck with arresting wires strong across it, another critical invention for naval aviation.  Source:  US Navy

Ultimately, the British had a few ideas of their own, mainly based on the American pioneering efforts with “flying off” platforms.  Such decks were mounted on British ships just before the outset of the Great War (World War I).  The idea was taken from the Americans, who, on November 14, 1910, nearly three years before Blériot’s system, managed the first take off from a ship-mounted platform — this was from the cruiser USS Birmingham.  By January of 1911, the Americans had landed on the decks as well.  The rest of the naval world would soon follow suit, even if seaplanes remained the primary focus of naval air power.

Seaplane tenders and other vessels would carry aircraft into combat during the Great War.  It wasn’t until February of 1917 that the British pioneered the world’s first true aircraft carrier — well, sort of.  With a rather lengthy addition of a flying off deck mounted ahead of the main superstructure of a light cruiser, the British began a long linee of innovations that resulted in today’s, modern aircraft carrier designs.  By August 1917, the first plane had landed on the decks of the cruiser in question — HMS Furious.  By the end of the war, a second aft deck had been mounted, which was termed the “landing on” deck.  This was ultimately modified in 1922 to become a single, continuous deck. 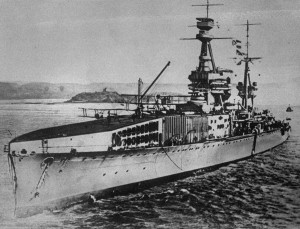 Heavily retouched photograph of HMS Furious with its aircraft deck on the bows.

The catapult system that would be widely adopted despite Blériot’s best efforts with his line system.  Yet catapults, contrary to common wisdom, were not developed by the British.  It may come as a surprise that the first airplane catapult was pioneered by the Smithsonian’s Secretary and famous early aviation pioneer, Samuel Langley.  While Langley’s aircraft failed in its attempts to achieve flight, his spring-driven catapult system worked reliably.  Notably, a year later, the Wright Brothers would develop their own weight, pulley and derrick catapult system.

Most confuse the issue because the British invented the modern steam-catapult in the 1950s, a system that is still in wide use globally today, though it is now potentially to be replaced by a new generation of electro-magnetically based accelerators. 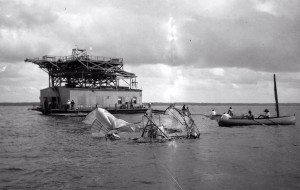 A towline drags the wrecked Langley Aerodrome machine after an unsuccessful test. The houseboat launchpad with its catapult on the roof can be seen. Source: Smithsonian

The rest is history, as they say.


Great article, I have never heard of the Bleriot system until now. During WWII, a similar system was used by the U.S. to launch and recover L birds, Cubs and such. I saw a video of this system in operation at the EAA fly-in at Oshkosh some years ago.

How about an article on the man carrying kites rumored to have been used and towed by ships in convoys to detect U-Boats?


This is a fascinating article about a little known phase of Bleriot’s career. The comparison to Eugene Ely’s shipboad adventures is interesting, however the photo of him landing on the USS Birmingham is mislabeled (an error originally done by the USN as well previously). The photo is actually of Ely landing on the USS Pennsylvania. If you look closely you will see sandbags at either side of the deck connected by ropes. This arresting system was devised by fellow Curtiss aviator Hugh A. Robinson who had previously used a similar system when doing his “Circle of Death” thrill ride on a bicycle and later motorcycle at County Fairs, etc. In fact, Robinson can been seen at the bottom left corner of photo, laying on deck!

Thank you for your posting. The argument you make is convincing; we had cited the photo based on the US Navy’s captioning, though, as you point out, that was erroneous. The fact that the cables are visible lends great credence to your statement and thus, we will amend the caption accordingly.