The Disaster of Operation White

The convoy had departed Gibraltar two days earlier at dawn.  Royal Navy Admiral James Somerville’s command included the aircraft carriers HMS Argus and HMS Ark Royal, escorted by the battle cruiser HMS Renown, the cruisers HMS Despatch and HMS Sheffield as well as seven destroyers.  Their mission, code-named Operation White, was to deliver twelve Hawker Hurricane fighters and two Blackburn Skua dive bombers to reinforce beleaguered Malta.  Still 400 miles to the west of Malta and in bad weather, Admiral Somerville received word that the Italian fleet had left Napoli to intercept his convoy of ships.  Seeking to avoid a naval battle, he issued the order to launch the planes — Malta was within range, if only barely.  Above all, however, he had to escape back to Gibraltar before the Italian fleet could attack.  Bravely departing into the gathering storms, the first flight of planes headed west and most made it to Malta.  An hour later, after being readied on deck, the second flight departed — and disappeared into history.

The year of 1940 was a dark and dangerous period for the Allies in the Mediterranean.  While Gibraltar remained in British hands, much of North Africa was in conflict.  The Italian and Germans were expanding their influence and control of the entire theatre.  Alone and defended by a small group of outnumbered fighter planes, Malta stood as a key strategic island.  The pilots and planes there were exhausted and in terrible condition, badly in need of reinforcements.

Thus, the idea of the “Club Run” was created — fighters and replacement pilots would be staged through Gibraltar, loaded onto the decks of the out-dated World War I era HMS Argus.  Escorted by the HMS Ark Royal and its covering fighters, the convoy would depart in a secret foray that would race near enough to the island for the planes to take off and make it to the airfield at Luqa.  The first such effort had achieved success on August 13, 1940 and now, a few months later, they were ready to try again.  This time, however, the Italians were waiting and watching.  Just four hours after the fleet departed Gibraltar, the Italian Navy received a detailed report of the movement of the ships.  The stage was set for an ambush at sea. 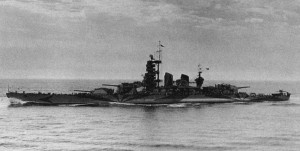 The Italian battleship Vittorio Veneto at sea — a grave threat to the Royal Navy.

Immediately, the Italians deployed two large battleships, the Vittorio Veneto and Giulio Cesare, as well as two heavy cruisers and a number of destroyers.  Racing east to take up station 35 miles southwest of Sardinia, they awaited the British fleet, confident in the superiority of their ships if a surface battle would result.  For air cover, the could count on the land-based Italian Air Force.  The hope was that they could ambush the British fleet and sink the Royal Navy’s two Gibraltar-based aircraft carriers.

As events developed, the Italian fleet and British fleets were probably just 70 miles apart when Admiral Somerville ordered the launch, having received news of the Italian fleet’s movements.  Had he not launched then, the story of Operation White might well have been a far greater tragedy since the weather would have prevented the effective use of the HMS Ark Royal’s fighters and bombers, leaving the British fleet under the guns of the Italian battleships.  Had the British convoy continued east, probably they would have been ambushed by the Italian Navy in just 3 to 4 hours time. 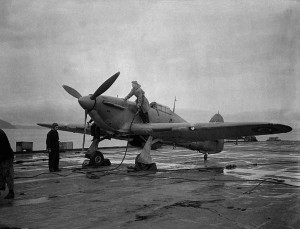 A Hawker Hurricane refuels on the deck of the HMS Argus.

Receiving their orders, the pilots of the Hawker Hurricanes and Blackburn Skuas measured the distance and finalized their flight plans.  At 400 miles, the island of Malta was certainly within range — in fact, the Hurricanes should have had about 45 minutes of fuel remaining on arrival.  The only problem was the weather, which made navigation less than certain.  Compounding the problem was that while some of the pilots were Battle of Britain veterans, others were relatively green — and at that time, most fighter pilots navigated by landmarks only and had little or no formal over water navigation training.

The flights would launch in two groups an hour apart to give time to spot and fuel the planes on the decks of the HMS Argus.  A Short Sunderland flying boat would meet the first flight en route — just 75 miles ahead at the Galite Islands.  The Sunderland would help navigate the fighter planes safely to Luqa Airfield.  The second flight would be met by a second airplane from Malta, a bomber that would depart with an experienced navigator on board as well.  Thus, the fighters from the HMS Argus expected to meet the escort about 30 minutes after departure and then fly the remaining 90 minutes or so to Malta. 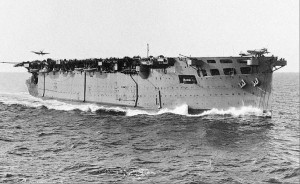 The HMS Argus, as seen during WWII with a Hawker Hurricane landing on its deck. This WWI era aircraft carrier served limited roles in the Mediterranean.

From the start, things didn’t go as planned.  The Hurricanes and Skuas in the first flight (and later second flight) used up one third of their reserve fuel taking off and forming up before they headed eastward toward Malta.  As well, with deteriorating weather, they flew at a lower altitude, just a few thousand feet over the waves.  This consumed more fuel than was desired.  Worse yet, the wind, which at takeoff had been a southern quartering tailwind, shifted around to a headwind, impeding their progress.  As it happened, they were met successfully by the Short Sunderland off the Galite Islands.  Just 12 minutes short of Luqa Airfield, still over the sea, the first of the Hurricanes ran out of fuel and ditched.

Abandoning the navigation mission, the Short Sunderland landed to pick up the pilot.  The other five Hurricanes and one Skua of the first flight continued on to Malta which soon loomed into sight.  However, four minutes after the first plane ditched, a second Hurricane ran out of fuel as well.  The Sunderland took back off and headed east toward Malta, hoping to search for the pilot of the downed airplane en route.  He was never found.  The Skua and remaining four Hurricanes landed at Luqa just 8 minutes after the loss of the second Hurricane, apt demonstration of the fuel limitations facing the men — the last four Hurricanes had scant minutes of fuel left at landing. 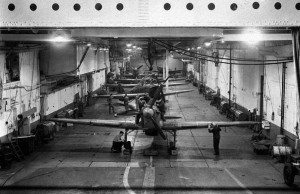 Hawker Hurricanes in the hangar bay of the HMS Argus.

Even as the first flight was joining up with the Short Sunderland, the second flight departed from the deck of the HMS Argus.  Six more Hurricanes and the second Skua were en route to the Galite Islands.  Earlier, the bomber had departed from Malta as planned for the rendezvous point.  As the weather continued to worsen, the six Hurricanes and single Skua of the second flight completely missed the Galite Islands, most likely having been pushed to the north by the wind.  The join up with their navigational escort had failed.  On their own and without sufficient navigation training or tools, the six Hurricanes and one Skua were soon lost over the empty sea, completely out of sight of any land and landmarks.  With fuel running out, they held to their heading hoping to find the tiny dot of Malta in the vast sea.

One by one, the Hurricanes ran out of fuel.  With each, the anguished radio calls could be heard on the HF sets on board the ships of Admiral Somerville’s fleet as well as at Luqa Airfield.  Yet there was nothing they could do — without the necessary equipment, Luqa could not get a radar fix on the planes and give them a heading to fly, nor could the Short Sunderland launch in time to help with an aerial search.  The Royal Navy fleet, with all of the equipment, was too far to the west, hundreds of miles away, and the planes were out of range of the ships’ radar systems.  Finally, only the single Blackburn Skua with its two man crew remained aloft.

The rest of the planes and pilots simply disappeared, ditched somewhere at sea, probably north of Malta.

Skua fighter (L2987) that crash landed near Syracuse, Sicily, after the ill-fated Operation White, on November 17, 1940.

With the loss of the six Hawker Hurricanes and pilots of the second flight, the lone two-man Blackburn Skua headed west for a time before turning north, hoping to find Malta or, barring that, to at least make landfall in Sicily, a much larger island.  As the pilot of the Skua flew northward, suddenly the coastline of Sicily came into view to his west.  Recognizing that they had insufficient fuel to try to turn around and make Malta, the crew descended toward the town of Syracuse and found a suitable landing spot.  As they closed in to land, however, the Italian forces opened fire with their anti-aircraft artillery.  Somehow, despite the close range AAA fire, the lone Skua made a successful crash landing.  The two British airmen were taken prisoner.

On his return to Gibraltar, Admiral Somerville would relate that Operation White was “a frightful failure”.  Of the twelve Hawker Hurricanes and pilots who departed from the deck of the HMS Argus, only four planes and five pilots survived the ordeal.  Both of the Skuas were lost as were two of the airmen — the other two were captured.  It was a disaster of the first order, though Admiral Somerville’s timely decision to launch perhaps averted a major naval engagement from which the British would have likely come off poorly.  After the last flight of Operation White, no further forays by sea were undertaken.  In the future, the RAF decided that air reinforcements would have to be flown in via a route that connected British land bases across Northern Africa instead.

The power of the Italian battleships was not overstated.  Just ten days after the disaster of Operation White, the Vittorio Veneto engaged a British Naval cruiser squadron of seven ships.  Firing a targeted barrage of just 19 shells from its big guns, the Royal Navy ships were easily overwhelmed.  Rather than risk near certain destruction, they elected to withdraw — this was the ill-fated Battle of Cape Teulada, which took place on November 27, 1940.  The Vittorio Veneto would continue to harass British shipping throughout the central Mediterranean until Italy’s surrender in 1943.  In all, she would make 53 sorties — the only serious damage incurred on her was from a Royal Navy torpedo plane, which had daringly closed to nearly 1,000 yards before releasing its torpedo.  The crew was then shot down and killed by the battleship’s AAA, though the torpedo hit from that close range.  That engagement in late March 1941 took the Vittorio Veneto out of the war for six months while she underwent repairs at Taranto.

Have the six Hawker Hurricanes from the ill-fated Second Flight of Operation White ever been located at the bottom of the Mediterranean Sea?


The aircraft landing on HMS Argus is a Supermarine Seafire! It actually crashed on landing, ending its flight nose up. The crash was caused by a mistake in navigation. The Royal Navy provided the navigation planning and route and this was the pilot’s second flight, so he was too inexperienced to recognize the error.

In an earlier operation from HMS Argus, the pilots actually refused to fly. In this operation the pilots obeyed orders and flew as directed. The Sunderland was also lost when it was strafed by Messerschmitt Bf-109s on landing.