Beneath the crowded streets of Stockholm, there’s an underground, rock-lined cavern that today serves as a concert and entertainment hall. But back in 1954, it was home to R1, Sweden’s first nuclear reactor. Hailed as the nation’s “Cathedral of Science and Technology”, R1 was built by KTH, Sweden’s Royal Institute of Technology. The public was told that R1 was for research only. Sweden was working on peaceful applications of nuclear fission. However, R1 was actually what was called a “breeder reactor”, a type that produces plutonium as a byproduct. Its real purpose was a closely guarded secret – Sweden was building the atomic bomb. 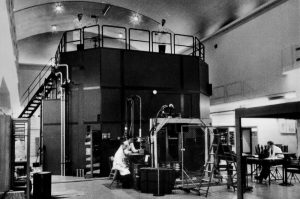 The Swedish breeder reactor, R1, in the basement of KTH in Stockholm.

As incredible as it may sound, Sweden, a country widely known for its commitment to peace and nuclear disarmament, for decades ran one of the world’s largest secret nuclear weapons programs. At its peak, the effort employed nearly 300 scientists full time at FOA alone. Hundreds of millions of dollars were spent. The effort rivaled the Manhattan Project in its scale, sophistication, and engineering. And it was so successful that for decades, unbeknownst to the public, Sweden was only a single vote away in parliament from becoming the world’s fourth largest nuclear-armed nation – behind only the Soviet Union, the United States, and the United Kingdom.

How can it be, we might ask, that Sweden, the peace-loving global leader of nuclear disarmament movements, was secretly building the bomb in its basement?

This article places the facts in context with the changing global security situation and offers fresh insights into Sweden’s aircraft development programs and the rationale behind its security policies. Sources include documentation released by the Government of Sweden regarding its past nuclear weapons programs to the International Atomic Energy Agency and what limited information is available in the media, such as newspapers and magazines both in the USA, Sweden, and elsewhere.

To answer that question, let’s start with a review of the essential facts: Sweden’s nuclear weapons program was managed by the Swedish National Defense Research Institute, known as FOA. It involved KTH with its R1 reactor and relied on support from Lund Universitet, Uppsala Universitet, the Karolinska Institute, and Chalmers in Gothenburg. As well, Sweden’s electricity companies and defense industries were deeply involved. Finally, Saab, the Svenska Aeroplan AB company, was tasked with building a nuclear-capable bomber for the Air Force. 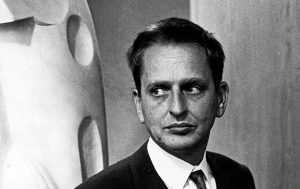 Olof Palme, who was the “Father of the Swedish Bomb”.

The program also involved some of the nation’s most well-known public figures. The Prime Minister, Tage Erlander, personally launched the effort in 1959. Olof Palme was the Secretary of the Working Group on Nuclear Weapons Development. Later, as head of the “S-Program”, he was essentially the “Father of the Swedish Bomb”.

Yet why would Sweden, a tiny country in Scandinavia, need nuclear weapons at all?

The answer to that is simple. Sweden is a neutral, non-aligned nation. It isn’t a member of NATO. And yet it was on the front lines of the Cold War. Directly across the Baltic Sea is the Soviet Union. And when you think about it, the Swedish Bomb program makes perfect sense. It was the country’s ultimate insurance policy against Soviet aggression.

The program got its start back in 1945, immediately after the bombings of Hiroshima and Nagasaki. At the time, Sweden realized that it would soon be caught between the United States and the Soviet Union. And with the dawning of the nuclear age, the only credible defense was to have nuclear weapons and a bomber that could deliver them on target. And that was Sweden’s biggest problem.

It took only 10 years to get to the point where it was ready to deploy its first bomb. However, it took 25 years to build a jet bomber that could take the bomb through Soviet air defenses and drop it on a target.

At the time, the view was that large, conventional military forces weren’t needed if you had the Bomb. Having nuclear weapons was seen as a cost-effective solution to national defense problems. As a result, from 1945 to 1949, the United States, confident in its security as the only nation that had the bomb, scrapped much of its military equipment and demobilized most of its forces. The Soviet Union, however, had no nuclear weapons yet was quickly emerging as a rival. 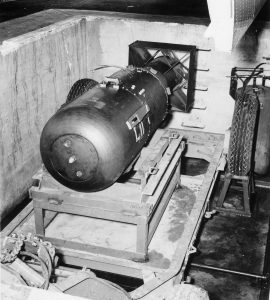 In 1948, the Soviets tested America’s resolve by blockading Berlin. While the Allies responded with the Berlin Airlift, the lesson was clear – America wasn’t about to nuke the Russians over Berlin, nor for that matter over any other passing security issue. Conventional forces mattered after all.

To counter the Soviet threat, NATO was formed in 1949 and, that very year, the Soviets tested their first atomic bomb. Just a year later, in 1950, the Korean War broke out. As for Sweden, while it trusted the Americans weren’t about to drop the Bomb on Stockholm, the same couldn’t be said about the Soviets. Sweden’s program kicked into high gear.

As it happened. Sweden was ideally suited for nuclear weapons production. Unlike most other nations, it could mine its own uranium from deposits of black shale within its borders. It had the necessary scientific expertise and, in fact, Sweden’s scientists were so expert that they chose to skip the usual step of developing a uranium-based bomb and they went directly to work on a more powerful plutonium-based model.

A year later in 1952, the United Kingdom conducted its first nuclear blast test in the Indian Ocean, codenamed “Operation Hurricane”. The UK was the third nation in history to have nuclear weapons.

In Sweden, the breeder reactor, R1, went live in 1954. It closely mirrored the design of America’s Oak Ridge Research Reactor and it was nearly as efficient. Less than a year later, Sweden had produced its first five kilograms of plutonium.

Still Sweden had a problem — while it was ready to deploy its first bomb, it lacked a bomber that could deliver it on target. 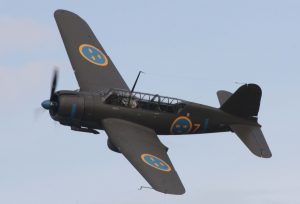 The Swedish Air Force had only one bomber in its inventory and that was the aging Saab 17, a pre-war, single-engine, propeller-driven plane that had been designed in the late 1930s. This was the jet age, however, and a plane like that was clearly not going to be up to the task. In a bid to catch up, Sweden tried converting its propeller-driven Saab 21 fighter into a jet powered variant. They called this the Saab 21R and while it proved to be a reasonably good fighter, it was never designed to carry the weight of an atomic bomb. 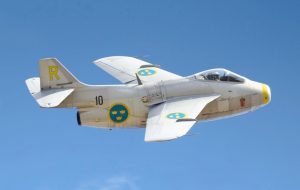 The lessons learned were applied to Saab’s next aircraft, the J 29 Tunnan, which first flew in 1948. Nicknamed the “Flying Barrel”, it looked ungainly but it was one of the finest combat aircraft of its age. Still, the Tunnan could only carry a light load of bombs. A dedicated jet bomber would be needed. 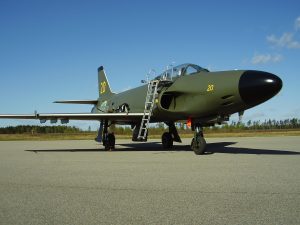 Saab’s next aircraft flew in 1951. This new plane was called the Saab 32 Lansen. It was designed to carry two RB04 missiles and early plans called for mounting a nuclear weapon on the tip of each missile. However, this quickly proved impossible.

A year later in 1952, the United Kingdom solved its own bomber problem with the new AVRO Vulcan. Likewise, America was designing its range of high-speed jet bombers and so were the Russians. However, while Sweden’s bomber efforts were proving more difficult, the nuclear weapons program got a further boost. The world’s three nuclear armed nations were undertaking dozens of atmospheric and underground nuclear tests at the time and as a result, what Sweden’s scientists couldn’t work out for themselves, its espionage agencies were able to bring home from abroad.

By copying the bomb designs of the other three nations, Sweden realized it didn’t even have to conduct its own test. It could just apply the test results it secretly had obtained from the others.

By 1954, shipments of weapons grade plutonium were being trucked to secret bunkers, going right through the streets of Stockholm, though the public knew nothing about it. Meanwhile, Sweden was testing and stockpiling all the components of its first bombs, ready for quick assembly.

But the question still remained — why deploy the weapons when the Air Force still had no way to drop the Bomb? 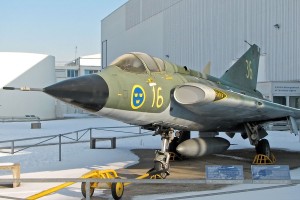 Saab’s next aircraft design was the J 35 Draken. The plane made its first flight that very year, in 1955. However, it was designed as an interceptor, not as a bomber. Still the Draken was capable of speeds greater than Mach 2 and, like its predecessors, it was an equal match for the best the Americans and the Soviets had.

On paper, the Draken could conceivably carry a single nuclear bomb under the fuselage, however, if it flew at the speeds required to penetrate Soviet air defenses, atmospheric friction would have heated the bombs up, possibly causing them to explode in mid-air. This is known as “cooking off” and to solve that problem, the Swedish Air Force requested that Saab build a dedicated nuclear bomber with a protected internal bomb bay. 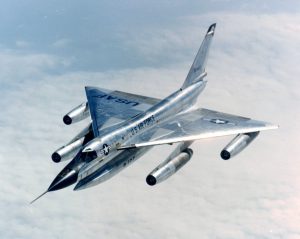 This would be similar to America’s B-58 Hustler, which at the time had just flown its first test flight. Saab quickly delivered two designs for what they called the A 36. The program was cancelled, however, when in 1957 a better design was at hand for a single seat jet fighter called the Saab 37 Viggen.

Also in 1957, Sweden signed on to Eisenhower’s “Atoms for Peace” program. Although the Americans required commitments to peaceful use and non-proliferation, covertly Sweden simply applied everything they learned to their Bomb program. 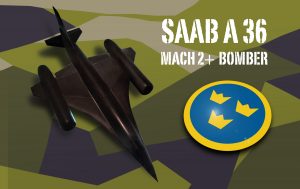 At the time, however, the global situation was rapidly evolving — the Swedish diplomat, Dag Hammarskjöld, was serving as Secretary-General of the United Nations. The Soviet Union and the United States were in an all-out arms race. America’s new B-52 Stratofortress was just entering service. As well, like Sweden, the Soviets too lacked a capable bomber. Nothing in the Soviet Air Force could reach beyond Europe. 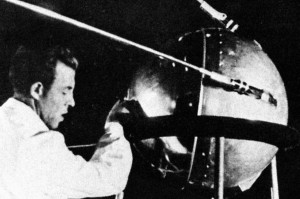 The solution, Moscow realized, was to look to space instead. Thus, in 1957 they launched their first satellite, Sputnik. The world was shocked and in the Pentagon, US Air Force planners realized that if the Soviets could orbit a satellite, they could just as easily hit any city around the world with a nuclear weapon. Instantly recognizing that missiles were superior to bombers, the US entered the Space Race too.

Despite all the public posturing, neither side was committed to peaceful exploration. This was about intercontinental ballistic missiles (ICBMs).

Sputnik put Sweden into an uncomfortable position. There was no way that the country, with a population of just over 7 million at the time, could compete in the upcoming Space Race. It also meant that a strategic bomber could no longer provide effective deterrence.

The answer was to restructure the country’s nuclear weapons for battlefield use and focus the nation on building a conventional army. Recognizing that it also faced Soviet biological and chemical weapons threats, Sweden also elected to respond to any non-conventional attack with nuclear weapons. As a result, as hard as it might be to admit it, Sweden had adopted a First Use Policy in the late 1950s.

Sweden had reached a turning point — public support for nuclear energy and, as it turned out, for nuclear weapons was strong. With ever-growing stocks of plutonium, Sweden’s Bomb program was no longer just a research project. It was a reality. It was time to bring the matter before the Swedish Parliament for a decision on whether Sweden should fully enter the nuclear armed age.

In Part 2 (coming soon) of this story, we’ll review what happened next. It’s a story that has many unexpected twists and turns, and in the end one of the most bizarre outcomes you could ever imagine.