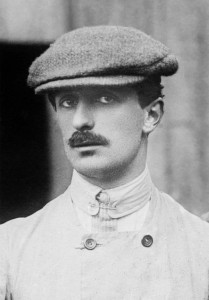 On this date in aviation history, Frenchman Gabriel Voisin was able to achieve the first ever flight of a powered aircraft — a seaplane — off of the surface of the water. Using a Voisin-designed Hargrave-type box-kite aircraft design that he named, “La Rapiere,” to which he affixed floats of his own design, Gabriel was able to make three flights — a 600 meter flight from Billancourt Bridge to Sevres Bridge at an altitude of 50 to 60 feet, and two shorter flights of 100 meters and 30 meters each.

Voisin would later write about the flight in his book, Mes dix mille cerfs volants (published in 1961), which was translated by Oliver Stewart for subsequent publication in England in 1963 as Men, Women and 10,000 Kites. Gabriel recalled the day with clarity:

Now, fifty-five years later, as I write these lines, I hear once more the lapping of the water against the sides of the floats…. I had the controls ready. I waited for a time and then I applied elevator. My lovely glider instantly left the water. In a few seconds I was as high as the tops of the poplars along the quay. I went along without oscillation either in pitch or roll. We were approaching the Sevres bridge. La Rapiere slowed and I alighted on the water without incident… I had flown from the Billancourt bridge to the Sevres bridge at an altitude of fifty to sixty-six feet.

Voisin would go on to become a major aircraft innovator and manufacturer in France, opening the world’s very first airplane manufacturing company, the Appareils d’Aviation Les Frères Voisin, with his brother, Charles (who would later be killed in an automobile accident). As Europe descended into the darkness of the Great War of 1914 to 1918, Voisin was awarded contracts to produce aircraft for the new French air force. His most successful military aircraft design, the Voisin III, served as a mainstay of the French air force.

After the Armistice, he abandoned aircraft design and production, citing the trauma of seeing his work put to use in the horrific mission of killing men in battle. Instead, he turned his attention to the automotive industry, setting up the company Avions Voisin, which (despite the name; avion in French translates to airplane in English) produced only cars — no airplanes. He became a highly inventive producer of cars whose designs rivaled those of Ettore Bugatti in terms of style and grace on the road.