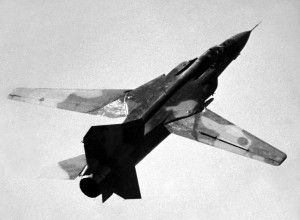 MiG-23 Jet Fighter, the type that was engaged in a nighttime dogfight off the coast of Italy.

Setting the Stage for the Shootdown

In 1980, the international community was arrayed against an increasingly belligerent Libyan government under the leadership of the dictator, Col. Muammar Qaddafi.  In the United States, the Jimmy Carter Administration was in its final year and embroiled in an election race against an upstart actor and former governor of California named Ronald Reagan.  In Europe, NATO was deeply engaged in the Cold War.  The Soviet Union had just invaded Afghanistan — it seemed that the world was on the brink of conflict.

For those nations along the Mediterranean Sea, Libya was a growing problem.  Qaddafi’s forces were increasingly involved in attempts to destabilize governments in the region, including many former French colonies in North Africa.  From the perspective of the French Government, the time had come to eliminate the problem of Qaddafi.

An Assassination of International Proportions

If new documents uncovered in Libya are to be believed, the opportunity to assassinate Qaddafi presented itself on the night of June 27, 1980, when he was scheduled to fly home from Europe and across the Mediterranean in his personal Tupolev airliner.  A pair of French Mirage jet fighters were readied for a very special mission — Qaddafi’s jet would be intercepted and shot down, leaving all parties involved with plausible deniability.  If all went well, the wreckage would be lost at sea and the action would resolve the Libyan problem once and for all.

From the start, however, things didn’t quite go as planned.  What should have been a simple interception turned into a confusing engagement with jet fighters involved from no less than four nations.  The French, the Libyans, the Italians and the Americans would all converge toward a single point over the sea off the coast of Italy — and flying into the melee would come Itavia Flight 870, completely unaware of the unfolding drama ahead.

Unbeknownst to the French, however, their assassination attempt was doomed from the start.  According to the newly uncovered Libyan documents, Qaddafi was tipped off at the last moment about the plot by someone from within the SISMI, Italy’s secret service. Thus, Qaddafi made a snap decision and diverted his plane to land on the island of Malta. Notably, the SISMI maintained a degree of influence through high level contacts within Libya. Italy continued its close ties with Qaddafi for years — in 1986, Italian politician Bettino Craxi would phone Qaddafi to warn him of the incoming USAF F-111 raid — once again with the help of the Italians, Qaddafi would survive by fleeing his compound minutes before the bombs hit.

On that night in 1980, a Libyan Air Force MiG-23 fighter jet was already flying north to meet and escort the Qaddafi plane home to Libya, when he diverted to land in Malta.  Somehow, in the confusion of developing events, the MiG-23 pilot, Ezedin Koal, was neither notified nor ordered back to base.  Instead, he flew north across the Mediterranean Sea, searching for Qaddafi’s Tupolev.  On the NATO side of the equation, the Libyan MiG-23 was immediately picked up as “fast mover” on air defense radars.  As per standard protocol, the Italian Air Force and US Navy dispatched fighters to intercept the plane as it neared Italian airspace.

Minutes later, the Libyan MiG-23 was already off the coast of Sicily.  Concurrently, three Italian Air Force F-104S jet fighters and at least one US Navy A-7 Corsair II (probably this was a flight of two aircraft) closed in separately from the east.  The two French Mirage aircraft raced in from the north with the dark intent to perform their deadly assassination mission.  Yet now, no fewer than seven and possibly as many as nine NATO fighter planes were converging on a single point on the map in the night skies over the Mediterranean Sea — and, completely unknowing, into the midst of the developing melee flew Itavia Flight 870.

Apparently, the Libyan MiG-23 pilot was first to spot the civilian DC-9 airliner on his radar.  The aircraft was heading southward as expected.  For the Libyan pilot, it was right where it should have been.  He turned his MiG-23 to join into close formation with the airliner, which he apparently mistook for Qaddafi’s Tupolev in the darkness of the night skies.  For the French fighter pilots, this newly formed up pair of aircraft exactly matched their mission expectations — there was a large airliner sized target, clearly Qaddafi’s Tupolev, escorted by a single Libyan jet fighter that had joined up from the south.  Together, the two targets were flying southward in the direction of Libya.

No warning shots were fired — this was to be an assassination, pure and simple.  One of the French pilots launched an air-to-air missile aimed at the larger target.  The missile struck home, hitting the forward section of Itavia Flight 870 with a perfect hit.  The airliner never stood a chance — it was literally blown out of the sky.  As the French Mirage pilots watched the fireball appear and disappear in the distance, their radars showed the Libyan MiG-23 break off and circle out into a counterattack.

There was only one loose end to tie up — they would have to shoot it down as well….

Upon seeing the missile impact the airliner nearby, the Libyan MiG-23 pilot, Ezedin Koal, pulled away, searching for nearby enemy aircraft.  In every direction his nose would have pointed, the radar would have suddenly shown more enemy fighter jets.  A flight of three Italian F-104S Starfighter aircraft closed in from one side while one or two A-7 Corsairs from the US Navy came from another direction.  Two French Mirage fighters pressed in from the north, their radars lighting up his early warning radar receiving systems as they tracked him and prepared to fire.  From Ezedin Koal’s perspective, he was alone and in deep trouble.  With few options, he would have to fight and somehow escape to the south.  The odds of survival were clearly slim.  There could have been no doubt of the hostile intent of the enemy aircraft — after all, they had just shot down and, in his mind, assassinated Col. Qaddafi himself, the very man he was to escort and protect.

What followed was a confusing series of high speed maneuvers and counter-maneuvers in the dark night skies over Italy.  The French and Libyan jets maneuvered over the water in a turning dogfight while US Navy and Italian jets circled.  The fight shifted eastward over the Italian mainland before the MiG-23 was finally either shot down or driven into the mountains that were hidden in the shadows of night below.  Ultimately, the Libyan MiG-23 would crash into the Sila Mountains in Castelsilano, Calabria, located in the center of the lower boot of southern Italy.  In a flash, Ezedin Koal would be killed in the crash.

Their mission accomplished, the French Mirage fighter jets turned to fly northward to France.  With the last loose end tied up, it seemed assured that there would be no witnesses to their assassination of Muammar Qaddafi.

The MiG-23 (code-named “Flogger”) represents the Soviet Union’s next stage of aircraft development in the wake of the MiG-21 “Fishbed”, a light-weight, agile interceptor purpose-built to counterbalance the potential of USAF bombers from penetrating Russian airspace.  While the MiG-21 was designed to take off, climb to altitude, point its nose at an incoming wave of bombers and fire missiles, this was shown to be insufficient to the challenges of aerial warfare in the late 1960s and 1970s.  What was needed was a more maneuverable interceptor that could fly fast, maneuver well and carry a sufficient load of weapons.  Thus, the swing-wing MiG-23 design was born.  What it lacked in sophistication, it more than made up for in affordability — the top of the line model was sold at just $6.6 million each, making it one of the most affordable combat fighters in modern history.  As a result, almost 5,000 were built and the aircraft was employed by no less than 36 air forces around the world.