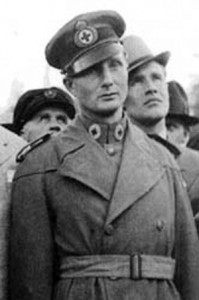 Today in aviation history in 1977, the 13th of July (it was a Wednesday in 1977, by the way), marks the death of a true aviation hero.  While on a refugee aid mission, Swedish citizen Count Carl Gustaf von Rosen was killed in a surprise guerrilla attack in Gode, Somalia. Although Count von Rosen had a long tradition of aiding refugees, he also went considerably beyond the traditional definition of charitable “aid work” such as providing food, medicines and other relief supplies.  Instead, Count von Rosen, a skilled pilot, never shied away from providing direct military assistance by personally taking action in combat against those responsible for creating the refugee problems in the first place.

Born in Helgesta, a small town in Södermanland, Sweden, Carl Gustaf was the son of the Swedish explorer, Eric von Rosen.  Incredibly, he was also the nephew of Carin Göring — this was Eric’s sister, the devoted wife of Nazi General and Luftwaffe chief, Hermann Göring.  Not surprisingly, the von Rosen family’s politics were decidedly pro-Nazi.  In fact, they were key figures in promoting Sweden’s fledgling National Socialist Party in the 1930s.  In a strange coincidence, the von Rosens even adopted the swastika as the family’s personal symbol — but this was years before the creation of the Nazi Party in Germany and, in fact, when the Nazis selected the same symbol for their flag, it was a complete coincidence. 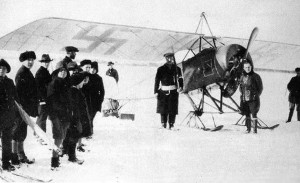 The first airplane of the Finnish Air Force, the Thulin D, donated by Eric von Rosen.

Eric von Rosen, Carl Gustaf’s father, would also be forever remembered in Finland because in 1910 he donated  the first airplane to the new Finnish Air Force, a Morane-Saulnier MS Parasol/Thulin D.  On the wings of the airplane, von Rosen painted that very personal symbol — a blue swastika on a white field.  This would become the markings of Finland’s new air force, remaining in use until the end of World War II (sometimes this is confused with the Nazi swastika, even if Finland would go to war with Nazi Germany in the mid-1940s).

The “Black Sheep” of the von Rosens

While his father was an avowed Nazi, however, Carl Gustaf was considered the “Black Sheep” of the family.  He rejected their views outright.  Although he had originally been inspired to learn to fly by Hermann Göring, earning his pilot’s license in 1929, he quickly recognized the inherent evil of the Nazi government and fascism.  Seeing the alliance of Hitler and Mussolini developing, he joined a relief mission to Ethiopia after Italy’s invasion, flying airlift missions for the Red Cross.  On some of the return flights, he evacuated casualties from the battlefield, even under fire.  On one of these missions, he was injured in an Italian mustard gas attack (a well-documented case of chemical weapons use in the conflict that soon thereafter would blossom into World War II).  After the end of the fight in Ethiopia, he joined KLM as a pilot.

When World War II broke out, in an effort to bolster Finnish independence, Count von Rosen purchased three aircraft to donate to the Finnish Air Force — one Douglas DC-2 (DO-1) and two Koolhoven FK.52 (KO-129 and KO-130).  He converted the Douglas DC-2 to a bomber and then volunteered to fly it in Finland’s air force, where he was commissioned a Lieutenant.  He dropped bombs on advancing Soviet troops during the Continuation War before leaving for England.  In London, he signed up as a volunteer for the Royal Air Force.  Due to his family’s relationship with Hermann Göring, however, he was rejected.  He returned to KLM and flew its London to Lisbon route, which sometimes was at risk from Nazi interception.  Meanwhile, his Dutch wife joined the Dutch resistance and fought against the Nazis.  Whereas he survived the war unscathed, she was killed by the Nazis. 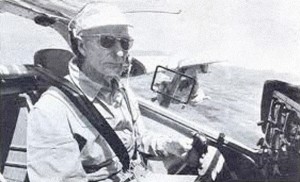 Flying for the United Nations

After the end of World War II, he returned to a newly liberated and independent Ethiopia and helped organize its new air force, training its pilots.  When Sweden’s Dag Hammarskjöld became the second Secretary General of the United Nations, Carl Gustaf von Rosen served as his personal pilot, a role he performed perfectly.  Sadly, on the day it might have most mattered, von Rosen was grounded from a temporary illness — the Secretary General flew to the Congo for peace negotiations with another pilot and tragically, the plane crashed some miles from the runway (sabotage has always been suspected).

In 1969, Count von Rosen would again take up an activist role, this time during the Biafran conflict that pitted Nigeria against one of its breakaway provinces.  The Nigerian government attempted to strangle Biafra by imposing an economic blockade on the region.  The result was mass starvation.  The sight of emaciated and dying children brought von Rosen to action.  First, he flew aid missions, at least once flying to Biafra at wave-top height to avoid detection.  While in country, he saw the Soviet-backed Nigerian Air Force bombing and strafing civilian villages at will.  Rejecting such brutality, he decided to personally intervene.

Once again, Count von Rosen would take action in a way that few others would have considered.  He returned to Sweden and acquired five Saab Malmö MFI-9B trainers, a piston-engine aircraft.  He had the planes converted for ground attack missions.  This involved mounting machine guns and affixing pods for 12 French-made 68mm rockets under the wings (six on each side).  Green paint schemes and other modifications were completed once the planes were shipped to Gabon.  As the commander of the Biafran Air Force (or BAF, as he called it), von Rosen recruited two other Swedish pilots plus an ex-RCAF veteran pilot named Lynn Garrison, as well as two local Biafran pilots.  Together, these men would fly the planes in combat.  In doing so, they would face a vastly superior Soviet-armed Nigerian air force.

On May 22, 1969, von Rosen’s attack planes launched their first mission.  He called his planes, “the Biafran Babies” after the children who were dying from the Nigerian government’s indiscriminate bombings.  His BAF aircraft achieved complete tactical surprise, ambushing the Nigerian fighter jets on the ground.  In that mission and the many that would follow over the next three months, they would destroy four MiG-17s, a Heron, two Canberras and three Il-28s (half of Nigeria’s bomber fleet).  All were caught on the ground at the NAF bases in Port Harcourt, Enugu, Benin City and Ughelli.

He would lead the missions in total radio silence, attacking at either dusk or dawn so as to minimize the risk from anti-aircraft fire.  Against larger targets, all of the aircraft flew together — against small targets, they would attack in pairs.  During this time, they also rocketed and destroyed an airport control tower.  The little “Baifran Babies” were frequently fired upon by anti-aircraft artillery, but rarely hit, given their smart, surprise hit-and-run tactics.

Nonetheless, after a few months, the Nigerian Air Force was able to reequip with more Soviet aircraft.  Further, in retaliation, a Nigerian Air Force MiG-17 attacked and shot down a Swedish DC-7 that was flying an aid mission on behalf of the Red Cross.  Four of its crew were killed.  By July, seeing the futility in fighting what was developing into a much stronger, Soviet-backed air force, von Rosen departed for Sweden.  Nonetheless, as news of other atrocities emerged, he returned in August in an attempt to train a follow-on group of local Biafran pilots to carry forward.

In September of 1969, five North American T-6Gs were acquired for the new BAF and of these, four successfully arrived in Biafra, landing in October 1969.  For the next three months, these aircraft flew missions in the hands of a group of Portuguese ex-military pilots.  By January 1970, however, the mission ended as the Biafran conflict wound up in a bloody conclusion.

More Refugee Operations and the Death of von Rosen

Five years later, in 1974, Count von Rosen once again took an activist role when he returned to Ethiopia to help fly aid to a starving population.  At the time, he was also flying commercially for Transair.  He left that job and brought down a single-engine MFI-17 Supporter to Ethiopia, in which he intended to fly missions.  In 1977, he returned yet again at the outbreak of the Ogaden War, which pitted Ethiopia against Somalia.  Once again he flew relief missions for refugees.

While on one such mission, on July 13, 1977, he was caught on the ground when a force of Somali guerrillas suddenly attacked at Gode.  Sadly, he was killed in the ensuing battle.  The body of Count Carl von Rosen was buried in Addis Ababa at the Gulale Cemetery, where it remains to this day, testimony to his love of the Ethiopian people.

Some of the traditions of Count von Rosen’s activism lives on in Lynn Garrison, one of the original pilots from the Biafran Air Force.  A Canadian, Garrison was the youngest pilot commissioned in RCAF history (at just 17 years of age) and later became an active intelligence operative with the CIA.  Over the years, he flew a wide range of mercenary operations and special missions, earning his covert call sign, “The Shadow.”  Garrison was also active in politics, relief and reforestation operations in Haiti.  He is known as a polarizing figure and well-documented CIA-backed mercenary.  From the 1960s to 1980s, he was an active warbird pilot and became involved in a number of films, gathering together aircraft and reproductions for aerial scenes.  Among the movies with which he was involved were Tora, Tora, Tora, Von Richthofen and Brown, and the 1966 classic, The Blue Max, as well as numerous others.  Finally, he is the author of two books — Voodoo Politics : The Clinton/Gore Destruction of Haiti (Oct 2000) and Aristide: The Death of a Nation (June 2004).

Ever confident in his abilities as pilot, Garrison once said, “If it has fuel and noise, I can fly it.”  Such were the men who flew with the late Count von Rosen.


I just checked up on some info regarding C.G. von Rosen after his time as a pilot in the Winter War in Finland. According to an article, written for The Swedish National Archive by Jan Forsgren, he went to work for ABA (AB Aerotransport) in Sweden when The Netherlands were occupied by Germany in 1940. He sometimes flew between Stockholm and Berlin during that time and according to a report by the US Embassy in Stockholm in 1945 he also met with Göring. The article does not mention von Rosen flying for the KLM or between London and Lissabon at all after 1940. According to Forsgren, von Rosen witnessed the destroyed Jewish ghettos of Warsaw towards the end of the war and this is supposed to have affected him profoundly. After that he became very much involved in humanitarian missions.


Good morning:
My Father and I are working on a book, outlining some of his flight experiences. He and Count Von Rosen flew in Congo, for Babies for Biafra. We are interested in talking about the original photo files, to be included in our book. Thanks for the time. His name is Lynn Garrison, and there is a wikipedia page on him as well, for your research.

I’m presently writing about Count Von Rosen and am interested in corresponding with you about your father’s work with Von Rosen.


In Tony Byrnes book, Airlift to Biafra, the first flight by Baron Von Rosen over marshes at treetop height is well described. His guide was Fr Bill Butler, the man who baptized me. His decision to set up the Biafran Air Force and leave the humanitarian effort is well described.


I’m a Biafran. We can never forget the help Count von Rosen offered us during the three years of war with Nigeria. We’ll always remember him for the great human being he was.