On paper, the idea seems simple enough — just put wings on tanks so that they become a tank-gliders, then tow a fleet of them into the air, fly deep into the enemy’s vulnerable rear area, cut them loose, and their crews can glide them down to land, ready for battle.  Although seemingly laughable on first look, the flying tank solves a major problem in airborne warfare by providing heavy weapons and armored support to airborne troops.  It offers a means to deploy heavy combat units unexpectedly and quickly where the enemy least expects it.  It is no surprise therefore that four major nations engaged in flying tank research during the 1930s and 1940s, including the Soviet Union, the USA, Japan and England.  Of those, only the Soviets would bring prototypes to the flying stage — and they did it four times with four separate vehicles.  Today in history on September 2, 1942, marks the 70th anniversary of the first and only flight of the Soviet Union’s Antonov A-40 Krylya Tanka, the most ambitious of the designs and the world’s only true flying tank. 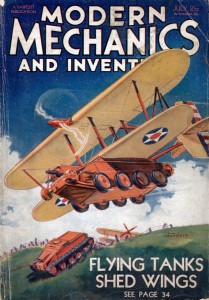 The flying tank was originally proposed by an American engineer named John Walter Christie.  Although he developed a working example of the lightweight tank vehicle, it never flew.  The key problem facing designers is that tanks are in many ways the very opposite of airplanes.  Where an airplane has to be lightweight, a tank has to be heavy.  Where an airplane must be streamlined, a tank is typically the least aerodynamic shape imaginable.  Nonetheless, for every engineering challenge, one can find an engineering solution.  However, tank engineers are quite a different lot than aeronautical engineers.  They come with completely different training, knowledge and talents.  Merging the two engineering disciplines together proved difficult. 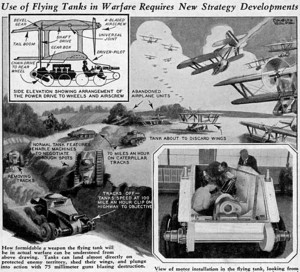 Christie developed and built a four ton tank that could be mated with a pair of wings.  The idea was simple — the tank would use its own power and wheels (the tracks were removable) to accelerate down the runway to about 55 mph, then the tank engine would be switched to power a propeller, accelerating the tank to a speed of 85 mph, whereupon it would take off.  Engineering problems confounded the project and the War Department abandoned the project when Christie offered to sell his designs to the Soviet Union.

The Japanese developed a flying tank too, known as the Special No. 3 Tank (Kuro), though it never flew.  In Britain, Saunders-Roe created the P.1033 tank landing module, which mated a light tank to a wing that featured four engines and a twin tail.  Ultimately, the USA, Japan and England would abandon flying tanks due to technical difficulties.

Only the Soviet Union would persist — and actually fly. 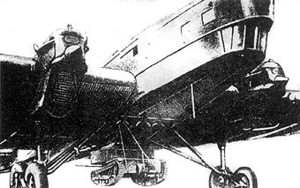 A T-27 suspended beneath a TB-3 Heavy Bomber.

The Soviet Union’s first effort at developing a flying tank involved the T-27 Tankette in the early 1930s.  A tankette is, as the name implies, a very lightweight diminutive tank and the T-27 was light vehicle with extremely narrow tracks and a 7.62 mm DT machine gun mounted on the chassis.  In the early 1930s, the Red Army deployed 65 battalions with 23 tankettes each.  The T-27 was also designed for airborne delivery, slung under the mid-point of the fuselage of the Tupolev TB-3 Tyazholy Bombardirovschik (Heavy Bomber).  With the obsolescence of the T-27, the Soviets developed flying versions of the T-37 and T-38 tankettes.  The latter actually flew in fairly large numbers under a fleet of TB-3s in the Kiev exercises in 1936.

Nonetheless, the Flying Tankettes fell short of the promise of a true flying tank.  First, the tankettes were too light and as a result, by the onset of World War II, they were hopelessly outclassed by German armored vehicles.  Second, the flying tankettes weren’t airdropped, but rather suspended beneath the TB-3s for flight and then unloaded after landing.  This was akin to transporting them as external cargo loads on a regular transport plane — in other words, they were not true flying tanks.  They still needed to be delivered to airfields and in battle, that would be a great limitation.  Third, the tankettes and their crews were delivered separately to the battlefield, requiring time to join up before combat.  Despite these shortcomings, the Flying Tankettes did apparently make an operational debut.  It appears that when the Romanians evacuated Bessarabia (now the Republic of Moldova) in 1940, the Soviets may have air dropped (from a few meters of altitude) a few of the Flying Tankettes as they sought to rapidly occupy the countryside. 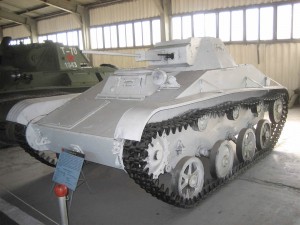 Soviet planners wanted more capabilities than the Flying Tankettes offered.  They turned to Antonov ASTC, one of the most famous Russian aeronautical design bureaus.  Oleg Antonov, the company’s senior designer, soon provided the design for the Antonov A-40 Krylya Tanka (literally, “wings for tank”).  In 1942, Antonov was successful in mating a pair of large glider biplane wings to an “off-the-shelf” proven T-60 tank.  The only modification to the tank was to slightly lighten it.  Antonov’s concept was that the crew would fly the tank to a landing, discard the wings and then immediately charge into battle.

The designers had every confidence that once airborne the tank would fly well, but getting it airborne would be difficult.  A very powerful glider tug would be required to haul the A-40 into the sky.  Oleg Antonov relied on the same four-engine heavy bomber, the TB-3, that had been used with the Flying Tankettes. 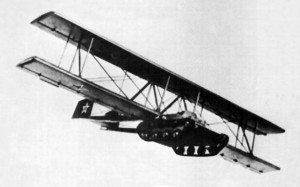 The A-40/T-60 combination, in illustration, probably from the Antonov company.

On September 2, 1942, exactly 70 years ago today in aviation history, the A-40 Krylya Tanka was mated to a T-60 for a test flight at Zhukovsky Airfield near Moscow.  The tank was the stock T-60 that had been lightened for the test.  To help further reduce weight, the tank carried no ammunition and only limited fuel.  The A-40/T-60 was hooked to a tow line and connected to a TB-3 Heavy Bomber.  Inside the tank, one of the Soviet Union’s most expert glider pilots, Sergei Anokhin, was strapped in.  He was ready to fly.

There were problems right from the start.  The TB-3 bomber serving as the glider tug started up.  It rolled down the runway and hauled the A-40/T-60 into the sky.  Everything seemed promising at first, but as it climbed into the sky for altitude, the drag and weight of the flying tank proved to be too much for the TB-3.  The bomber crew had to drop the tow line to avoid a crash.  Instead of cutting loose at a higher altitude, as originally planned, the A-40/T-60 was too low to prove the concept and in danger of crashing.

Rare front view of the A-40/T-60 prior to flight testing.

Once cut loose, however, Sergei Anokhin proved his expertise.  He gently curved away from the TB-3 and lined up for an immediate landing.  In the short time he was aloft, he found the A-40/T-60 flew smoothly and well.  He touched down lightly with no damage to the tank.  Once on the ground, he dropped the wings, started the tank engine and drove back to the base to file his flight test reports.  From his perspective, everything had worked perfectly.

The problem was that the Soviet Union lacked a powerful enough aircraft to tow the tank into the air and to the battlefield.  Without a suitable plane on the drawing board, much less even remotely foreseen, the project was shelved.  For one brief shining moment, the A-40 Krylya Tanka had flown.

The British did came up with a better alternative to the Flying Tank for the invasion of France on June 6, 1944, with the General Aircraft Hamilcar GAL.49 glider.  Inside each Hamilcar, a variety of heavy vehicles or weapons could be carried, including the Light Tank Mk VII Tetrarch.  In the hours leading up to D-Day, thirty of the Hamilcars were employed with British airborne forces as part of Operation Tonga to land in the fields of Normandy.  Of those, twenty carried Tetrarch tanks.  En route, one crashed into the English Channel when the tank unseated from its tie-downs.  Two more collided while orbiting to land in the nighttime skies over Normandy, destroying both.  The remainder touched down successfully, but then one was overturned when another Hamilcar hit it on landing.  The problems with the design continued to dog the tank crews when they were immobilized, their tracks entangled in the many discarded parachute shrouds that littered the landing fields.  Once clear, however, the remaining tanks provided much needed infantry support, though they were no match for the heavier German tanks encountered.  Just three survived the first two months of combat.

What became of the world’s only flying tank pilot, Sergei Anokhin, after his flight in the A-40/T-60?

Trained in gliders at Koktebele in 1930, then Osoaviakhim powered flight school in 1932. Service in the Second World War, followed by test pilot work at the Gromov LII from 1941-1964. Renowned for pioneering test flights, including the ‘flying tank’. Head test pilot for the MiG-15 and MiG-17. Involved with flight by remote control of unmanned Lavochkin supersonic drones and missiles. Pioneered weightless flights on Tu-104. Worked at the Korolev design bureau as a test pilot and as an instructor for civilian cosmonauts. Injured in the crash of a Tu-16 being flown weightless to test restart problems with Molniya Block L upper stage. Left out of consideration for cosmonaut service due to medical problems after the crash. Recipient of numerous state medals.