In the late 1920s, Fritz von Opel, the grandson of Adam Opel and the founder of the famous German car manufacturer Opel, had a dream.  While others in his family were focused on automobiles, Fritz had a penchant for rockets.  As experiments, he had mounted rockets on the back of two racing car designs.  This proved to be excellent publicity stunts and helped expand the family car company’s reputation and business.  Yet Fritz von Opel was unsatisfied.

Interested in the growing public interest in rocketry, much of the result of articles by the popular rocket designer, Max Valier, he surmised that a rocket-powered glider would be a reasonable venture for the Opel company. Thus, he teamed with rocket pioneers Friedrich Sander and Max Valier.

Knowing little about aircraft design, Opel paid a visit to Germany’s premiere gliding spot, Wasserkuppe, to search out a reasonable glider design onto which he could fit the rocket pyrotechnic package.  The trip was the beginning of the world’s first rocket aircraft design.  The efforts of Opel, Sanders, and Valier would result in successful flight, two crashes with one plane burned to ash, and finally Opel’s own famous flight of a rocket-powered glider on September 30, 1928 — on today’s date in aviation history. 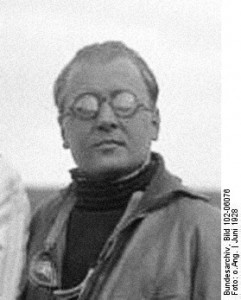 With the first trip to Wasserkuppe, Opel, Sander and Valier came upon the Ente (“Duck”), a canard-design by Alexander Lippisch.  Tailless, the glider had its elevators at the front the fuselage and the wing at the back of the fuselage.  The design would allow the rockets to be mounted at the back of the plane without risk of creating a fire from the heat and flames they produced.  The rocket glider would rely on propulsion technologies that Sander and Valier were working on in the Verein für Raumschiffahrt (VfR), a German rocketry and space association (one promising member was then 19-year old Wernher von Braun). 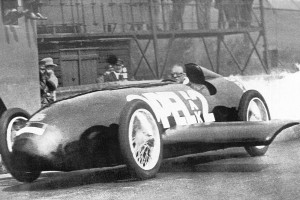 The Opel RAK 2 rocket car racing at the famous German speed track AVUS in 1928.  To keep the car from lifting, downward canted wings were fitted to the sides in what is likely the first use of “down force” in auto racing.  With 24 rockets, the car attained 230 km/h (143 mph).

Opel purchased the Ente and went to work with the engineers and with Lippisch to mount the rockets and work out balance issues.   Two rockets packed with black powder were created, each of which could be fired by an electrical switch mounted in the cockpit.  Each rocket would provide 30 seconds of burn.  They were designed to be fired sequentially.

The first critical issue the designers faced was that the weight of the rockets changed as they burned out.  This resulted in the center of gravity or balance point shifting forward as each of the rockets were fired.  Using the concept of a lever arm, the team mounted a movable counterweight under the cockpit floor.  Thus, as the rockets fired, the pilot could move the weight backward within the fuselage, thus keeping the balance point within a range that would allow stable flight.  A launch rail with large sized rubber bands would help get the glider up to flight speed.  Overall, the rocket-powered glider design was an ingenious concept and design.

Lippisch’s own long-time test pilot, Fritz Stamer, was hired to fly his Ente rocket glider, even if Max Valier, the very man who had promoted rocketry in the first place and had ignited Opel’s dream, was a pilot.  On June 11, 1928, after a first trial in which the ignition had failed, Stamer threw the first switch and ignited the Ente’s first rocket.  For 30 seconds it burned as Stamer lifted off and accelerated straight ahead.  He flew 1,500 meters perfectly, orbiting once around the Wasserkuppe landing strip.  He then set down perfectly and climbed out.  This was the first successful flight of a rocket plane.

Fritz von Opel was overjoyed and wanted to fly it himself, but there was still one more test to perform — to both rockets together at once.  This would accelerate the craft more rapidly, adding to the danger of the venture.  The rockets were prepared for a second flight while Opel and the others looked on.

The second flight didn’t go as planned.  When Stamer threw the switches, one rocket fired perfectly.  However, the second rocket exploded.  The glider was fatally holed from shrapnel, yet with the first rocket still burning and no means to cut thrust, the Ente took off and accelerated, its rear fuselage in tatters and the wing partly shredded.  Worse yet, a fire was rapidly developing at the back of the fuselage even as the first rocket continued to push the Ente forward.

Stamer rode the flaming Ente until the rocket exhausted its fuel and then crash landed the Ente into the field.  Uninjured, he tumbled out of the burning wreckage.  He was able to stagger clear before the flames spread to consume the rest of the glider.  The Ente was a complete loss.

The Opel RAK 1 on its 20 meter long launch rail prior to take off.

Undeterred, Fritz von Opel decided to purchase another glider tomodify for rocket power.  Larger rockets would be used, however.  The new aircraft would be a more traditional glider configuration designed specifically for the venture.  The design work was given to Julius Hatry, a close friend of Lippisch’s who had recently designed and built Germany’s largest glider.

The design that resulted was innovative.  To keep the tail free of the rocket burn, Julius Hatry elected to raise the control surfaces on booms above the back of the wing.  To avoid changes in balance, a pod-like fuselage would be slung under the wing — at the back of this, 16 smaller rocket motors would be placed at the center of gravity in a tight square of 4 rows of 4 rockets each.  This way, the CG would not shift forward or backward during flight as each rocket was fired.  As with the Ente, a launch ramp — this one measuring 20 meters — was fitted with rubber bands that would accelerate the rocket glider at first, helping it to achieve flight velocity.  The aircraft was christened the Opel RAK 1 and it was the world’s first purpose-built rocket plane. 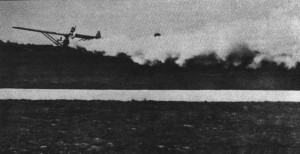 The Opel RAK 1 takes off at Rebstock Airfield, Frankfurt-am-Main on September 30, 1929.

This time, rather than flying the plane with a test pilot, Fritz von Opel elected to take the first test flight himself.  The flight was moved to Rebstock Airport, located near Frankfurt-am-Main.  As crowd gathered, Fritz von Opel climbed into his Opel RAK 1 glider.  After a final check, he was ready for flight.

Eight men drew the plane back on the launch rail and then released it.  The rubber bands propelled the glider forward.  Simultaneously, Opel flipped the switch and ignited his first rocket.  The RAK 1 left the launch ramp, but wasn’t yet airborne. It bounced down the field, spitting flames and smoke as it accelerated and then, finally having attained a sufficient airspeed, it lifted off.  For 75 seconds, Opel flew the glider as the rockets pushed him ahead.  He covered a total distance of just short of a mile.  Without any additional available thrust, all rockets exhausted, Opel piloted the plane down for a landing.  He hit hard, causing moderate damage to the glider, but it was a success.  It would thus be the one and only flight that day. 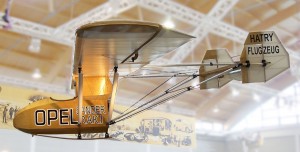 A model of the Opel RAK 1. Photo Credit: Bergfalke2

Fritz von Opel would invest in a second glider rocket plane, but never brought it to conclusion.  His rocket ventures, both automotive and aerodynamic, earned him the nickname of “Rocket Fritz”.  Caught up in the advances of automotive technologies, he elected to instead focus his energies on that business in his particular role, which involved marketing.

All of the rocket cars and rocket gliders that he had developed ahd earned the company a lot of publicity, positioning it to market its cars to the general public.  Today, Opel remains today as one of Germany’s leading car producers.

Along the way, the company would produce a number of innovative cars, perhaps none more impressive than the 1970s era Opel GT — which some called a mini-Corvette.  No doubt, it was one of the most beautiful cars ever designed and fun to drive.  I wonder if rockets could be fitted on the back of an Opel GT?

Fritz von Opel’s famous flight was filmed and is available for viewing:

Many car manufacturers had their roots in aviation or ties to aircraft design.  Among the best known then and now are BMW (the logo is actually a stylized white propeller spinning against a blue sky), Mitsubishi (can you guess what the shape of the logo is supposed to be?), Mercedes, Salmson (a once great French car company that had specialized in aircraft engines) and even Ford in America with its famous Trimotor airliner design that popularized commercial airline travel in America.

Can you name three other early automobile companies that had ties to aviation?