Orphaned at age 17, he took over the family’s mid-sized business.  Relying on a patented technology for oil drilling bits, his company was hugely successful despite the grim years of the Great Depression.  Yet he dreamed of a different life — one of glamor where he played the central role as a record-setting pilot and famous Hollywood producer.  Thus, in the late 1920s, he risked his fortune and moved to Los Angeles.  His first two films were financial successes, empowering him to pursue his goal of flight through the merger of his two dreams into one with the filming of the movie, “Hell’s Angels”.  In 1932, he founded an aircraft company and rented space in the corner of Lockheed’s hangar at Burbank.  There, he engaged a hand-picked team of aeronautical engineers and designers, telling them that money was no object.  He gave them just one goal — to build him the fastest land airplane in the world.  In the meantime, he set out to learn to fly.  This is the unlikely story of Howard Hughes and his H-1 Racer. 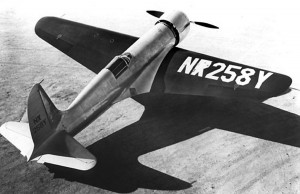 The engineers went to work on a design studies.  By 1934, they had a winning formula which was rendered into a two foot long wind tunnel model.  This was taken to Caltech’s wind tunnel and, after an intensive series of evaluations, was determined to have a potential top speed of 365 mph.  For Hughes, this was enough and he ordered that his H-1 Racer be built without delay.  This would be his steed for a world record land plane flight.

Taking the plane from a model to a working full-size aircraft would take more than another year, yet the Hughes engineers delivered a masterpiece of aeronautical engineering and a one-of-a-kind speed plane.  To achieve his dream (and their own), they packed new innovations into the H-1 Racer.  The wings were thin and the the structure involved a revolutionary cantilever design.  Retractable landing gear were fitted — a new innovation that they copied from the Monomail.  To ensure the same polished and smooth form as the wind tunnel model, the plane’s hand-shaped aluminum skin featured a new innovation called flush rivets.  These reduced drag by improving airflow at the boundary layer as no rivet heads protruded above the surface line of the wing.  The virtually unlimited budget applied to the project had its desired effect — to ensure the best result, each rivet was individually crafted for the plane and its specific location on the skin — the skin was so smooth that you could pass your hand over it and never feel a single bump. 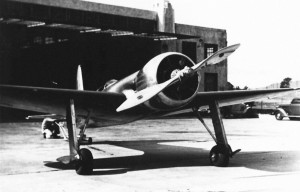 The engine was nestled in a tightly designed cowling that allowed the aircraft to cut more cleanly through the air.  The design was about speed and, rather than using a hugely powerful engine bolted to the front, the H-1 instead relied on aerodynamic form — in a word, streamlining — to press the limits of just how fast an aircraft could go.  Nonetheless, since power is paramount for speed, at the front, the 700 hp Pratt & Whitney R-1535 radial engine was tuned to produce an astonishing 1,000 hp.

By the late summer of 1935, the Hughes H-1 Racer was being built in the hangar at Burbank.  Finally, on September 13, 1935 — today in aviation history — the plane was ready for its first flight.  All of the systems were checked out and carefully ground tested by the engineering and design team.  The plane looked brilliantly fast — its wing painted a medium blue and the fuselage shined to a mirror polish of bare metal. It looked to be going 300 mph just sitting still on the ground. 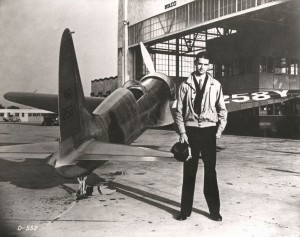 Howard Hughes himself climbed aboard and simply pushed the throttle forward to take off.  Once aloft, satisfied with the performance and handling of the plane, he proceeded to immediately undertake a series of timed speed runs on a course that he had specially laid out for the record attempt, wasting no time in his pursuit of his ultimate goal.  Serving as his own test pilot, Hughes simply made his speed runs over the course at Martin Field, a small airport near Santa Ana, California.  His goal was within the design specifications of the aircraft — the existing record was 314 mph (at the time, speed planes in the Schneider Cup races were already faster than any land plane). 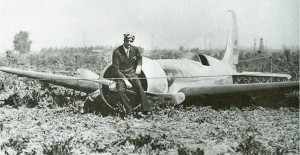 Ahead was a farmer’s field planted with beets.  It would have to do.  Hughes gently nursed the high speed glider downward and crash landed into the field.  Damage was slight but enough to ground the plane.  Hughes climbed out of the cockpit and, when his team drove over to assist, he greeted them with the words, “We can fix her, she’ll go faster.”

While his H-1 Racer was being repaired, he decided to set another record, this time going after Roscoe Turner’s transcontinental speed mark.  To ensure success, he met with the famous woman speed racer, Jackie Cochran and asked to purchase her Northrop Gamma.  She refused, replying that she needed the plane for the Bendix Trophy Races.  While Hughes found that he could not convince her with his charm, he also discovered that as a millionaire, he could convince her with his money.  He made ever increasing offers until finally she sold him her plane.  After modifications, in January 1936, he flew a new transcontinental speed record of 9 hours, 27 minutes — just 36 minutes faster than Roscoe Turner. 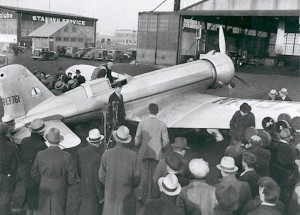 For Hughes, beating the previous record by such a small margin was decidedly unsatisfying.  He felt that he had to smash the record completely, setting a mark that would stand unchallenged for years to come.  Thus, he ordered his team at Burbank to refit the H-1 Racer away from its original design goal of short speed dashes and instead reconfigure it for long distance flights.  His team delivered the goods.  With new wing and larger fuel tanks, the plane was unbelievably fast.

A year later, on January 18, 1937, his newest iteration of the Hughes H-1 was ready.  Again, with minimal test flying and absolute trust in both his engineers and his own flying skill, Howard Hughes took off on his cross-country speed run between Los Angeles and New York City.  The plane performed perfectly and and he averaged 322 mph across the entire country.  When the stopwatch clicked, he had shattered his own prior record in the Northrop Gamma by just one second shy of two hours — the H-1 Racer would complete the flight in a record 7 hours and 28 minutes. 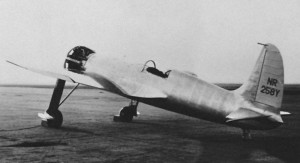 Based on his extraordinary record, Hughes was awarded the Harmon International Trophy, an annual selection that highlighted the world’s most outstanding aviator of each year.  Finally, Howard Hughes felt he had been crowned the ultimate title.  He would retire from flying the H-1 and move on to other projects, over the years building the Hughes Aircraft Company into one of the greatest aviation companies in the world.  Even to this day, the legacy of Howard Hughes stands as one of the all-time greatest innovators in aviation history.

Howard Hughes attempted to interest the US Army Air Corps in his H-1 Racer design in the two years prior to World War II.  He proposed that with modifications, the design could be converted into one of the world’s fastest and most deadly fighter planes.  Indeed, the plane had all the hallmarks of a winning formula.  The cockpit, set back on the fuselage, offered excellent visibility.  The flush rivets and streamlined form were wicked fast.  The plane was small and sturdily built, making it a hard target to shoot down.  It was maneuverable and featured retractable landing gear.  It also had sufficient fuel for long range operations.  The Army, however, rejected the design due their unfamiliarity with its revolutionary cantilever structure.  In the years to come, the Army would regret the decision, though many of the design features of the H-1 would be incorporated into the generation of fighters that would go on to help win the war, including the P-47 Thunderbolt and the P-51 Mustang.

Who was the most famous aviator to fly in the small band of movie stunt pilots for Howard Hughes in the filming of “Hell’s Angels”?