In the poor visibility, they had missed Komsomolsk-on-Amur.  After flying eastward for 26 hours and covering more than 3,600 miles, they had navigated without landmarks since the Ural Mountains.  Marina Raskova was a highly skilled navigator, but it didn’t matter — she had nothing to go by.  Descending through the clouds, they realized they were beyond land and over the Sea of Okhotsk — ahead was empty water.  Valentina Grizodubova, the mission commander, gave the order to head back west as the low fuel warning light began to flash incessantly.  Her copilot, Polina Osipenko, turned the aircraft around.  Just 30 minutes of fuel remained in the tanks.

Lost and unable to find an airfield, they would have to crash land.  Dryly, the three women weighed the options.  Isolated in the nose and encased in a bubble of glass, it would undoubtedly be fatal for Raskova, the navigator — or she could bail out into the uncertain terrain below.  What had begun as a high profile Soviet state-sponsored record flight by an all-woman crew was rapidly heading toward a disastrous ending.

The Soviet Premier, Joseph Stalin, had given clear orders.  Soviet pilots would connect Moscow with the farther corners of the Soviet Union.  At the end of June, the CDB-30 “Moscow” aircraft had flown non-stop flight from Moscow to Spassk-Far, in the Primorsky Krai, in the Far East.  It was a distance of 6,850 miles, and the pilot, V. K. Kokkinaki, and his navigator, A. M. Bryandinskogo, were declared heroes.  After that success, which had been carried by the Soviet Union’s official press agencies for days, Stalin had ordered that the Soviet Union’s women were to make a similar trip.  The three best and most experienced were chosen and they were given a specially-built aircraft, a modified Tupolev DB-2B called the ANT-37 “Rodina”, which means “Motherland” in Russian (a fitting name for an all-woman crew.  Like the men’s flight, it was a serious state-sponsored mission.

The commander selected by Stalin was Valentina Grizodubova, one of the Soviet Union’s very first woman pilots and the daughter of aircraft designer Vasil’yevich Grizodubova.  She had been flying since age 14 and had amassed a total of 5,000 hours in the air.  The perfect Soviet model citizen, she was also a concert pianist and a member of the Soviet paramilitary organization called Osoviakhim.  Her copilot, Polina Osipenko, was the daughter of a Ukrainian farmer.  Osipenko had had to fight to get the right to fly, finally soloing in 1933.  Due to hard work and long hours training and flying, by 1937, she had emerged as a celebrated Soviet aviatrix with three records, two for altitude and one for distance on a closed circuit.  Their navigator, Marina Raskova, had been the Soviet Air Force’s first woman navigator and was also a trained singer and musician.  Quietly, she also worked for the NKVD, the Soviet secret police.  They were the perfect, hand-selected flight crew for the mission.

They had taken off on September 24, 1938 — today in aviation history! — and had flown a full day and through the night.  The clouds and turbulence had forced them to fly at higher altitudes than planned.  Finally, they had located the shores of the Sea of Okhotsk.  Having turned around and come back over land, they found nothing but forests and swamps.  Nothing on their meager charts matched any landmarks they could find, but Raskova had managed still to locate their rough position.  Radio navigation aids were non-existent and they had no fuel to fly a box search pattern to find a town or village, let alone anything of interest.  Their radios were knocked out from the night before when the cabin temperatures had fallen to -35 degrees C.  Time was running out.

At 6,500 feet, Grizodubova ordered Raskova to bail out.  She would have to descend into the forests and then find her way to the crash site on foot.  Raskova donned her parachute, opened the emergency hatch and leaped out into the air.  Cleared of the aircraft, she pulled the ripcord and slowly descended into the trees.  After a safe landing, itself something of a miracle, she realized that she had left her emergency kit and supplies on the aircraft.  She didn’t even have a compass.  There was nothing to do but set out in the direction she had last seen the plane, as it disappeared into the distance.

Grizodubova and Osipenko descended slowly and searched for a reasonable landing spot.  They only found a swampy area — it would have to do and was better than crashing into the trees.  Carefully, they lined up and Grizodubova left the landing gear up to avoid a catastrophic crash.  They set down into the half-frozen muck so perfectly that the “Rodina” was damaged but the two climbed out without injury.  All they knew was that they had come down somewhere in the Far Eastern reaches of Siberia.  They would have to hope that ground or air search teams would find them.  To help ensure that, they elected to remain with the plane.  The swampy area in which they had landed was taiga at the head of the Amgun River.

Wandering the forests alone, Marina Raskova was unable to find the plane for fully 10 days.  She somehow survived, despite having no water and only two chocolate bars for food.  She found the plane just two days after a Soviet search aircraft had located the wreckage and a ground rescue team had been dispatched from the nearby village of Kirby.  The team and other two pilots had waited by the wrecked plane for her, hoping that she would eventually emerge from the forests.  The three were brought to Kirby and then taken back to Moscow.

As it happened, the “Rodina” had flown 3,672 miles in 26 hours and 29 minutes, a new record for an all-woman flight crew.  All three pilots would be celebrated as Heroes of the Soviet Union (the first time any women had been so honored and the only ones to receive that award prior to World War II).  Additionally, each received a reward of 25,000 rubles for their loyal service to the Soviet ideal.

Conveniently, the Soviet high command would ignore the crash landing at the end — ah, the glories of the state-owned press — and the propaganda campaign would proceed as scheduled.  Among the other honors, each was honored with a postage stamp of their own. As well, a book entitled, “The Heroic Flight of the Rodina” was authored and rushed to press by Lazar Brontman and Lev Khvat in the three months remaining of the year, 1938.

A year later, Polina Osipenko would die in an accidental crash — the village of Kirby and surrounding district was renamed in her honor, a name it retains to this day.  Raskova would go on to form the famous all-women night attack regiments, the Night Witches.  She would die in operations during the war against Nazi Germany.  Only Grizodubova would survive the war — in 1993, she would pass away at 83 years old in Moscow, having seen the flag go down on the Soviet Union and the end of Stalin’s dream of Soviet socialism. 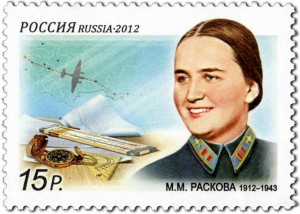 In 2012, Raskova would be once again honored on a Russian postage stamp, highlighting her flight, her navigational equipment and a portrait done in proper Soviet style — a mirror image of an original Stalinist portrait photo.

Despite the outward press focus of equality between men and women in the Soviet Union, the truth was quite different.  All three of these women had to fight tooth and nail to have the same opportunities to fly as the men pilots, who offhandedly dismissed the Soviet women as being of lesser ability.  It was only Marina Raskova’s status as a Hero of the Soviet Union that gave her the clout needed to found the “Night Witches” who would go on to fly outdated biplane equipment, typically the Polikarpov Po-2, at night against the German army in the Russian heartland.  The Night Witches had just 40 flight crews (two women on each crew) and yet were one of the highest decorated units in the entire war.  At the end of the conflict in 1945, most had flown over 1,000 missions each.  Of the women in the unit, 30 would be killed in combat and 23 would receive the high honor of the Hero of the Soviet Union medal.

How did Marina Raskova die?

2 thoughts on “The Rodina”