One hundred years ago today, on October 5, 1912, Flight, the “First Aero Weekly in the World” published its its Issue No. 197 (No. 40, Vol. VI).  The banner declared that it was “A Journal devoted to the Interests, Practice, and Progress of Aerial Locomotion and Transport” and also reminded readers that Flight was the “Official Organ of the Royal Aero Club of the United Kingdom.”  The stories of the day are interesting, giving us a glimpse into the past through photos, bulletins and articles from those early, pioneering days of aviation.  This is our first in a series of excerpts from Flight, celebrating aviation from a century ago.

To help place this in perspective, we bring you some of these stories through eyes of Charles Davenport (in a story of our own invention)….

“Yes, Geoffrey, could you bring me tea here in the library.  Ah, I see we have the post from Flight.”  Charles Davenport nodded as Geoffrey backed swiftly from the room — such excellent staff were hard to find these days.  Without pause, he turned to read the first pages of the Aero Newsletter, which had just come to London via the daily courier who served the House on important matters.  He looked up the news about the military meet from last week at Hendon.  Sadly, he had been unable to attend.

High gusty winds and mist were responsible for the abandonment of flying at the Naval and Military flying meeting on Saturday.

There was nothing doing for most of the afternoon until Lieut. Parke took out the new G.-W. machine, and made several straights across the ground against the wind.  Before and after there was a good deal of galloping around with gun carriages on the part of the military present, and Hamel got away on his own 50-h.p. Blériot, the engine of which was in anything but good tune; once or twice he swooped down almost unpleasantly close to the spectators in the half-crown enclosure, a large number of whom got severe attacks of “cold feet.”

On landing, Mr. Hamel was fortunate enough to have Mr. Hall’s Blériot No. 38 placed at his disposal, so he proceeded to climb for altitude, the prevailing grey mist giving a weird effect of loneliness to the little machine away ever so high up in the air.

During Hamel’s flight, Lieut. Spencer-Grey made several attempts at flight on an Anzani-Deperdussin, but was unable to get it to rise owing to engine trouble. 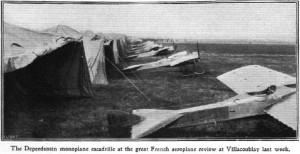 Sad thing that, he thought, perhaps it was a good bit of luck to have been detained by Emily Smythe-Davis instead Saturday.  In any case, a day with Emily was welcome, even in the cloudy autumn.  Flipping back to the front section, he ignored the editorial except to notice in passing that it was something about France and its greater progress in the air compared to Britain.  Well, right then — we’ll see about that.  Charles focused himself instead on the first story about India….

To India by Air.

So far from the project for a flight from London to India, to which reference was made in our editorial columns earlier in the year, having been dropped, it is now announced that an attempt to carry it out will probably be made before the end of the year.  Several native Indian princes are taking a very active interest in the arrangements, and by way of showing their practical sympathy in the scheme have promised substantial money prizes.  With the able co-operation of the Royal Geographical Society, the route has been mapped out, and from the particulars given on page 898 it will be seen that it is almost direct from London to Karachi.  The question of supplies has been thoroughly gone into, and it is proposed that the daily stages should be of 400 miles, so that twelve days would be required for the trip.  All that apparently remains, therefore, is to select the most favourable time for the attempt.  So far as we are able to see, there are no practical difficulties in the way of success, and from the point of view that it would afford a far-reaching and widely understood demonstration of the perfection to which the aeroplane has attained, the project has our heartiest sympathy.

This would be certainly something to look into.  He thought about it for a moment.  Linking Britain to India in just twelve days, an impossibly fast journey that could be done, perhaps, by aeroplane even this year?  The Davenports had holdings in the Punjab after all.  As tea arrived, he decided to read a few entries from his favorite sections that highlighted the news from around the world….

EXPERIMENTS are being made in Germany with the object of finding a material for covering planes which will suffer as little as possible from rifle fire.  Some test have been made with planes which a layer of wire gauze has been placed between the layers of fabric, but the weight of this arrangement is a serious disadvantage.  Another idea is to abandon the use of fabric and to utilize a very fine wire gauze in which the interstices are filled with varnish, a system, no doubt it will be remembered, advocated in FLIGHT some years ago by Mr. Crosland Taylor.

It always seemed that the Germans were keen to copy British inventions, he considered.  Well, no matter.  There are more stories here about the French as well….

And Some More Borels.

Capt. Destouches, on the 26th ult., was at Buc, and witnessed tests with one single-seated and a couple of two-seated Borel monoplanes for the army.  Chambenois and Chemet went up on the two-seaters, 500 metres in 5 mins.

The Tragic Death of Chas. Voisin.

By the fatal motor car accident which overtook Charles Voisin, one of the Voisin Frères, the world has lost another pioneer.  He was the business man of the famous firm, his brother Gabriel devoting himself to the designing and construction side; but Charles Voisin left the firm something over a year ago, and for some months he managed a tour with Audemars, Barrier and Garros in America.

He was returning from St. Etienne, and when at Belleville-sur-Saone, near Macon, the car he was driving was overturned through collision with another motor car. Charles Voisin was pinned beneath the car, and on it being raised it became evident that he been instantly killed.  Madame de Laroche, the aviatress, who was also in the car, was thrown clear of the wreck, but was severely injured.

Charles Davenport shook his head.  With all the talk of the dangers of the air, it seemed that indeed the motorcar was a far more dangerous sort of machine.  Though lacking in ability to touch the clouds, it seemed that more risks were somehow accepted on wheels than on wings.  He wondered aloud, Would such things ever change? 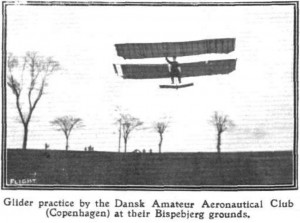 I shall read just a few more bulletins, he decided, then it shall be time to write some letters to the solicitors — the matter of the House, of course, was still at hand and he could not be shy about his position, after all.

Collyer-England School. — Wednesday last week G. N. Humphrey put in four circuits, doing exceptionally well on 40-h.p. Green-engined Collyer-England, and he appeared to be quite ready for his brevet.  Then handing machine over to Newton Smith, who did one circuit as a finish before dark.

Newton Smith Tuesday last in the Collyer-England biplane, in bad weather, was fighting against a strong disinclination of the air to lift his machine.  He steered away a bit too far before having felt the quality of the air.  Rising for a circuit he was out of the aerodrome at once over the ploughed land, and striking a remous, he managed to finish his little trip with a very successful pancake, resulting in one broken strut and slight other damage.

Issy to Calais in Three Hours

On the 25th Guillaux on his Clement-Bayard monoplane made a non-stop flight from Issy to Sangatte, near Calais, taking three hours for the trip.

Compared with the world’s record, the Italian altitude record is not very great, but it has been considerably advanced recently.  On the 22nd, at the military aerodrome at Aviano, Lieut. Montanari on a Blériot increased it to 1,600 metres, while Capt. Bougiovanni on the same machine took a passenger up to 1,400 metres.  Four days later the latter officer took up a passenger to 1,800 metres in 16 mins.

It has been decided to postpone the suggested flying meeting at St. Petersburg until next spring, when it will be held in connection with the flying race round the Russian capital and the fêtes to celebrate the tri-centenary of the reign of the Romanoff House.

As Charles stood, Geoffrey returned to the room, “Sir, Miss Smythe-Davis has arrived in the carriage with some news from London.”

With some frequency, Flight also published line drawings of the plans of some of the latest British and Continental aeroplane designs, a feature which proved quite popular among its readers.  Here is a design from the October 5, 1912, issue — an AVRO machine. 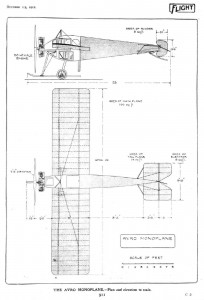 Many people can recount the history Farmen, Deperdussin, Voisin and Blériot — but who was Morel and what was his claim to fame?