At this writing, just days remain until American voters will cast their ballots for the Presidency of the United States.  Today’s political candidates fly “hops” around the country making multiple campaign appearances every day in each of the key media markets where they can influence voters.  To achieve this, they use chartered aircraft, typically Boeing 737s.  With the election season in full swing, we wondered just what was the first use of an airplane in political campaigning and by whom?

It turns out that the first use of an airplane was not by a Republican or a Democrat, but rather by a Socialist candidate for the White House named Eugene Debs.  His story and his first use of aviation in a President campaign is truly nothing short of bizarre — in fact, he campaigned from a prison cell as “Convict No. 9653”.  Of course, he lost badly in the election of 1920 to Warren G. Harding.  Yet one fact remains, from his prison cell campaign writings to his non-citizen status, to his one and only leaflet drop “to the masses” in Toledo, Ohio, Eugene Debs may have been the strangest candidate for the Presidency in the history of the United States. 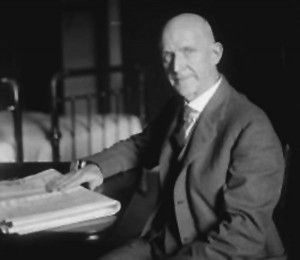 Debs in his cell in Atlanta Federal Prison, while campaigning for the Presidency; his prison bed is shown in the background.

Eugene V. Debs was one of the founding members of the American Socialist Party.  An outspoken labor organizer involved in organizing workforces of the railroads, he was a devout follower of the writings of Marx and Engels.  His impassioned pleas for socialism included numerous claims about the evils of capitalism.  By 1894, he was already organizing railroad strikes and making impassioned speeches about labor.  With the publication of Karl Marx, he became a serious organizer whose views divided America into the proletariat and bourgeoisie classes and called all wars the natural result of capitalism.

In 1918, he had already run for the Presidency four times and was 62 years old.  However, in each election, he had lost badly.  The next campaign was but two years away when, on June 16, he made an impassioned political speech at Canton, Ohio, before an academic assembly.  His focus was on analyzing the economic consequences of the Great War in Europe, in which the US Army and Navy were then engaged, and he strayed from his economic analysis into a rant about how citizens should not comply with military conscription, which meant he was advocating an illegal act.  He was arrested and put on trial in Federal Court in Cleveland, Ohio.  Though he spoke well, he chose to defend himself.  He was convicted handily under the terms of the Espionage Act.  As a sentence, he was stripped of his US citizenship and sentenced to ten years of jail. 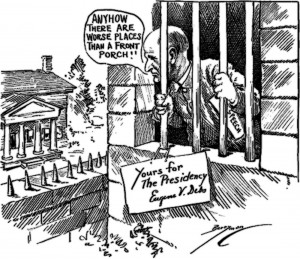 A cartoon depicting Eugene V. Debs and his quest for the presidency that ran on October 11, 1920. Source: Library of Congress

The 1920 Campaign and the Plane

Though no longer a US Citizen, Eugene Debs was still a fiery political figure.  Claiming that he was now a “citizen of the world” he went about organizing his fifth (and thankfully last!) campaign for the Presidency of the United States, once again as a socialist candidate.  Clearly he did not expect to qualify and win, however, this did not slow him down.  Lacking the ability to freely give public speeches and attract the attention of the news media, Debs decided to take his message directly to the people of Ohio (where he was being held) — and he ran his entire campaign from the Atlanta Federal Prison, under the title of “Federal Prisoner 9653” and “Convict No. 9653”.  Unabashedly and bizarrely, his campaign posters and campaign buttons featured images of him in prison. 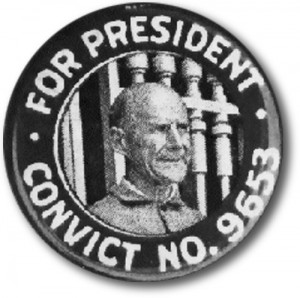 Lacking any ability to effectively reach “the masses” from his jail cell, he hired a local pilot and his airplane to carry his socialist leaflets and literature into the air and drop them on Toledo, Ohio, an industrial city of the Midwest’s industrial center.  The plane was a Curtiss JN-4 “Jenny”, a biplane that was a proven barnstormer and popular plane of the time.  The pilot, whose name is lost in history, encountered no difficulties in his mission and, on October 31, 1920, dropped Debs’ leaflets out of the plane.  The First Tuesday of November, election day when people vote in America each year, was just two days away.

So what were the leaflets?  Most probably, they were Eugene Debs’ famous leaflet entitled, “To the Woman Voter”.  Debs had been a lifelong advocate of women’s voting rights and equality.  His views in that regard were far more influential than his socialist leanings and he became one of the first to advocate equality of pay in the workplace, the right to work, and even the right to vote! 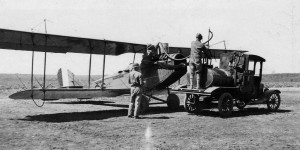 Though Debs did not win on election day, he did gain 913,664 popular votes.  He was shocked to discover, however, that only 3.4% of those who cast their ballots for him were women.  Despite his years of championing their right to vote, they rejected him based on his criminal conviction.  Notably, 1920 was the first year that women voted in the USA, after the passage of the 19th Amendment.  Nonetheless, it was his best showing of his five political campaigns!

Debs had chosen well by dropping his leaflets over Ohio because both of the two main party candidates were from that very state!  As it happened, Ohio Republican Warren G. Harding handily defeated Democrat James M. Cox, also of Ohio, in the election.  The 1920 election would be Debs’ last attempt at the Presidency.  At age 64, in just his second year of a ten year criminal jail sentence, he handed off the reins of leadership of the Social Party of America to another man and retired from Presidential campaigning.

On Christmas of 1921, President Harding issued a pardon of Eugene Debs.  Immediately, he was released from jail.  He retired to Illinois and spent the rest of his life campaigning against the poor conditions he had experienced while in the US prison system.  He passed away in 1926.  Few in established political circles missed him.  Weirdly, he is still celebrated by American socialists as a pioneer of their cause, long after the fall of the Soviet Union and the end of socialist as a valid political-economic movement in the Western world.

If you are citizen of the United States of America, next Tuesday, November 6, 2012, vote.  No matter what.  You vote is what makes America one of the strongest democracies in the world today.  The future depends on you.  Thank you.

Has America ever been subject to an aerial political leaflet drop any other time in its history?