Seventy years ago today in aviation history, deep in the South Pacific, three men sat in a single life raft adrift at sea.  Earlier, there had been three rafts tied together holding seven men, but in the past two days, four of the men had set out separately, hoping to row to safety on their own.  On the last raft, the three men were in terrible shape.  All were nearly dead from exposure, sunburn and dehydration, as well all injured from when their aircraft, a B-17D Flying Fortress, had ditched at sea 23 days earlier.  The leader of the group, Eddie Rickenbacker had lost count of the days.  Though the men didn’t know it, twice the newspapers in the United States had declared them dead.  The search had continued after the second week only due to the personal pleas of Mrs. Rickenbacker, whose opinion carried weight due to her husband’s status as America’s great pilot ace from World War I.  Incredibly, they had survived more than three weeks adrift at sea.

With little water and no food, the survivors were delirious.  One of their number, the eighth man, Alexander Kaczmarczyk, had already died on the 13th day.  Finally, on the 17th day, the men had seen a plane in the distance.  Nearly every day since, they had seen another airplane or two searching faraway.  It was perhaps just a matter of time before they too would be spotted — or so they hoped.  Finally, on November 13, 1942, the last three men alone in the last raft heard a distant rumble.  Looking up and too weak to stand, they saw a US Navy  OS2U-3 Kingfisher float-plane descend toward them and begin to circle.  A second plane flew on its wing.  During a low pass, Rickenbacker saw one of the pilots smile and wave.  But then, inexplicably, the two planes turned and flew away. 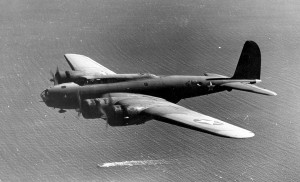 A B-17D Flying Fortress of the exact type and version that the men flew that day. Photo Credit: USAAF

At the beginning of October 1942, Eddie Rickenbacker, America’s leading World War I ace and president of Eastern Air Lines, had offered to undertake special missions on behalf of the Secretary of War, Henry Stimson, and Chief of Staff of the USAAF, Gen. Hap Arnold.  For an agreed nominal sum of $1 a day, Rickenbacker served undertook informal reviews and evaluations of US bases, forces and missions and carried out special missions for America in its first year of the war since Pearl Harbor.  Now, he was another secret mission, this one to deliver a personal message to Gen. Douglas MacArthur in the Pacific.

On October 20, he and his assistant, Army office Hans Adamson, first attempted to set out from Hawaii en route to Canton Island, a secret destination that to others was simply identified as “Island X”.  The plane had an aborted take off and suffered some damage.  In the event, the navigator’s sextant case also fell from his desk and, unbeknownst to the group, apparently the sextant inside was damaged.  The following day, the group took another aircraft, a B-17D Flying Fortress (Serial Number 40-3089) and they set out to Canton Island in a fairly uneventful trip.  Arriving at where Canton was supposed to be, however, they found nothing but water.  Only later would they surmise that the sextant had been knocked out of incorrect calibration.  This meant that they were off course by perhaps 100 miles or even more — but where were they?  Lost, they circled in a box pattern looking for the island. 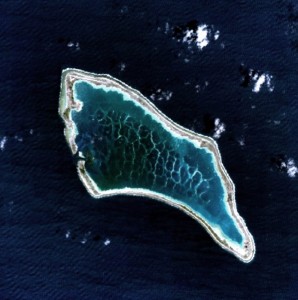 Meanwhile, they discussed the situation over the radio with Canton Island.  All the while, the fuel supply was slowly being exhausted.  The island could not give a bearing and so they had little to go on.  They got a heading but couldn’t tell if it was a reciprocal.  In hopes of conserving fuel, the pilot feathered two engines of the great bomber’s four.  As it was, they guessed wrong on which way to turn and finally, with no options and no fuel, they had no choice but to ditch in the water.  With ample time, they prepared — filling thermos bottles with water, packing food supplies and readying the life rafts.  Finally, they ditched.

It was a textbook perfect ditching.  Yet even then, as the plane sank rapidly and they were unable to get most of the supplies out, though they were able to get three life rafts clear of the aircraft.  With everyone on board the three tiny rafts, they discovered that all of their carefully packed rations and water bottles had been lost in the mad rush to get out of the plane.  They had four oranges and a few other supplies, including flares and a couple of pistols, which they hoped to use to shoot some of the fish or sharks for food.  Rickenbacker had shouldered some rope, which proved critical as they could lash the rafts together. 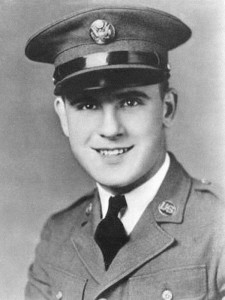 Alexander Kaczmarczyk, who perished on the 13th day — the only death among the eight men who crashed.

Over the next three weeks, the challenge of survival at sea was daunting.  The oranges were carefully doled out by Rickenbacker, who had been elected custodian of the fruits by the men.  Eight of them were adrift and so, every second day (the original plane) they would have 1/8th of an orange each.  On the fifth day, seeing the last orange was going bad, they finished it too.  The pistols grew rusty from the sea water exposure and their attempts at fishing were complete failures.  Sharks continuously hovered nearby and often bumped the rafts to see if something edible were within the reach of their teeth.

Finally, by a weird chance, a seagull landed atop Rickenbacker’s hat.  Slowly, he reached up with his hand and grabbed it by its feet, quickly wringing it neck.  They cut the bird up and ate it, saving the entrails for fishing.  With that as bait, they soon had a few fish.  Days later, a pack of sharks chased some mackerel past and two jumped into their rafts — it was a miracle of sorts.  Despite the sinking morale of the men, Rickenbacker encouraged them and kept them organized — the others later would credit him with their survival. 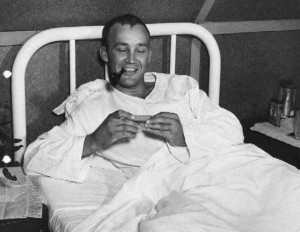 Rickenbacker recovering at the hospital following the rescue.

The Men Split Up and Get Rescued

From the 17th or 18th day (the men had lost count), they started to see aircraft in the distance.  Clearly, they had drifted close to some islands.  On the 20th or 21st day, the group of seven separated.  Four men on two of the rafts attempted to row for land separately.  Rickenbacker remained on the third raft with two of the men, the most stricken and weak of the seven survivors.  Finally, on the 23rd day, Rickenbacker’s raft was spotted by the US Navy Kingfisher float-plane.  After the planes flew off, the three men worried, but soon they returned. 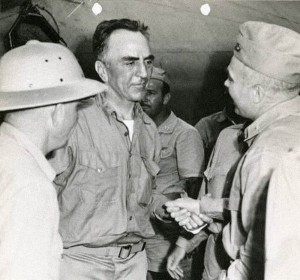 Eddie Rickenbacker after the rescue — recovering from the 23 day experience.

They planes had gone for fuel and had radioed the position of the survivors to their base.  A PT Boat had been dispatched to pick them up, yet the sun was setting.  As there were Japanese in the area, the pilots did not want to dare leaving the men overnight or marking their position with repeated flares.  Thus, one of the Kingfishers, piloted by Lieutenant W.F. Eadie of Evanston, Illinois, with radioman L.H. Boutte of Abbeville, Louisiana, descended and landed on the waves.  The plane taxied up to the raft.  Rickenbacker was able to grab onto the central float to steady themselves.  Carefully, the Navy crew lifted Adamson into the third seat on the plane.  Then they had Rickenbacker and Bartek sit on the wings.  Through the darkness, Lt. Eadie taxied across the water until they met up with the approaching PT Boat.  Finally, the men were safe. 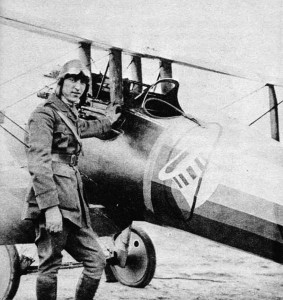 Rickenbacker during World War I — America’s greatest ace of that war with 26 confirmed kills, seven Distinguished Flying Crosses and the Medal of Honor.

All three rafts were found and the last seven survivors were all rescued.  One pair of men had made it to an island.  The other raft was spotted by a Navy patrol aircraft an rescued.  All faced weeks of recovery in the hospital.  The oldest of the men, Rickenbacker (he was 52), recovered enough to complete his mission and meet with Gen. Douglas MacArthur’s staff as well as complete a tour of Australia and some of the other Pacific sites, including Guadalcanal, then hotly contested battleground.  When they returned to Washington, DC, two months after having left, they were met at the airport by the senior brass of the USAAF and War Department.

Eddie Rickenbacker and the other men had somehow survived.  In the end, they completed their mission, against all odds.

The names of men who were aboard the B-17D that day were:

The B-17D had been upgraded with self-sealing fuel tanks and more armor along with seven machine guns, while the C-47 had none. Both had similar ranges, about 2000 miles.