By November 1917, the Great War had expanded to the farthest reaches of Germany’s colonial holdings in Africa.  British troops were marching on General Paul Emil von Lettow-Vorbeck’s bush army in German East Africa, a sub-equatorial area that today is split into the states of Tanzania, Rwanda and Burundi along Africa’s central eastern side.  Running low on supplies, cut off from maritime shipping by Britain’s powerful navy, the German forces were desperate.  Facing near hopeless odds, Berlin hatched an innovative plan to airlift the supplies across the 4,500 miles that separated Germany from its colonial holdings.  To carry out the plan, the Zeppelin LZ104 was tasked to fly a secret one-way mission into the darkest corner of Africa and deliver 50 tons of supplies.  It was to be a one-way trip that, if successful, would be the longest aerial flight in history. 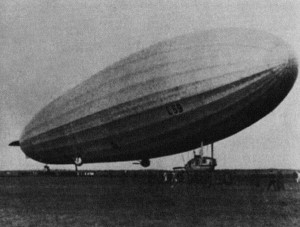 A little known chapter in the history of World War I involves General Paul Emil von Lettow-Vorbeck and his small force of Germans which was supported by approximately native Askari troops.  This small force, which at the beginning of 1914 numbered just 110 German officers (of which 42 were medical personnel), and 126 non-commissioned officers, overseeing just 2,472 native Askaris, was vastly outnumbered by the British force.  Facing 8-1 odds, Letow-Vorbeck had achieved decisive victories in 1914 before having to resort to guerrilla warfare.  Since then, he had held on and had grown his forces to nearly 12,000 men, most of which were Askaris.  Yet by November 1917, supplies and ammunition were running out and Lettow-Vorbeck’s army was under attack by a nearly 300,000 man strong mixed army of British and Portuguese forces. 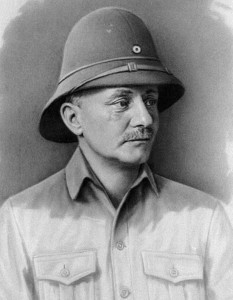 The famous Hugo Eckener himself piloted the Zeppelin LZ104 south through Europe to the last airfield where Germany could expect assistance — a 29 hour flight that began in Friedrichshafen and took the LZ104 to Jamboli in Bulgaria where another captain awaited, the German Navy Kapitänleutnant Ludwig Bockholt.  The mission was code-named “China-Sache” (i.e., China Show) and was intended to be kept secret to avoid the possibility of interception by British aircraft based in North Africa.  However, the secret was soon out as British code-breakers had cracked the German military codes.  Almost immediately, they intercepted messages concerning the Zeppelin mission and its itinerary.  The RFC then sent messages to its squadrons in Egypt ordering them to intercept the Zeppelin.

On November 21, 1917, today in aviation history 95 years ago, the Zeppelin LZ104 (designated the L.59 for tactical operations) departed from Bulgaria on its ill-fated mission.  Ahead were thousands of miles of territory without support and devoid of any friendly airfield.  Since no hydrogen gas would be available in German East Africa to replenish the Zeppelin’s gas bags, the flight had to be one way.  After arrival, the L.59 would be stripped and cannibalized.  Flying at nearly full throttle, the Zeppelin could achieve 50 mph — fast enough to reach its destination, which was hoped to have been achieved in approximately 100 hours.  Nonetheless, such speeds were not fast enough to outrun any British aircraft that might intercept it.  In fact, the L.59 was a “sitting duck” if it was sighted by the British. 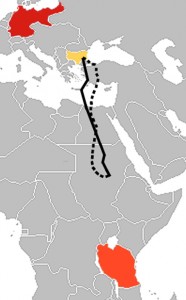 Route of the Zeppelin L.59 on its ill-fated mission to German East Africa. Illustration Credit: Chrischerf (via Wikipedia)

After departing from Bulgaria, the Zeppelin L.59 passed over Adrianople as it flew across Turkey and the Sea of Marmara before heading out over the Mediterranean Sea.  Thereafter, it took a course directly for Crete.  There, the L.59 was beset by storms, lightning and high winds.  It radio antenna was retracted to prevent its loss and the attraction of lightning strikes, which also meant that the airship was out of communication.  Thus, it missed several critical messages from the German Navy regarding the mission.  Forging on, the L.59 crossed the coast of British-held Egypt at 5:15 am on November 22 — from there on, she was in serious danger of interception by British fighters.  She worked her way south at top speed, criss-crossing the Nile in hopes of avoiding detection.

Yet another communications problem emerged in the mid-afternoon when she lost an engine.  The gearbox housing cracked from the stress of running at high speed.  Coincidentally, that engine also powered the airship’s radio transmitter, which meant that the Zeppelin was only able to receive messages but could not relay her position reports back to headquarters.  The crew was also severely affected by the heat of the day.  When night fell, the near freezing cold of the desert air further debilitated the crew.  It also affected the hydrogen gas through cooling.  With the accordant loss of buoyancy, followed by thermal-driven turbulence from the sun’s rapid reheating of the sand dunes at dawn, the Zeppelin nearly crashed early on November 23.  With the oppressive heat of the new day, the crew was soon in worsening condition, suffering from headaches and fatigue.  Some began to hallucinate.

In the meantime, the British began to broadcast recall messages of their own to the Zeppelin.  These were disguised as German Naval communications, transmitted in perfect code as a ruse in an attempt to change the mission.  Somehow, the messages were not received and the L.59 forged on.  As well, since it was unable to broadcast its position, the Zeppelin flew on in radio silence.  This stymied British interception plans since they had no position reporting messages through which to track the airship and direct their fighters.  It was a lucky twist for the Germans who thus flew on unimpeded despite a large British aerial search across much of Egypt.

The Zeppelin L.59 made it out of Egypt and was more than halfway to German East Africa when a different message was received, this time from Lettow-Vorbeck himself, as relayed through the German Naval HQ Nauen, in the Brandenburg district of Germany.  The message was clear — it was a recall order.  In the preceding hours, the British had managed to dislodge Lettow-Vorbeck’s forces from the intended landing zone on the plains near Mahenge in German East Africa.  Lettow-Vorbeck’s troops had retreated into the mountains.  With the peaks and rocky slopes, landing there would be impossible.

Aboard the L.59, Kapitänleutnant Bockholt faced a hard choice.  The mission would undoubtedly fail if he proceeded.  Nonetheless, he considered that perhaps a crash in the mountains might allow some of the men and supplies to be recovered.  His crew urged him to press on, but the orders were unequivocal.  He did the correct thing and turned around to return to Europe.  Once again, he worked his way across Egypt, somehow again avoiding detection by the British search aircraft.  He quite nearly retraced his path back to Germany, this time avoiding Crete. 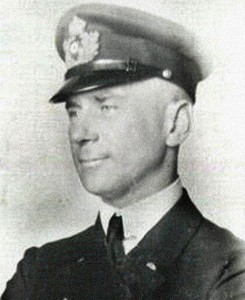 Portrait of Kapitänleutnant Ludwig Bockholt, commander of the Zeppelin L.59.

In the end, the L.59’s mission took 96 hours and traversed 4,199 miles.  He averaged a speed of 44 mph, despite the loss of one of the engines.  The crew, in desperate shape after two transits of Egypt and having endured great temperature extremes and dehydration, had kept to their posts the whole way.

Nonetheless, the mission of the L.59, known thereafter as “Das Afrika-Schiff”, was a strategic failure.  Above all, it was a heroic, extraordinary and record-setting flight even so.  The distance flown non-stop would remain an unbroken record for years afterward — it was, in the final analysis, a glorious flight.

During World War I, the German fleet of Zeppelins undertook the first strategic bombing missions in history, targeting British and French cities and towns, including their civilian populations in night raids.  These were the first “modern” strategic bombing campaigns in history.  The British responded by deploying squadrons of high flying aircraft to intercept and shoot down the Zeppelins.  The Germans, in turn, changed tactics and pioneered new, lightweight and higher flying Zeppelins.  When the British deployed higher flying fighter planes, the Germans took to flying over England on nights when there was unbroken cloud cover, which kept the RFC and Royal Navy planes on the ground.  To enable bombing from above the clouds, the Germans pioneered a small hanging, manned air car that would be lowered on a cable from far above.  Once it was hanging below the clouds, the two man air car crew would report positions and instructions via a wire for communications.  The crew in the gondola above would thus know the right time to drop their bombs.  Such air car duties were clearly extraordinary dangerous, though few losses were suffered.

What happened to the Zeppelin LZ104/L.59 after the failed resupply mission to German East Africa?


Das Afrika Schiff exploded in flight on April 7, 1918 while flying en route to Malta to attack a British base there. The reason for the explosion was never determined.