Ocean to Ocean in the Vin Fiz

The prize money was extraordinary, $50,000 offered by the famed publisher named William Randolph Hearst for the first “ocean to ocean” flight across the United States.  For Calbraith Perry Rodgers, it was an opportunity of a lifetime.  Unable to afford the flight on his own, he scouted for sponsorship and soon found a willing partner in J. Ogden Armour, who owned the Armour meat packing companies and a host of other food and beverage businesses.  Armour wished to use the flight to promote his famous soft drink, Vin Fiz.  Two machines were purchased, a support team hired and a special set of railroad coaches with a dedicated steam engine to be known as the Vin Fiz Special was booked to accompany the flight across the nation.  What followed was a 70 stop, 4,212 mile, 49 day journey punctuated by 16 crashes. 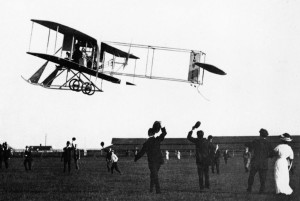 The Vin Fiz takes off from Sheepshead Bay, Brooklyn, New York, at the beginning of the 70 day odyssey that became the first successful transcontinental aircraft flight in history.

The Wright Flyer EX was difficult to fly, sensitive and under powered with an engine of just 35 hp.  At best, it could achieve 50 mph.  Some accounts state that it could climb above 1,000 feet, though this is incorrect because at one point, Rodgers had to clear a mountain pass that was over 5,082 feet high, a challenge he reported in a wire sent between the towns of Alpine and Marfa while en route to El Paso, Texas.  Such challenges were new to Rodgers, who was but a novice pilot.

In fact, he had taken his first flight lessons from the Wright Brothers in March 1911 while visiting his cousin, John Rodgers, an early Navy flyer.  Calbraith had passed his brevet with the Fédération Aéronautique Internationale only in July.  The Wright Flyer EX he and the Armour companies purchased for the flight was the exhibition version of the Wright’s 1911 machine, sporting shorter wings so that it could fly faster.  It was fitted with but one seat, whereas other 1911 machines were usually fitted with two seats.  The EX and the B models, which were closely related, had the elevators moved to the tail and featured two “blinders” mounted on the forward struts for increased stability. 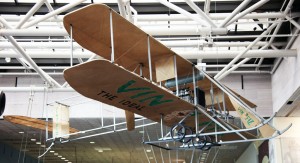 His first major crash was a Middleton, New York, and the Wright Flyer EX ended up a tangle of struts and torn fabric, its tail pointing vertically toward the sky.  A major rebuild was in the offing.  After that, he crashed many more times, though most were minor accidents involving a few broken parts that could be repaired in the morning or by the next day.  Many times, Calbraith Perry Rodgers only survived by luck and happenstance.  Yet in the end, he made it — a hard journey that cost him much of his hearing and yet made him famous for his exploits.  He did not achieve the 30 day requirement to complete the “ocean to ocean” flight and so did not receive the $50,000 Hearst Prize, but it was still a successful venture.  As well, for Armour and the Vin Fiz soft drink, it was the best advertising that the company had ever done. 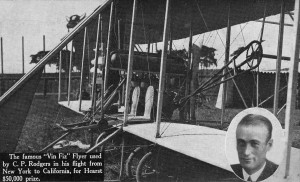 Contemporary postcard of the Vin Fiz, with inset image of Calbraith Perry Rodgers.

Having made it to Pasadena, his flight was officially over, but he felt that he still hadn’t achieved his goal, since he was 20 miles short of the ocean.  Nonetheless, the official portion of his trip was completed — it was a wonderful ending to a daring journey.  A correspondent named E. W. Hewson described his descent and landing in Pasadena:

“Spiraling downward from dizzy heights above, the greatest aviator in the world, who by sheer force of will and nerves of steel, had accomplished the impossible, stepped out from among his frail fabric of wood, wires and canvas to be wrapped in the American flag by Mrs. R. D. Davis, wife of the president of the Board of Trade, and Miss Irene Grosse.  Thousands swarmed on the field to pay tribute to Rodgers.  He was encompassed by battalions of the sweetest, fairest women in the land, the elite of all that is beautiful in Pasadena, conquered by a brave man and mighty pleased with the conqueror.”

Though it seemed that Rodgers may have been the first pilot to enjoy the “Top Gun” effect on the ladies, he was left unsatisfied.  Still desiring to “tag” the Pacific, to use his term, some days later he set out to fly the remaining 20 miles to the Pacific Ocean.  On the way, he crashed twice and broke his ankle, which required hospitalization.  Three weeks later, he started once more and this time landed on the beach and dipped the landing skids of his Wright Model EX into the surf.  It was an apt ending to the journey, all the more so in that just a few pieces of the original plane that had departed from New York remained, including one of the landing skids, one vertical rudder and perhaps the engine’s oil pan.  The rest of the plane was “as good as new” — because it had been rebuilt all along the way. 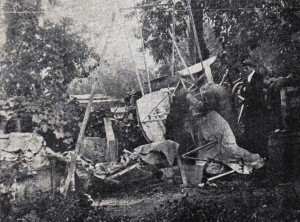 Wreckage of the Vin Fiz after the major crash at Middleton, New York.

Calbraith Perry Rodgers, like many early aviators, perished in a plane crash just a year and a half later, in fact, quite near where he had finished his flight on the beaches of the Pacific coast.  While flying the spare plane that had been purchased for the trip, he flew into a flock of birds.  The plane was damaged and crashed into the water.  Perry was killed on impact.

Today, the grape drink Vin Fiz is little known.  Perhaps the closest thing to Vin Fiz on the market today is the vintage flavor called Red Ribbon Grape Soda — you can buy a bottle here.  As for the Armour company, they’re still going strong, all these years later. 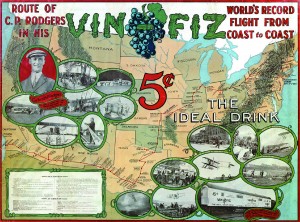 The route of the Vin Fiz as depicted on a contemporary advertising poster — click to enlarge to see details and stops.

Calbraith Perry Rodgers left Sheepshead Bay, Brooklyn, New York, on September 17, 1911, at 4:30 pm.  He reached Pasadena, California, on November 5, 1911, at 4:04 pm, where his landing was greeted by a crowd of 20,000 people who came in response to news reports and advertising by the Armour companies.  Along the way, he pioneered a route across the country that had mostly never seen an airplane before — crossing the eastern mountain ranges by going along the southern border of New York state, then heading across the industrial Midwest to Chicago before turning south and flying across the farmlands of Illinois, across the farmlands and plains of the rural parts of the central USA.  After that, he crossed Oklahoma and the flat lands of West Texas, before dashing across Arizona and New Mexico to reach southern California.  It would be a route that would be quite nearly duplicated dozens of times afterward by countless pilots, as it avoided the high peaks of the Sierras and the challenges of the northern reaches.  Rodgers had mapped his route well — and he made a bit of money from the Armour company too, which had promised him a payment per mile flown, even if he didn’t win the Hearst Prize.

Do you have Moxie?  If so, what is it?  What is the original meaning of the term?