One a Day in Tampa Bay

On this date in aviation history, November 25, 1940, the Martin B-26 Marauder made its first flight.  A radical design, it was a sleek, bullet-shaped medium bomber that had powerful engines and an extremely small wing.  Relying on speed, it was offered to the US Army Air Corps as the ideal solution for tactical bombing.  Yet it also proved diabolically difficult to fly, particularly on one engine — the natural result of high wing loading.  The aerodynamically optimized design offered its pilots little margin for error.  While Martin claimed that the plane was perfectly safe in the hands of experienced skilled pilots, with the pace of pilot training, it was soon put into the hands of new trainees.  What followed, predictably, was a disastrous series of crashes that nearly resulted in the cancellation of the aircraft contract and gave rise to the term, “One a day in Tampa Bay”.  From this inauspicious start, however, the plane would rise to become one of the most effective bombers in history. 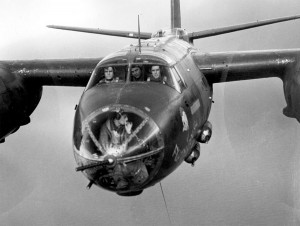 A Martin B-26C Marauder — showing the tight lines and small size of the medium bomber. Its crew gives off an air of confidence. Photo Credit: USAF

With intensive twin-engine bomber transition training under way at Tampa, Florida, the US Army Air Corps was losing B-26s and flight crews at an astonishing rate.  While the phrase, “One a day…” was overstated, it wasn’t by much.  In the worst month, the Air Corps logged 15 crashes in just one 30 day period.  The situation got so bad that the pilots took to giving the plane nicknames that highlighted their view of the plane’s deficiencies —  “Martin Murderer”, “Flying Coffin”, “Widowmaker”, “B-Dash-Crash” were but a few.  In addition, sexist terms were applied to the plane (which was a result of the tradition that planes are referred to by feminine pronouns — as “she”).  These derogatory names included, “Flying Prostitute” and “Baltimore Whore”, both names reflecting that the plane was “so fast” and had “no visible means of support”, Baltimore being highlighted as that was where the plane was built. 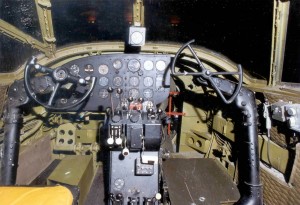 The cockpit of the Martin B-26G Marauder — this example is located at the National Museum of the U.S. Air Force. Photo Credit: USAF

The situation got so bad that the US Congress held hearings before the Senate Special Committee to Investigate the National Defense Program.  The head of the  Glenn L. Martin Company, Glenn Martin himself, was called to testify.  He faced no less than Senator (later Vice President and then President!) Harry S. Truman who demanded to know why the wings couldn’t be lengthened for greater stability and safety.  Glenn Martin replied with the usual aerodynamic explanations but then ended with the flat statement that anyway, the contract was already awarded so he had no incentive to fix the problem.  Sen. Truman, in classic form, leaned forward and noted that the contract could be cancelled then just as well.  Glenn Martin went back to Baltimore and immediately had the modifications done. 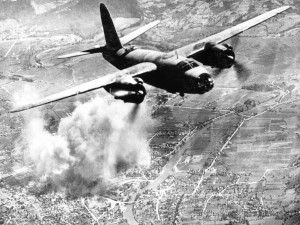 An RAF Marauder coming off the target at Banja Luka, Serbia, the results of the group’s bombing can be seen behind the aircraft. Photo Credit: RAF

The Martin B-26 Marauder was assigned in large numbers to the 9th Air Force and deployed to England where it flew from dozens of bases against targets in France and Germany.  As well, it served in virtually every other theatre of World War II, including being based in North Africa, flying in the Pacific and with multiple other air forces, including the RAF and Free French forces.  Still, it was in Europe in the hands of the USAAF that the Marauder had its finest hour, facing the intensive and deadly Luftwaffe air defenses, including the Luftwaffe’s expert anti-aircraft artillery units that fields the 88 mm guns that were both highly accurate and well manned. 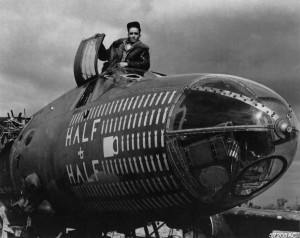 At first, the 9th AF crews followed USAAC/USAAF policy and flew at low altitudes on their raids into France.  The idea was that from lower altitude, the bombers could target tactical targets with near pinpoint accuracy.  Instead, what it meant was that the Luftwaffe flak was even more accurate and deadly.  The B-26 bomb groups suffered extraordinary casualties.  In some units, as many as half of the planes were shot out of the sky in just their first few weeks of combat.  After that, an evaluation of tactics revealed that higher altitudes meant higher survivability and losses dropped dramatically.  The small bullet-shaped plane with its tiny wings proved that much harder to hit than the B-17s and B-24s that flew daylight missions.  It was simply a question of the size of the plane — the larger the plane, the more flak shrapnel it would collect on a typical mission. 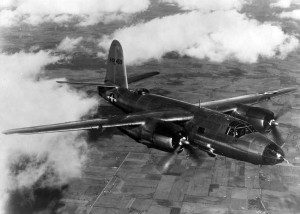 At the end of the war, the final evaluation reports were clear — the Martin B-26 Marauder, despite its terrible training record, had proven to be the most effective, most survivable plane of the war.  If pilots could master it in training, they had the best possible chance of surviving their full tour at war.  The speed and small size of the Marauders made them a difficult target for the Luftwaffe.  In the end, that proved to be the tactical trump card that helped prepared the way for the landings at D-Day.

After World War II, despite the bombers stellar combat record, it was retired from the USAAF.  Thousands of the planes were scrapped and went to the smelters.  Other aircraft, like the Douglas A-26 Invader, were preserved in USAAF and later USAF inventories where the tactically-focused medium bomber concept continued to prove its worth.  Whereas the Martin B-26 Marauder had seen the end of its operational days, the last Douglas A-26 Invaders (renamed B-26s by the early 1950s) were retired only after the Vietnam War, fully 30 years later.  One wonders just how well the Martin B-26 Marauder would have fared had it been kept in inventory into the Korean War.  Quite likely, it would have proven to be the workhorse of Korean War tactical bombing.

The nose of the Martin B-26 Marauder “Flak Bait” is on display at the National Air & Space Museum in Washington, DC.  Why is that plane featured there and what was its claim to fame?


“Flak Bait” is credited with flying 207 combat missions in the European theatre, more than any other bomber in the USAAF. Along the way it absorbed over a thousand hits, several engine and system failures and even returned to its base on one engine a couple of times. This proved the validity of the design and crew training.

While only the front portion of the fuselage of “Flak Bait” is on display at the Smithsonian, if one so desires a complete representation of “Flak Bait” can be had in the form of a Revell model kit.


Thank you for this article that will go into the Auer family history. My Dad, Lt. Col John Auer, shared some stories with me and my family about this plane & the A26 in Korea. I’m proud to say that he survived both wars, earning many medals, without accidents. He also later flew F-80s & F-84s.

After retirement from the Air Force, he flew state planes without accidents. He and his wife Barbara enjoyed a long & happy life.

He passed away recently in North Carolina at the age of 90 and she is now living in Cary, NC.

There are some good stories about the A-26 Invader that I hope you can find. You will find one in the New Bern, NC, newspaper under WWII Diaries.


My first Air Force Squadron commander flew the B-26, he loved it. I once read the Army Air Force got female WASP pilots to fly the machine as a way of “shaming” male trainees into taking a STAB at it. Any recoverable in Tampa Bay?


These bombers were the elite.
http://ltjackforce.hubpages.com/hub/World-War-2-Tactical-Bombers


The front shot of the B-26C at the top of the page was my grandfathers plane. He was the crew chief and took great pride in the fact that the plane flew 76 missions without a mechanical failure. It bellied in on the 77th mission and was later scrapped.

The plane’s name was the “Fightin’ Cock”, you can just make out the rooster head under the pilot. It flew with the 322 BG 450th BG. At the time it was in service it had the same mission total as Flak Bait for total missions before it was badly damaged and forced to land. They were stationed at the same field.


My dad was a pilot, a high ranking officer, and trained others to fly the B-26. He was based in Tampa during part of World War II. He did not talk much about the war but as a young kid I loved hearing him tell the adventures of the B-26 and the phrase “one a day in Tampa Bay”.

After the war, he was with military intelligence and then became a special agent for the Treasury Department, but his stories about the B-26 always made me smile. When I asked him why did didn’t keep flying he said that if your not piloting a B-26 then your not really flying.

We lost him a few years back. RIP dad, I miss you every day. You have always been my #1 hero.


Why is it that “only the front portion of the fuselage of “Flak Bait” is on display at the Smithsonian”? What happened to the rest of it?

My understanding is that Jimmy Doolittle himself went to Tampa and saved the B-26 program from cancellation and that experienced pilots loved the B-26!