To India by White Moth

“The KING has been graciously pleased to approve of the award of the Air Force Cross to Mr. Thomas Neville Stack (Flying Officer, Reserve of Air Force Officers), in recognition of the distinguished service rendered to aviation by his recent flight in a light aeroplane from London to Delhi.”

A like award notice from the Air Ministry was published for Mr. Bernard More Troughton Shute Leete (Flying Officer, Reserve of Air Force Officers) in the Supplement to the London Gazette, 3 June, 1927.  Such small notice, however, does nothing to describe the challenges faced by the two men, who each took a DH.60 Moth, a tiny biplane with a Cirrus 27 Hermes engine boasting just 60 hp — nor does it truly reflect their lasting impact in India.

The DH.60 type of aeroplane was meant more for flight training than long distance travel.  Certainly, it was hardly a match, one would have thought for a flight all the way to Britain’s largest colony of India.  In fact, the two men faced a distance of 5,540 miles, a journey they would undertake in a pair of planes that normally cruised at speeds of just 70 to 75 miles per hour.  Even if T. Neville Stack was known for his long distance flight records, this was to be an extraordinary trip.  Yet the real impact of their trip had nothing to do with the challenge of getting there.  Instead, it had everything to do with what they would do once they arrived in India.  Their effect on Indian aviation would be profound, with lasting effects that remain evident even today. 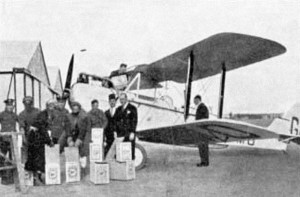 Refueling one of the two DH.60 Moths in Baghdad, Iraq.

On November 15, 1926, the two men set out in their two planes, both De Havilland DH.60 Moths, that they had taken out from the Lancashire Aero Club, at Woodford Aerodrome. The Lancashire Aero Club had been formed in 1922 — just four years earlier — and  T. Neville Stack was its Chief Flight Instructor.  The two DH.60s had only been delivered less than a year before — and were of the first two dozen DH.60s manufactured.  The Aero Club’s first powered aircraft were another two Moths — one arriving in July 1925 and the other in August 1925.  Yet these two newer planes were silver winged and white, even if this out of step with the tradition with that branch of Britain’s five Aero Clubs, which would have painted the planes fuselages in blue.  Thus, the aircraft were nicknamed “White Moths”.  To make the flights work, they planned legs of six hours so as to make their way to India with greater speed. 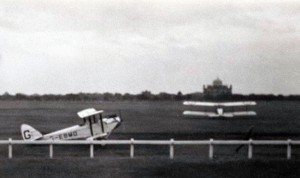 The Flight to India

Even with six hour legs, the two men would take nearly two months to complete their voyage.  Along the way, they encountered numerous difficulties and faced many challenges, including flying through over 250 miles of horrific weather.  In retrospect, the flyers should never have flown on such days, but they had persevered and were lucky to “come through”.  As well, they had challenges securing support and fuel for their journey.  The flyers chose a route that began in Croydon, England, and flew down through Europe, then across the Mediterranean and eastward to Hinaidi Aerodrome in Baghdad, Iraq, before skirting the Gulf coast of Persia and turning to follow the coastline of Baluchistan to Karachi.

They put on exhibition flights at various stops along the way — five such exhibitions in all — which were well-received at each site.  In the words of the London Times, the flights “proved valuable in increasing British prestige.”  Most notable of these was a stop in Bushire, Persia (modern day Iran), where their arrival happened to coincide with a trip by a group of Persian officials intending to undertake discussions with the British Resident Officer.  The Persians were greatly impressed by the aerobatics show that the two men put on, which affected their follow-up discussions with the Resident Officer as well, to Britain’s benefit. 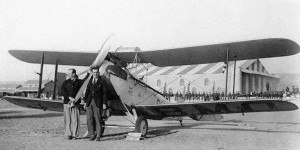 In India with one of the two White Moths.

They arrived finally in Karachi on January 8, 1927, to a grand, municipally-sponsored welcome.  Their arrival triggered a full display with special trains running from the surrounding countryside to Karachi.  These trains brought Indians to the city to see the aeroplanes first hand (at that time, what is now Pakistan was part of the Greater India).  The men put on a series of exhibition flights that were attended by thousands.  As a result, the local population elected to found the Light Aeroplane Club of Karachi, perhaps the oldest such club in all of the Indian subcontinent.  To assist, T. Neville Stack flew around the Karachi area and surveyed possible landing field sites from the air, so as to help them establish their own civilian airport.  As well, the two men offered very valuable lessons on how to run aero clubs, how to set up flight training and more.  Recognizing the need for aeroplanes of their own, some of the new members of that newly founded club left Karachi bound for England with the goal of acquiring the right types.

From there, the pair continued on to Delhi, India, where they put on yet more flying displays.  When approached by the British administrators with a request to do something to help fund charities, the two men auctioned four flights to would-be passengers, who agreed to donate 250 rupees each — a total of 1,000 rupees — to the selected charity.  Two of the flights were purchased by Indians and the other two by British.  This helped establish the positive aspects of civilian aviation among a population that previously had largely seen British military aeroplanes in action, including in Afghanistan, where they had served as well in bombing missions.  Overall, their many exhibitions in India had a profound effect.  As related in the London Times, “there was a general eagerness on the part of the younger generation of educated Indians to make aeroplane flights.”

After finishing their tour together in March, T. Neville Stack returned to England.  His compatriot, B.S. Leete, remained in India with both aeroplanes and continued his aviation demonstrations.  Stack would go on to fly numerous other journeys to India over the following years and would ultimately found an airline there — Orient Airways.  As a result of their long journey to India in those days, years ago, civilian flying became a widely held interest.  Today, many young flight students train every year and take jobs throughout Asia flying for airlines.  The future of aviation in central Asia owes a debt to these two men, who introduced light training planes to the region.

As it happened, their flight, which began from Croydon today in aviation history in the year of 1926, may have been the first long distance flight in aviation history where the journey turned out to be less important than what was done after arrival.

Often it is said that T. Neville Stack committed suicide in Pakistan during a judicial detention while his airline, Orient Airways, was being investigated.  This story stands as a black mark on T. Neville Stack’s reputation — however, it is undeserved.  Why?  And what was his real cause of death?  Was it suicide after all?


Well, it seems he was run over by a truck while walking to visit his priest — whom he was allowed to visit every day. The Police said he threw himself under the truck, which is curious indeed — especially when on one’s way to visit a priest — suicide being somewhat inconsistent with that behavior.