Today’s date in aviation history marks the passing of America’s first truly “All-American” Ace, Douglas Campbell who died in 1990.  A patriot and an upper class member of the east coast elite, Douglas Campbell was enrolled in Harvard University when the war broke out.  Like most Americans and including his classmate Quentin Roosevelt (former President Theodore Roosevelt’s son), Campbell watched with interest as Europe engaged in the bloodbath that was the “Great War”.  Finally, in 1917, America entered the war.

A patriot, Campbell quit Harvard and joined the US Army, intending to fly fighter planes against the Germans.  His wish would be granted — it wouldn’t be long before he arrived in France and faced his first mission from Gengault Aerodrome near Toul, France.  Together with two other pilots, Eddie Rickenbacker and Raoul Lufbery, Douglas Campbell took off in a Nieuport N.28C-1, one of America’s first warplanes (being purchased from France).  Together, the three marked America’s first patrol by America’s first fighter unit, the 94th Aero Squadron, the famed “Hat in the Ring”.  It would be quite a mission — due to supply problems, none of the planes were armed.

While other American pilots had fought for France in the Lafayette Escadrille, including Eddie Rickenbacker, and had become aces, it would fall to Douglas Campbell to become America’s first truly “All-American” ace, scoring his kills while flying for the United States of America, rather than for France.  In addition, Douglas Campbell set an early and very high standard for the other pilots of the squadron — he flew the first mission (unarmed, as noted) and also scored the first kill of the squadron.

It was only when the first weapons and ammunition began to arrive (supply problems plagued America’s first aviators at war), that some machines could be armed.  With a shortage of machine guns, however, Douglas Campbell’s Nieuport 28C1 was equipped with just one, rather than the two that it was designed to carry.  Likewise, other pilots had to make do — Eddie Rickenbacker, for instance, believed in high firepower as the key to combat and his later SPAD S.XIII was over-fitted with not two, but rather three machine guns on the nose.  Yet it was with just this one gun that Douglas Campbell engaged in combat, knocking down a pair of German aircraft with the help of Lt. Alan Winslow, with whom he shared credit for the two planes.  The two enemy pilots, from Jasta 64w, survived and were captured.

Quickly, Campbell gained experience, not only in handling the aeroplane but as well in using it as a machine of war.  There was a vast difference between flying and fighting in the sky, as many learned in difficult and unforgiving circumstances.  It was at this “sport” that Douglas Campbell excelled, even more than in the sports he had played while at Harvard, where he was noted as a skillful and cunning opponent in everything he did.  Douglas Campbell downed his fifth enemy aeroplane while on a mission over Lironville, France.   Thus, he became the first ace to have trained in, flown in and fought from an American squadron in the war.

Douglas Campbell watched as many of this friends in the 94th Aero Squadron flew and didn’t return.  His closest friend from Harvard, Quentin Roosevelt, was shot down and killed.  Others fell as well.  The toll of combat was apparent — every day could spell the end of a fighter pilot’s life.  By 1918, the Germans were equipping with new “super fighters”, including the Fokker D. VII, an awesome machine.  As well, some of the German Jasta fighter groups had become not only expert but also attracted nothing but the best.  Indeed, unlike the American squadrons, the best German commanders would recruit the best pilots they could find from the other Jastas, sometimes pulling men from bomber and reconnaissance squadrons where they showed combat skills and intense killing drive.  The results were apparent.

Yet it wasn’t these hunter-killer squadrons or men like Ernst Udet or Verner Voss, or a host of other German fighter experts that took down Douglas Campbell.  Indeed, he was probably a match for their skill, though his Nieuport 28 was not quite a match for the newer generation of German planes.  He was injured instead by a lowly ground gunner who fired an anti-aircraft artillery shell.  The round missed, but shrapnel cut into Campbell’s back, severely injuring him.  He survived but was sent back to America for recuperation.  By the time he was ready to return to combat, in November 1918, the war was all but over.  On November 11, 1918, the Armistice was signed, signalling the end to hostilities. 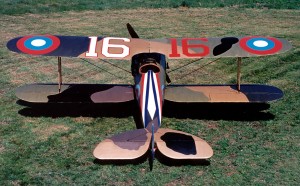 Douglas Campbell would never fly combat again.  Instead, he took a position with W.R. Grace and Company, one of America’s largest shipping firms.  In the decade after, W.R. Grace and Pan American would create a joint venture that became known as the airline PANAGRA, which essentially flew Pan Am’s flight operations south of Miami down into Central and South America.  He itched to rejoin the flying world and finally was able to work his way into a senior position at Pan American Airways as Vice President — the year was 1939 and at the time the world was poised to enter into another global war, World War II.

Throughout the war, Campbell served as Vice President and then afterward, in 1948, he rose to the position of general manager.  He worked a full career at Pan Am, helping to guide the airline into the new jet era.  It was a fitting career for America’s first “All-American Ace”.

Douglas Campbell passed away at the age of 94, on December 16, 1990, in Greenwich, Connecticut.

Another Bit of Aviation History

While it is worth noting that Eddie Rickenbacker ended World War I with 26 kills to his credit, making him the leading ace of the war, he had no illusions.  Having watched the carnage of war and experienced the fickle quirks of good and bad luck, sometimes saving his life, other times ending the lives of others with whom he flew, Rickenbacker knew that to survive the war was its own victory.  As for who was the best pilot of the 94th Aero Squadron, Rickenbacker pulled no punches — others had been better than him, just not as lucky.  The best of the best, he had said, was Douglas Campbell, who, according to Rickenbacker, shot down 7 enemy aircraft (he was officially credited with 7 kills).  Rickenbacker said that had Campbell not been injured, he would have undoubtedly surpassed his own record of 26 kills by the end of the war.

The 94th Aero Squadron and its descendents remain one of the best known fighter squadrons in US history.  However, another squadron holds the record for the most aircraft shot down in the next major war — World War II.  Which squadron was it and where was it based (until D-Day)?