Fifteen years after Germany’s defeat in World War II, in July 1960, the West German Luftwaffe had reformed into a modern, capable jet force.  As an integral part of NATO, the new Luftwaffe transitioned from F-84 and F-86 fighter jets and reequipped with the Lockheed F-104 Starfighter.  The Germans committed themselves to the largest Starfighter purchase in all of NATO — out buying even the US Air Force.  However, as the Starfighters came on line, they began to suffer accidents.  In 1961, just two crashes took place as the planes were only just entering service.  Yet by 1962, flight operations were expanding and the Luftwaffe was taking deliveries of more aircraft — as a result, there were seven crashes.  Then, there were twelve more in 1964.  In 1965, a total of 28 F-104 Starfighters crashed.  In the first half of 1966, the situation reached crisis levels when another 61 crashed.  More than half of the pilots died, resulting in the plane being nicknamed “Witwenmacher” (Widowmaker). 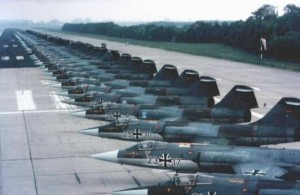 A line up of Starfighters, parked after the grounding.

Something had to be done — yet what?  As the political wrangling began over whether the acquisition had been politically motivated, many claimed that the fighter was fatally flawed.  The turmoil even rose to the height of the commander of the Luftwaffe who, after making accusations of his own, was forced to resign.  Thus, today in aviation history, on December 6, 1966, the West German Luftwaffe took the extraordinary step of grounding the entire fleet of its front line fighter aircraft until new ejection seats could be fitted and the problems addressed. 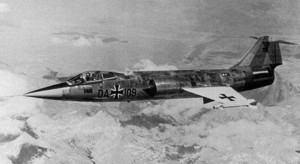 The Starfighter’s Role and Legacy in Germany

The F-104G Starfighter was a NATO-built aircraft, manufactured by no less than four European partner companies under license from Lockheed.  Originally designed as a high-altitude interceptor aircraft, the Starfighter created by the famous aeronautical engineer, Clarence “Kelly” Johnson.  The license-built examples were made by Fokker, FIAT, Messerschmidt, SABCA.  With Lockheed itself, this meant that the F-104G was produced by five independent firms and over 2,500 rolled off the assembly lines worldwide.  Germany acquired more than 1/3 of all of the F-104G Starfighters built, a total of 917 aircraft, and used them in the role of fighter and bomber — even outfitting them with nuclear weapons.

In its little discussed nuclear role, something which is often glossed over by modern Germans who seek anti-nuclear policies, the F-104G Starfighters were equipped to carry a single B-43 nuclear bomb.  This weapon had five different potential atomic yields ranging from 70 kilotons of TNT to 1 megaton of TNT (for comparison, the atomic bomb dropped on Hiroshima, Japan, had a yield of just 16 kilotons of TNT and even that was enough to destroy an entire city and kill a still uncertain number of between 90,000 and 140,000 Japanese).  The Luftwaffe’s nuclear mission involved the low altitude penetration of the East Bloc at high speed.  The aircraft would accelerate to its optimum speed of Mach 1.4.  Passing through high threat areas, it could accelerate to over Mach 2.0, making it a very difficult target.  Its small wing and needle-shape made it a truly unique aircraft with extraordinary speeds.

The B-34 nuclear bomb, standard fare for the Luftwaffe’s Starfighter squadrons. Photo Credit: US Department of Defense

If war ever came, the planes were on a “hair-trigger” alert that meant that they would all be airborne within 17 minutes of the start of a war.  Each squadron kept six aircraft on “hair-trigger alert” at all times (there were seven such squadrons) and these would be loaded with their nuclear weapons (during the Cold War’s “peacetime” periods, the weapons were held by the USAF).  Once aloft, the pilots were to make a high speed dash across Eastern Europe at low level to deliver their bombs before returning to base.  Those who returned would rearm to begin “round two” — if anything was left to bomb. 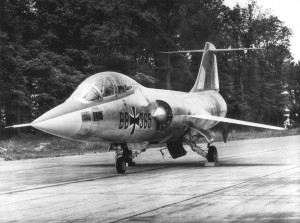 A West German Luftwaffe Lockheed F-104F Starfighter aircraft (serial BB+365), in 1960. This aircraft was lost on 19 June 1962 near Knapsack, Nordrhein-Westfalen (Germany), when four planes crashed into the ground after disorientation of the leader. All pilots, three Germans and one American, were killed. Photo Credit: US Department of Defense

The Crashes are Evaluated

After long study and debate, Germany finally had to admit that the F-104G Starfighter was not entirely to blame for the accident rates being suffered.  Indeed, other nations in NATO flying the F-104G had varying accident rates, which pointed to another cause.  As the best examples, Norway’s Starfighter fleet suffered just six losses, despite an extraordinarily high operational tempo (56,000 hours flown); and Spain’s air force suffered no losses whatsoever.  Both of these air forces featured excellent training programs and highly experienced personnel.  Further, on review, it was uncovered that the Luftwaffe’s previous aircraft, the Republic F-84 Thunderstreak had suffered from an accident rate that was approximately the same.  The causes were also identical — maintenance mistakes, pilot disorientation (particularly in weather), mid-air collisions, bird strikes and lightning strikes. 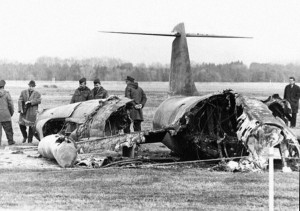 Wreckage of a crashed F-104G Starfighter.

Thus, the cause of the “Starfighter Crisis”, in the end, was largely traced to training and inexperience (except for the bird strikes and lightning).  The fact was that new Luftwaffe had grown at an extraordinary pace since its transition from the F-84s and F-86s.  The ground crews were largely still novices with the aircraft and with general maintenance tasks as a whole.  They were learning quickly but the fact was, the Starfighter was the worst case aircraft to learn on — it was, to put it simply, a maintenance hog of the first order.  Where modern aircraft require one or two hours of maintenance for every hour of flight time, the F-104G Starfighter required between 38 and 45 hours of maintenance for every hour aloft.  With so many complex systems and such tight engineering tolerances, mistakes were made and magnified by inexperienced pilots who would not properly follow procedures in emergency conditions. 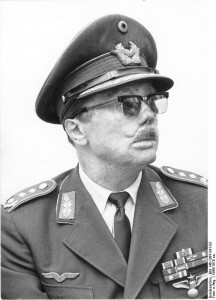 The Solution is Implemented

Armed with this information, though not a fan of the Starfighter, the Luftwaffe’s new commanding inspector general, the WWII era ace Lieutenant General Johannes Steinhoff (176 confirmed victories), ordered an extensive training program for all pilots and ground crews.  As well, to address the high percentage of pilot losses in crashes and malfunctions, he ordered the grounding of the fleet until all of the Starfighters be retrofitted with Martin-Baker GQ7A zero/zero ejection seats.

The results were almost immediate.  By 1968, the first full year that the Witnenmacher was back in service, losses plummeted by nearly 5/6ths — for every year afterward until the aircraft’s retirement from service in 1982, losses were reduced to an average of just 10 per year.  In the end, however, even this was a high number.  By the time the aircraft was retired, nearly half of all those procured had crashed.

After spending a decade in Soviet gulags, Germany’s greatest ace from World War II, Erich Hartmann (352 confirmed victories), was released and repatriated to West Germany.  He was a shell of his former athletic, trim self, but his spirit remained undimmed.  A fighter pilot above all else, he managed to pull strings to reenter the Luftwaffe within just one year of his release in 1955.  He took command of  Jagdgeschwader 71 “Richthofen”, and was soon flying Canadair Sabres (aka F-86).  By 1961, he was flying the F-104G Starfighter.  His personal plane was painted with the black tulip nose art that he had carried on his Messerschmidt Me 109s while flying against the Soviets on the Eastern Front.  As to what he thought of the new plane, the F-104G?  He considered it a terrible dogfighter (with its small wing) and a dangerous plane with poor handling characteristics.  Ultimately, his harsh criticism of the plane (and the Lockheed bribery scandal that was involved), resulted in him being forced into retirement in 1970.  The final words of General Werner Panitzki, who helped orchestrate the retirement were, “Erich is a good pilot, but not a good officer.”

Why were some West German Starfighters left in bare metal and painted with USAF markings?


Perhaps the Germans were hampered politically by limiting the number of F-104s they could buy. And perhaps that number was lower than the number needed. So perhaps they got round that limitation by paying for a larger number than allowed but pretended that a number of the F-104s purchased still belonged to the USAF.

Then again, perhaps I don’t know what I’m talking about….


All aircraft are only as good as the pilots who fly them and the mechanics who maintain them….

As a CFII, when my student gets their wings, the last thing I say to them as they go out the door:

Good Luck, Happy Landings and long and enjoyable life inflight and if you have an accident, the only thing I ask is that it’s original…


They are probably the GAF 104s that were stationed at Williams AFB in AZ where the GAF pilots were trained. That is also one of the reasons for their poor accident record. They trained in CAFB Arizona, and then flew in cloudy Germany. A recipe for disaster.


The description in the photo caption of the June 19, 1962, incident near Knapsack, West Germany, is incorrect. The accident was caused when one of the wing men badly misjudged the low-altitude tight formation turn and made contact with another aircraft, starting a chain reaction which resulted in the loss of four aircraft. This explanation was given to me by Col. Bruce Jones (USAF ret.), who related the story as told to him by Major Tom Perfili who was flying the chase plane that day and thus was the only (experienced) pilot in a position to accurately describe what happened.

Thank you for the note regarding an eye-witness report of the accident itself. The description in the article is taken from a Department of Defense document published years afterward and undoubtedly reflects the officially accepted view of what happened. While we cannot know how it was that the officially accepted accident description varies from a second hand report of an eye-witness to the accident itself, we can say that variations in descriptions of accidents are common, even sometimes at odds with one another.

Both records are important, the official DoD source and your report of the eye-witness recollection, even if through another party.

Thank you very much for posting this. It only amplifies the tenor of the story itself, which relates the number of accidents and incidents involving the F-104G Starfighter in West Germany at the time.