“Pan American Flight 214 departed San Juan, Puerto Rico at 16:10 EST for a flight to Philadelphia with an intermediate stop at Baltimore.  The aircraft, named ‘Clipper Tradewind’ arrived at Baltimore at 19:35 and took off again after refueling at 20:24.  After contacting Philadelphia Approach Control the crew elected to wait in a holding pattern along with 5 other aircraft because of extreme winds at Philadelphia.  Flight 214 entered a holding pattern west of the New Castle VOR on the 270 radial.   At 20:58 Clipper Tradewind suffered a lightning strike.”

So read the first paragraph of the Civil Aviation Board’s official accident investigation.  What type of lightning hit and happened next, however, were something extraordinary — and terrible. 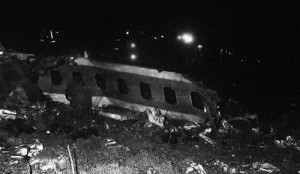 Wreckage of Pan Am Flight 214 at Elkton, Maryland.

The Crash of the Clipper Tradewinds

On this date in aviation history, a Pan Am Boeing 707 nicknamed “Clipper Tradewinds” encountered something unique in history — it was struck by not the common sort of lightning, which has a negative charge, but rather by so-called “positive lightning”.   This lightning, as the name would imply, carries a positive charge and is a rare weather event.  It can develop in the midst of a storm when the local variations in moisture and vertical shear result in the accumulation of a positive charge along a localized cloud base.  At some point, it discharges to the earth and when it does, it carries over 10 times the power of a common, negatively-charged lightning bolt.

Pan Am Flight 214 just happened to be in the wrong place at that moment, flying over Elkton, Maryland, en route to Philadelphia from Puerto Rico after a short stop in Baltimore.  The event took place on December 8, 1963 — today in aviation history.  When struck, the plane received a positive charge that no engineer had ever imagined possible.  In the blink of an eye, blue sparks flashed both outside and within the wing structure and instantly ignited the fuel vapor that lingered in the empty outer left reserve No. 1 tank, causing a catastrophic explosion that tore the wing of the aircraft right off. 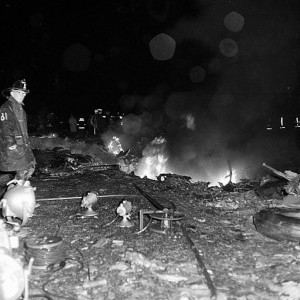 A firefighter surveys the crater and wreckage of Pan Am Flight 214 at Elkton, Maryland.

“This caused the initial ignition of flammable fuel vapours inside the left reserve fuel tank.  This triggered explosions in the centre and right reserve fuel tanks as well. Fuel spilled and caught fire; the complete left wingtip separated as a result.  The aircraft was then seen to crash in flames.  A ‘Mayday’ call was received by Philadelphia Approach as the plane was descending out of control.”

The ‘Mayday’ call referred to was:  “Mayday Mayday Mayday.  Clipper 214 out of control.  Here we go.”  As the pilots uttered those last words, the plane rolled over inverted to the left and entered a terminal, tight corkscrew dive.  Sadly, all 81 passengers and crew perished.  The event also left the aviation industry with a quandary — how to prevent such an event again in the future?  Could passengers and planes fly safely near any storm if they could be suddenly downed by a lightning strike?

Wingtip with static discharge wicks — on the left wing and winglet of an EasyJet Airbus A319-100.

In the wake of the crash, two suggestions were made — one concerned the fuel tank system and the other was offered to help dissipate electrical charge.  The latter, in the eyes of the Civil Aviation Board (and later NTSB) was the best that could be done.  After tests, it was determined that static discharge wicks should be mounted on the wing tips and tail tips.  Thus, when lightning struck, the discharge would escape through the ends of the wicks.  These wicks were actually nothing more than small cables on mounting brackets and each one served as something of a reverse lightning rod on the aircraft.

Where the lightning strikes on an airplane is rarely where the damage takes place — it is where the charge escapes off the aircraft to the ground or into nearby cloud that the damage is typically done.  With static discharge wicks, the damage might blow the tip off the wick or knock it and its mounting completely off the airplane — but hopefully nothing more.  Thus, the Federal Aviation Administration (FAA) ordered that all aircraft flying to or from and within the USA were required to employ static discharge wicks.

From the FAA’s perspective, the problem was thereby solved.  As for the other suggestion regarding the fuel tank system, the FAA declined to order any modifications that might dissipate, dilute or render fuel vapors inert within empty fuel tanks, such as by pumping in argon or another gas.  After all, how many fuel tank explosions had there been in the past?

And it all made sense, until on July 17, 1996, when TWA Flight 800 took off from John F. Kennedy International Airport….

Actually, there was another fuel tank explosion caused by lightning that happened earlier, outside of the United States.  On May 9, 1976, a Boeing 747-131F in the service with the Shah of Iran’s Air Force, with 10 crew and 7 passengers (it was a freight flight) was flying a military mission from Tehran to Madrid, Spain — ultimately en route to McGuire AFB, New Jersey. As they approached the Spanish military field of Torrejón Air Base, the crew advised ATC that they were diverting to circumvent a series of thunderheads.  As Madrid offered headings to steer around the storms, the aircraft was struck by lightning on its forward fuselage.  The discharge channeled through a static wick on the left wingtip.  However, the charge also exited at a riveted joint along a wing rib, which allowed the charge to propagate and ignite fuel vapor in the empty No. 1 tank.  The explosion caused the wing skin to separate, which induced extreme aerodynamic flutter.  The HF antenna and outer wing tip then separated from the plane, causing the entire wing to fail shortly thereafter.  Once again, there were no survivors.

How often is the average commercial airliner struck by lightning while aloft if you were to relate the number of strikes per decade on each plane?


Very interesting, but very sad story. However I doubt very much that part of the remedy to fire and explosions caused by lightning strikes was the introduction of static wicks.

The only function of static wicks is to eliminate static electricity that would, otherwise, disturb radio communications. The best proof is that they can be found in the ATA100 chapter 23 “Communications” in aircraft maintenance manuals and parts catalogues.

“Normal” lightning strikes usually hit on one side of the nose of a plane and cause “hot spots” like welding spots, generally around rivet heads. They can cause holes in the aircraft skin but most of the times they run along the fuselage over varying lengths between one meter and several meters. Then they move diagonally through the plane’s structure, to the opposite side where they leave the plane, generally at the tip of the wings, tailplane, or fin and rudder. On the way they can damage aileron and elevator hinges, and other various places.

With the introduction of composite materials, metallic sacrificial panels were added in order to provide a path for the lightning. These are quite efficient but if the lightning happens to be strong enough, damage can still be caused to the surrounding composite material, resulting mostly in delamination which will quickly deteriorate if not repaired because of moisture ingress on the ground which will freeze during flight, increasing volume, and further increasing delamination, and so on….