On this day in aviation history, on January 25, 1930, a new airline company was founded.  It was an artful creation of an investment group that rolled up 82 individual, smaller airlines under a single banner, each acquired one by one by purchase and agreement.  While these smaller companies were tiny competitors alone, once together they formed a major venture.  By 1934, they would inaugurate their first coordinates flight operations.  From that start, the airline would grow to become a truly global airline.  Fittingly, the new airline was called American Airways — and later, it would become one of the finest air transportation companies in the history of the world, American Airlines.

Looking back, it becomes clear than an airline is only as good as its people.  An airline is not a collection of airplanes, nor a group of of pilots, ground personnel or agents.  Nor is it a handful of managers who can count dollars, beans and widgets.  It is not an executive office on the top floor.  An airline may include all those things but it is also far greater — it is, above all, a shared vision with an equal mix of leadership and stewardship, held with a respect for its employees, founded on the past and holding hope for the future.  It has a plan to succeed, the people to carry it forward and the strength of character to persevere.

C. R. Smith and the Vision

Recalling back to 1934, American Airways was organized and renamed to American Air Lines.  With the launch of its flight operations, the investors selected the company’s new chief executive.  They hired a truly extraordinary leader, a man named C. R. Smith.  Like other airline leaders of that time — men like Juan Trippe, Eddie Rickenbacker, Robert Six, Jack Frye, Collett Woolman, William Patterson and William Boeing — C. R. Smith was a true visionary.  He invested in the airline’s people as much as in its equipment.

Yet 1934 was a challenging year.  Boeing’s own airline, United, had the sole rights to fly the revolutionary Boeing 247, an aircraft that was without doubt the best civilian airliner in the world at the time.  C. R. Smith countered that by turning to the Douglas Aircraft Company and asking to sponsor forward a new competitive design.  Thus, American Airways became the launch partner for its new Douglas DC-3.

C. R. Smith could see with clarity that two things stood in the way of success.  First, American Airlines needed an airplane that could make each flight cost-effective without the air mail, while concurrently maintaining affordable ticket prices; and second, he had increase demand for air travel by dispelling the widely held public perception that airplanes were a dangerous mode of travel.

New Solutions for a New Era

At American, the Douglas DC-3 paved the way.  With it’s affordable operating budgets and number of passenger seats, American became the first airline in history to turn a profit from passenger ticket sales alone.  Yet that did not address the question of how to fix low demand.  The nagging question of airline safety was what kept the public from embracing aviation.  C. R. Smith recognized that the issue could not be solved with new technical solutions, better airplanes or recounting low accident rate statistics.  Rather, he saw that each airline crash was reported in the most dramatic terms.  Front page stories carried news of each crash and loss.

While the airlines and the civil aviation authorities were working hard to improve safety, it seemed to C. R. Smith that nobody was willing to address the problem head on.  Thus, instead of remaining silent, as the others did, expecting that as the years went by safety records would improve enough that public opinion would change, C. R. Smith chose to talk about safety directly and to give speeches about flying and safety.  Most importantly, he choose to run advertising that took on the issue of safety directly and unflinchingly.  He wrote an open letter to the public — running as an advertisement.  By taking the leadership on the issue of safety, with honesty and sincerity, he pushed the public to start flying in greater numbers.

Incredibly, it worked.  With that approach, coupled with the new DC-3s, he brought American Airlines to new levels of prosperity and growth.  C. R. Smith would remain at the helm for decades, as would most of the great airline founders at his key competitors.  The airlines of that time, Pan American, United, Eastern, Continental, Delta, TWA, and others, together built the industry, expanding routes and perfecting operations and policies, growing from tiny planes to super jumbo jets, and ultimately connecting all of the nations of the world.

An Ending and a New Beginning

While the fortunes of these great companies has ebbed and flowed over the decades, some failing and others merging together, their legacy is what makes today’s commercial aviation business what it is today.  Thus, we salute American Airlines on this day, January 25, 2013, its 83rd birthday, and know that we can look ahead with hope for the company’s future.

While aviation remains as challenging as it has ever been and American Airlines faces new challenges, as much from outside as from within, we can hope that those who steer the company will pause and consider the guiding principles of C. R. Smith, who made the air carrier what it is today — one of the greatest air carriers in history.  We hope that they too will honor the principles of stewardship and that they will recall what makes an airline great is far more than the aluminum shells of its fleet and bases, its hubs and its iron.  The future has more to do with the hearts of its employees and mutual respect.  In this way American Airlines will chart its future and fly into tomorrow’s skies.

We feel that it would be incomplete to not include at least some of the words of C. R. Smith — words that he published in the 1930s as an open letter to the American people, encouraging them to fly and directly addressing their concerns about safety.  This is an excerpt from his open letter to the American people, which carried at the bottom of the page the logo of the airline and nothing more:

We know that fears keeps many people from enjoying the advantages of air transportation.  So why should we be silent on this subject?  Regrettable as it is, the records show that there have been accidents and fatalities in every form of transportation.  What we do not understand, is why some people associate danger with a transport plane more than they do with a train, a boat, a motor car or a bus.  Is it because airline accidents have received more publicity?

The fact is, there are risks involved in all kinds of travel.

It is also a fact that the air transportation industry has shown greater progress and expected a much higher standard of efficiency in a shorter span of years than any other form of transportation the world has ever known.

Why quote statistics?  They are not always conclusive.  They are often only controversial.  I could show you figures to prove that you would have to fly around the world 425 times — or make approximately 14,165 flights back and forth between New York and Chicago — before you would be liable to meet with an accident.  Do these statistics overcome your fear of flying?  I think not.

There is only one way to overcome that fear — and that is, to fly.

Such words are as valid today as they were then.  We salute the employees, management, investors and companies that make up the entire American Airlines family.  Happy Birthday.  See you in the skies! 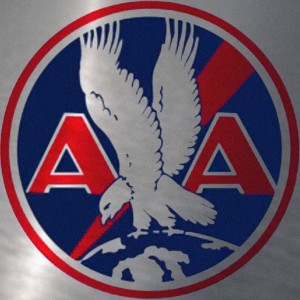 Other than C. R. Smith, the following names were listed in this story:  Juan Trippe, Eddie Rickenbacker, Robert Six, Jack Frye, Collett Woolman, William Patterson and William Boeing.  With which airlines were each associated?