The light, twin-engined bomber was called the Douglas Model 7B.  It was sleek, narrow in profile, highly maneuverable and a joy to fly.  Still, the US Army remained strangely uninterested in the design.  Further, under the Neutrality Act of 1935, foreign sales of US warplanes were restricted, though a so-called “cash and carry” provision allowed sales if the buyer paid immediately and arranged their own transport.  In January 1939, an acquisitions team arrived from France, escorted by US Department of Treasury officers in what amounted to a contravention of the spirit of the Neutrality Act.

Everything went perfectly until the demonstration flight of the Douglas Model 7B spun in and crashed while a French observer was on board.  Back in Washington, all hell broke loose on the news.  This is the unlikely story of the Douglas A-20 Havoc, one of the most successful medium bombers built in all of World War II.

Anatomy of a Crash

During the Treasury Department’s escorted visit by the French, they express great interest in the Model 7B design.  To evaluate performance first hand, they asked if one of their team, Capt. Paul Chemidlin, could fly along in the only prototype.  Douglas put one of its best test pilots, John W. “Johnny” Cable, and flight engineer, John Parks, in the plane to accompany the Frenchman and give him a show he would never forget — the flight took place at Mines Field, California (now known as LAX), today in aviation history, on January 23, 1939.

Among other maneuvers, test pilot Cable shut down one of the two engines for a low pass to show off the plane’s single engine flight capabilities.  This showed that the power from each of the two Pratt & Whitney R-1830 Twin Wasp engines was quite sufficient, and the plane performed like a fighter plane, even on just one engine!  At the end of the field, Johnny Cable pitched up to come back around for another pass — what happened next is something of a mystery, even if the devastating aftermath would be apparent. 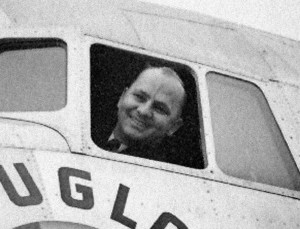 Test pilot John W. “Johnny” Cable, in the cockpit of an early Douglas DC-4, who would lose his life in the demonstration flight at Mines Field (LAX).

The best assessment we can make from available evidence is that Johnny Cable probably pitched the plane’s nose up too steeply, which caused the plane to experience an accelerated stall.  With the asymmetric thrust from the one engine running, the plane instantly did a snap roll and entered a flat spin.  The side loads on the airframe ripped the vertical stabilizer and rudder off the airframe.  On board, test pilot Johnny Cable immediately bailed out.  Pulling his ripcord at just 300 feet of altitude, there wasn’t time for his chute to open — he was killed from the fall.  Both the flight engineer and the French pilot never had a chance to escape the plane.  It impacted a parking lot and shattered, before exploding into flame.  Flight engineer John Parks was killed instantly, though the French pilot, Capt. Paul Chemidlin, survived somehow with severe injuries.

Aftermath of the Crash

News of the crash reached Washington, DC, almost immediately.  Predictably, the isolationists in the US Congress were outraged.  They had authored and supported the passage of the Neutrality Act in 1935, its extension in 1936 and its repeat passage in 1938 with amendments allowing cash buyers who arranged their own transportation to acquire some materiel.  With the crash, it was apparent that Douglas was offering an American-built warplane to a foreign power with the full support and sponsorship of both the White House and US Treasury Department!  Investigations were demanded and, on the eve of World War II, the debate served to reopen the question of America’s neutral stance.

Missouri’s Senator Bennett Champ complained bitterly, “I am interesting in ascertaining whether the French government is being permitted to obtain options on latest-design planes which have not been available to our own army.”  As well, Senator Gerald P. Nye, a noted pacifist, stated, “The aircraft deal with France… constitutes in my opinion a military alliance!”

Critically, the Model DB-7 was to compete again for an Army contract in March — with its crash, it was not able to perform in the competition that followed, though the plane was widely recognized as being the best and fastest available among the upcoming contenders! 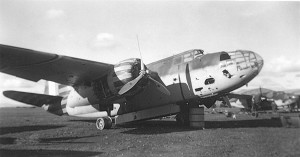 A French DB-7 in Vichy markings, a bit worse for the wear, probably North Africa, c.1944.

In March 1939, Nazi Germany occupied the rest of Czechoslovakia in a first step toward global war.  Then in September 1939, Germany and the Soviet Union attacked Poland, an act which triggered the declaration of war by the British and French.  Like dominoes, the Great Powers of Europe were falling into conflict.  France, desperate or additional warplanes, ordered two hundred of the Douglas Model 7B aircraft for immediate delivery.  Likewise, the US Army would place its first order.

Only a few of the Douglas Model 7B aircraft would arrive in French North Africa before France was defeated and occupied by Germany.  The rest were shipped to England and given to the Royal Air Force, which christened the plane as the Douglas Boston.  With the urgency of America’s rearming in the months leading up to Pearl Harbor, Douglas finally got its orders from the US Army Air Corps to build the new planes, now called the Douglas A-20 Havoc. 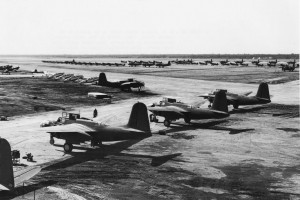 Thousands of A-20 Havocs would go on to serve with the US Army Air Force, in the 9th Air Force (Tactical), where it performed admirably.  In Britain, it would undertake a variety of roles, from daylight and night bombing to reconnaissance.  It was shipped to Australia and New Zealand and served as well with the US Army in the Pacific theater.  Even the Soviets wanted the Douglas A-20, which they found to be an excellent medium bomber — in fact, over 2/3 of the A-20B models were shipped to the USSR, mostly through Alaska and across Siberia to reach the Eastern Front and fight against the Nazis.

To the end, the plane remained an excellent performing medium bomber.  With upgrades, it soon boasted 1,600 hp engines and a higher top speed, great bomb load and other performance modifications.  In the end, however, the plane was most successful for three main reasons — it was easy to maintain and fly on missions, it was highly adaptable to and capable in all types of environments (desert, temperate climbs, Pacific islands, even extreme cold!), and last, it was a pilot’s airplane above all. 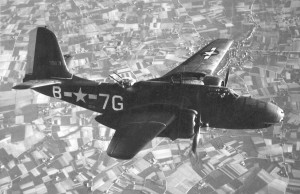 One of the Bomb Groups that flew the A-20 Havoc was the 409th BG (Medium) of the 9th Air Force.  Based initially at Little Walden, England, the group flew extensively into occupied Europe.  On D-Day itself, the 409th BG undertook missions to interdict German supplies and troops from reinforcing the beaches.  Soon after D-Day, the 409th BG (Medium) moved to France with their Douglas A-20 Havocs, leaving Little Walden forever.  In their place, the famed yellow-nosed Mustangs of the 323rd Fighter Squadron arrived and flew their escort missions over Germany from there for the rest of the war.

Fifty five years after WWII, during a visit to Little Walden in the year 2000, the staff at Historic Wings found a unique artifact from the operations building.  Along the back wall, against all odds, the Flight Operations Board still remained nearly intact, with its markings from when the 409th BG was based there.  The names of pilots, bombardiers, gunners and navigators were chalked in for missions on that very board.  Sadly, it was in grave jeopardy from advancing water damage and the staff at Historic Wings acquired and rescued it.

Today, the Flight Operations Board, the last of its kind, has been donated by us to the Imperial War Museum at Duxford, where plans are underway to put it on display in their American museum.  Historic Wings is proud to have played a part in saving a piece of history from the war and we hope that surviving members of the 409th BG (Medium) and 323rd FG will be able to visit and see the flight board someday once it is put on display.

What is the status of the control tower at Little Walden, which once saw numerous A-20 Havoc missions depart for France during the war?


Do you ever give the answers to these very interesting questions. Inquiring minds wish to know……
Jim A., Tucson, AZ


The control tower at Little Walden has been converted into a house.


Yes, the A-20 Havoc was a great airplane as it could used as a bomber or a fighter which made it attractive to the European nations.. It’s unfortunate that so few survived the war and only a handful are on display. Interestingly the Russian Navy was still flying them into the mid- 1950’s!!!

Corrections to your text: The A-20 was identified as a “Medium Bomber. In reality it was classified as a “Light Bomber”. Secondly the aircraft was never flown by the New Zealand Air Force.