Born in the Danish town of Bakkebolle, as a young man Jacob Christian Hansen-Ellehammer apprenticed as a watchmaker.  Coming of age, he taught himself a range of skills, including mechanical and electrical engineering before he launched into a new career as an inventor.  His fist successful design was a motorcycle called the “Elleham”.  It was a vast commercial success and he sold 1,000, giving him sufficient revenue to pursue other interests — those interests would primarily be the invention of the aeroplane.  Being the first in Denmark, he applied his considerable engineering talents to working out the principles of flight, largely on his own.  His first challenge was to compute just how much power was required to take off.  For this, Jacob Ellehammer turned to the one thing he could see — birds — and from that, incredibly, he was able to deduce the thrust required to fly. 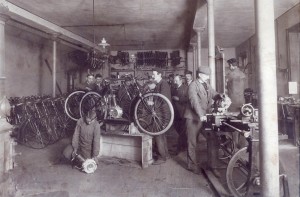 Based on careful calculations, Ellehammer developed an engine that was lightweight enough that theoretically, based on the proportions of a scaled up bird-like plan, it should have been able to lift him into the air.  As no such engine was commercially available, in a perfect demonstration of his extraordinary talents, Ellehammer simply developed one himself — it produced 9 hp and was quite revolutionary, being the world’s first radial engine (it had three cylinders).  For a wing, he experimented with kites, finally arriving at a shape that was remarkably similar to older hang glider styles during the 1980s and 1990s!  These were colloquially known as Drage, Draken, or Drachen (depending on the language of the writer when reporting Ellehammer’s progress — in other words, “Dragons”, a rather poetic term to describe an aircraft). 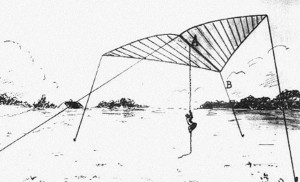 Ellehammer tests wing shapes, arriving on a basic delta shape as being efficient in the wind and able to lift his own weight. Illustrator: Unknown

From there, he developed a series of aeroplane designs with biplane delta wings and an engine affixed to the front in a tractor configuration.  On August 28, 1906, Jakob Ellehammer’s cousin Lars recorded in the logbook the first successful flight with a brief entry (in an older form of the Danish language):

Translation:  “… Tried with [Jacob] Ellehammer on board but without take off.  Changed the engine timing with more preignition.  Lifted off the ground then with Ellehammer on board we got momentarily off, making it 12 degrees [around the center pole].” 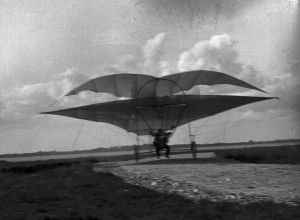 Jacob Ellehammer’s machine, one of the many photographs he took on his successful flying day, September 12, 1906. Source: Danish Technical Museum

On September 12, 1906, they were back at Lindholm trying to fly once again.  The first engine, which had produced 9 hp, was now replaced with a newer design that produced 18 hp.  Lars would record the events in his personal diary, writing:

Translation:  “… Wind at 2-3 meters per second.  Wind direction northeast.  Flew the whole way around.  Hovered with the front and rear wheels [off the ground] traveling approximately [a distance of] 42 meters, reaching an altitude of 1 ½ feet high, as it came up against the [strong] wind.  Ellehammer was on board the whole time.  I took photos of it in flight….” 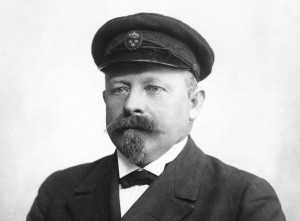 As well, Lars recorded in the flight logbook the following description of the same flight:

Translation:  “…Sailed the whole course around with Ellehammer on board, hovering momentarily with the front wheels raised approximately 18 tommer altitude above the track.  Took pictures in flight….”

For reference, “18 tommer” is an old Danish measurement, literally “thumbs”, which equates roughly to inches — so he reached an altitude of 18 inches!  Yet even there, was this really “flight” in the true sense of the word?  He may have flown in a literal sense, but he never had true control of the machine to maneuver.  He was essentially riding a dragon tethered around a center pole, hanging on hoping for the best.  While it was a huge step forward to get off the ground, without the ability to control flight direction nor do anything more than fly around a closed circular course, the utility of his invention was quite lacking. 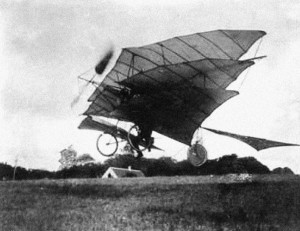 Jacob Ellehammer’s successful triplane design, with which he finally achieved longer distance flying, though it was still just many times around a pole, to which the uncontrolled plane was tethered.

Incredibly, Jacob Ellehammer made over 200 flights from 1906 to 1909 in his tethered plane, all without serious accident.  Step by step, he increased the engine power and refined the design.  On January 14, 1908, Ellehammer affixed the tether line to his newest design — a triplane winged tractor-driven aeroplane.  As before, the “dragon” would fly around a center pylon, without any controls for the pilot except the engine throttle.  The new triplane design featured a greater wing area, thus promising a farther flight.  As well, a new engine had been built — this one producing fully 36 hp.  He would fly that day a total of 175 meters.

As word reached him of others who had been more successful in controlled flight, he abandoned further development of the tethered plane and continued with other developments.  Nonetheless, hearing a German offer of 5,000 marks for the first flight in the presence of Prince Henry of Prussia, he traveled to Kiel and in June 1908, made a series of short hops.  His best was about 100 meters, a flight that lasted a total of 11 seconds, enough to win him the prize. 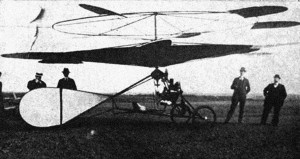 After that, he put his mind to another challenge, the first practical helicopter.  Incredibly, long before Sikorsky or the others more commonly associated with the pioneering first helicopter flights, Ellehammer’s invention flew successfully for the first time in October 1912 — but that is another story…. 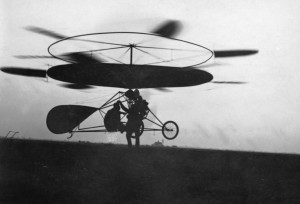 Why did Jacob Ellehammer stop developing his helicopter?


I am immensely enjoying the articles you are writing on many relatively unknown snippets of aviation history. My hat is off to whoever does your research and writes these fascinating pieces. Woody