Key Hole and the FIA

Two years ago on this day in aviation history, on January 20, 2011, the National Reconnaissance Office (NRO) launched a classified, Top Secret project into orbit atop a Delta IV rocket called the NRO L-49 (its payload known as USA-224).  While the exact purposes of the mission remain closely guarded secrets for reasons of national security, rumor and circumstantial reports has it that the rocket carried a modernized version of the venerable KH-11 reconnaissance satellite, sometimes called a KH-12, “Advanced KENNAN”, or “Ikon” — all part of the US Military’s famous Key Hole series.  If you want to imagine just what a KH-11 might look like, just think of a super-advanced version of the Hubble Space Telescope, except for one thing — while Hubble points to the stars, this one points back toward Earth. 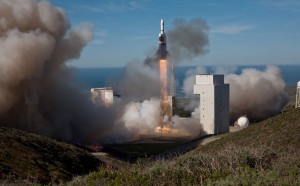 Just how good is the newest variant of the venerable KH-11/KH-12, a basic design first launched in 1976??   When asked if it could photograph the “proverbial license plate”, one “inside source” remarked offhandedly (and off the record, of course):  “That is soooo 1980 — you think we’ve been sitting around twiddling our thumbs for the past thirty years?”

The Keyhole Series and the FIA Program

Prior KH-11 reconnaissance satellites were launched in 2001 and 2005.  The older of the two had served ten years in orbit when NRO L-49 took place.  One of perhaps three KH-11s/KH-12s currently in orbit, throughout its service life, it had served admirably and had delivered the goods throughout the post-9/11 conflict period, supporting the US and its allies in the so-called Global War on Terror, in the hunt for Bin Laden and in the rolling up of terrorist networks worldwide.  In addition, it supported intelligence requirements to oversee Iran’s nuclear build-up, North Korean atomic weapons efforts and rocket tests, and a host of other unreported, classified missions. 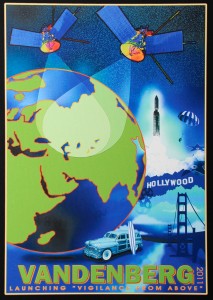 A plaque at Vandenberg AFB saluting the men and women working there who have served the US reconnaissance satellite programs for 50 years. Source: Vandenberg AFB

The follow-on to the KH-11/KH-12 system was supposed to have been the Future Imagery Architecture Program (FIA).  That program was created to develop a new generation of reconnaissance satellites and ground support systems that would be more broad-based with more numerous, smaller satellites in orbit.  Awarded to Boeing, which had outbid Lockheed by over $1 billion to win the contract, the program was beset with numerous difficulties from early on.  By 2005, major portions of it were cancelled and reassigned to Lockheed — critically, the optical portions had suffered from numerous delays and cost overruns in what the New York Times called (probably accurately), “perhaps the most spectacular and expensive failure in the 50-year history of American spy satellite projects.”

While the FIA program was reassigned and many of its problems fixed, the cost-overruns and late deliveries had left the US Military with a major problem — a potential gap in coverage starting sometime between 2010 and 2012.  The former director of the NRO, Bruce Carlson, noted that the FIA was “700 percent over in schedule and 300 percent over in budget”.  Ultimately, much of the mid-sized satellite fleet envisioned by the FIA program would be cut and cancelled and something large would have to be put into orbit to fill the upcoming gap. 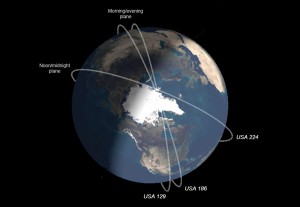 The NRO faced a difficult choice.  The newer, modern Future Imagery Architecture Program had failed to make delivery and yet the core requirement had not only not gone away — in fact, it had actually increased.  Furthermore, developing a quick fix for a next generation spy satellite is not really a feasible option since such projects would take years.  Therefore, the NRO did the next best thing and awarded a contract to Lockheed to develop a modified version of the same satellite, a new variant of the KH-11.  Two were ordered on a contract worth $6.5 billion (yes, billion, not million…).

Characteristically and with little fanfare, Lockheed delivered early and under budget — in fact, $2 billion under budget (yes, billion, not million, once again…).  When national security requirements were at stake, Lockheed had once again stepped up to the plate and delivered.  The KH-11/KH-12 project recalled the memory of the late and very great Kelly Johnson, who had always made the impossible possible and usually faster than anyone had ever thought achievable.  Some have described Lockheed’s effort in delivering the latest generation of satellite systems a “modern day Manhattan Project”.  What few realize is that is probably an understatement. 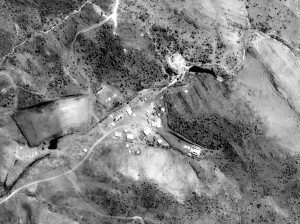 Ultimately, while we can make no statements about the true capabilities of the KH-11/KH-12 reconnaissance satellite system, we can say that whatever it is, the US Military and White House appear to be happy with the results.  While there are undoubtedly newer systems on the drawing board — and at least one new system in orbit — the KH-11/KH-12 system appears to provide a critical service within the overall, integrated system of satellite coverage.

If tradition holds, NRO has probably continued with the KH-11/KH-12  in the same way it had with its established Hexagon/Corona strategy of the past.  One system probably performs broad area, less detailed scanning while another is given missions where detailed coverage is required.  That’s a proven model, capturing the best of both worlds — finding things of interest and then, once you do, photographing them in detail. 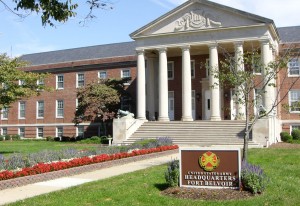 Technology is amazing and few things in aerospace history are more amazing than the history of US satellite reconnaissance systems.  Despite that, as every intelligence officer can attest, on September 10, 2001, the US could have photographed Bin Laden’s turban from above and yet had no idea what was going on in his head — nor reveal that the very next day the world would change forever when the terrorists crashed planes into New York, the Pentagon and a lonely field in Pennsylvania.

The system of intelligence gathering is often only as good as the lowest level operator on the ground, doing the grunt work of HUMINT, every day, often at great personal risk.  Satellites point the way, but to truly understand, you need people on the ground too.  To those who work in the critically important intelligence/reconnaissance missions, we can this opportunity to recognize your extraordinary dedication, bravery and service — thank you.

Imagine that… somewhere in America, there are hundreds of people working at secret locations, whose families, husbands and wives often don’t know what they do when they go to work, but whose efforts have kept the world safe and continue to do so even today.  Sounds like something out of the movies, doesn’t it?


Why don’t they save the money and use Google Earth like I do…?