On January 1, 1914 — 98 years ago today in aviation history — the world’s first airline made its maiden passenger flight.  Using a Benoist Type XIV flying boat, what was originally a single plane operation and quickly becoming a two plane show.  Its first flight carried the city’s former mayor.  Called the SPT Airboat Line (St. Petersburg-Tampa Airboat Line), it linked St. Petersburg and Tampa together for the first time, traversing Tampa Bay in a direct flight that never exceeded five feet of altitude, staying in “ground effect” so as to be able to carry the load of its single passenger.

The SPT Airboat Line was far ahead of its time, running scheduled service from day one.  Yet it could not survive more than a few months once its government subsidies ran out.  What was the result of a weird combination of business logic, geographic quirks and government sponsorship was simply not financially viable without municipal financing.  Ultimately, the curtain went down on a brilliant and innovative public-private partnership that beat the odds — and despite the challenges of its underpowered fleet of two planes, it performed near flawlessly for months and with a 100 percent safety record.

The Operator and his Equipment

The SPT Airboat Line was the dream of Thomas Benoist, manufacturer of the types of Benoist Airboats that were used in the airline.  Thomas Benoist was a visionary who often spoke of the skies being crisscrossed by “air lanes” that would carry thousands of passengers daily.  Yet his dream had only initially been one time charter passenger flights, seeking to traverse ever longer distances to prove the capabilities of his “airboats” and to demonstrate the viability of commercial air travel.  In effect, Thomas Benoist’s vision was more akin to what is today the world of charter flying and executive jets, rather than any kind of true scheduled service. 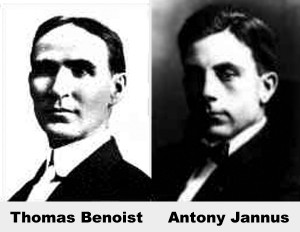 This all changed when Benoist was approached by Percival Elliot Fansler, a businessman from Jacksonville, Florida.  Fransler wrote Benoist that, “Instead of monkeying with the thing to give ‘jazz’ trips [his term for charter flights], I would start a real commercial line running from somewhere to somewhere else.”  By this, he meant a SCHEDULED daily service with advance ticket sales, taking its cue from the railroad business.  It didn’t take long for Benoist to see the validity of Fransler’s thinking.

With Fansler’s connections, the new airline was launched with the support of a contract from the St. Petersburg Board of Trade.  That contract covered 50% of costs and would endure for three months — it was essentially a subsidy and, it was hoped, once the viability of the service had been proven and the flights popularized, even without the subsidized lower ticket prices, the airline could sell sufficient trips to continue onward after the start-up period.  With the contracted subsidy, tickets could be offered for just $10 for a round trip fare (about $235 in today’s equivalent dollar value based on inflation).

Antony H. Jannus, a Benoist test pilot and instructor who had extensive experience flying passengers in the Benoist airboats, was selected to fly the operation.  A Benoist Type XIV Airboat was shipped by rail down from the factory — the airplane carrying the name, “Lark of Duluth”, a rather odd one for a Florida-based airline but one which reflected the previous flights made by Benoist company during its prior year up in Minnesota.  A second plane, christened “Florida”, was also brought in and would come online almost immediately after the first flight.

As it happened, the rail car carrying the “Lark of Duluth” was delayed and got lost in transit, but ultimately showed up late in Florida.  It finally arrived only on December 31, 1913.  As a result, the scheduled first flight on January 1 was a in jeopardy, though Benoist made efforts and the plane was rapidly assembled over the evening and night before.  By morning, it was ready for the highly anticipated events — though it would fly its first revenue passenger trip without a prior test flight.

The Airline’s Launch into History

Over 3,000 spectators turned out to see the well-publicized event.  A band struck up a lively tune and the winner of an auction for the first airline ticket was ushered into the passenger seat — it was the former mayor of St. Petersburg, Abram C. Pheil, who paid $400 for the honor of being the first paying airline passenger in history.

The engine was started and the pilot, Antony Jannus, eased the Benoist Type XIV out into the Bay for take off.  At precisely 10:00 am, he advanced the throttle, built speed with the Roberts Straight-6 engine, a 75 hp power plant, and lifted off.  Former Mayor Pheil held on and the plane rose to its best altitude of just five feet, barely enough to clear the waves of Tampa Bay.  He was lightly showered with salt spray from the waters for the next 23 minutes as the plane traversed the 21 miles that separated the two cities before he touched down in the waters of the other side and pulled up to a dock.

What made the St. Petersburg to Tampa flight a viable commercial venture in an era where airplanes boasted ranges that were easily bested by early automobiles was that the Tampa Bay was a harsh divider of the two largest cities on Florida’s west coast.  For businessmen and others wishing to visit across the Bay, a full day of travel was required to circumnavigate by land (today there is a bridge).  Likewise, crossing by boat was also typically a few hours, but translated into a half-day affair with loading and unloading.  By train, it was six hours.  By Airboat, however, it was about 25 minutes, depending on winds.  Thus, the service offered by the SPT Airboat Line was an extraordinarily opportune one.

Despite so many strong factors enabling the airline’s early success, the SPT Airboat Line was doomed from the start.  The original contract offered government backing for just three months.  This allowed the ticket prices to be brought into a range that seemed competitive and viable for business and wealthy personal travelers.  Indeed, the ticket prices were not compared against the cost of other options directly — driving around the Bay was cheaper, in fact — but rather against the cost of time.

Put simply, if one could fly across Tampa Bay in the morning in less than a half hour of travel, then attend meetings through the day and fly back that afternoon, it saved at least one and maybe even two days of travel time.  If one drove around, it took an entire day, then one would overnight in a hotel.  Afterward, the following day, somewhat fatigued, one could hold the meetings.  Finally, after another overnight in a hotel, the third day one would travel back through the entire day.  It was an arduous journey.  By rail, one could come around, hold late afternoon meetings and then return the following day — still a two day venture.  Comparing that with a short flight each way, it was obvious that the airline made brilliant business sense.

The End of the Venture and its Legacy

The insurmountable problem facing the SPT Airboat Line was the cost.  Once the subsidizing contract ended, the costs for tickets doubled to $20 round trip.  This meant that the airline was no longer cost competitive with competing options.  Within scant weeks of the end of the contract, the airline was essentially beached and without sufficient tickets being sold to fly.  The SPT Airboat Line performed a few intermittent flights and air tours but finally shut down in May 1914.  Put simply, the “cost of time” going around the Bay by car or carriage with the two hotel stays over three days, was a better option cost-wise — and, as it is today, ticket price is everything.

It would take another nearly four years for scheduled airlines to “take off” in America and overseas in Europe.  The technology of aviation — the load capacity, speed and power of airplanes — had to first reach a first threshold before it became viable to run a scheduled airline.  Principally, once more than one passenger at a time could be carried safely, the cost of the flights could be spread across multiple tickets sold, thus enabling greater profitability.  Nonetheless, those airlines that followed years after the end of the SPT Airboat Line learned a lot from the experience.  They adopted similar schedules and methods as flown by the SPT Airboat Line.  Further, every airline since has had to comply with the regulatory environment that the SPT Airboat Line forced into existence when the government realized that it had to regulate a new area of commerce.

For good or bad, this government regulatory involvement is the final legacy of the SPT Airboat Line.  Today, licensing, regulation and certification are a requirement for virtually all aspects of commercial airline operations.  In retrospect, the SPT Airboat Line did a fine job, establishing a record of safety and performance with on time flights that remains a pure and high mark for all others to follow.

Thomas Benoist was right.  Today, the sky is crossed by “air lanes” of every type.  Yet he was wrong also in one respect — it is not just thousands of passengers who travel, but rather hundreds of thousands who fly every day, all the time, all across the world.

The SPT Airboat Line launched into an entirely unregulated market space.  Up to that point, there were no legal requirements, limitations, guidelines, rules nor regulations governing the field of air commerce.  However, once the SPT Airboat Line launched, the government elected to step in.  The worry of the government officials was that others would also jump on the band wagon and that soon, many illicit and second class operations would take to the skies.  Public safety was at stake — but there was also another point to consider, which was government oversight of the air commerce industry.

Clearly, sensible regulations would be needed to license and manage the new field of commercial air carriers.  Hence, a new legal framework was quickly adopted — it didn’t take long, in fact, just weeks after the founding of the SPT Airboat Line.  Fittingly, the SPT Airboat Line applied for certification, passed all of the necessary tests and validations, and was duly licensed as the world’s first certified airline.  As well, its pilot, Antony Jannus, applied for and was awarded the first commercial pilot certification in the United States.

A little known fact is that the hull of the “Lark of Duluth” carried over 50,000 signatures from the general public on its hull during its first flight across Tampa Bay.  Why were the signatures there?

1 thought on “The SPT Airboat Line”