Today marks the anniversary of the 1944 death of one of America’s greatest aces, Lance C. “Wildcat” Wade.  This East Texan scored 23 kills against the Axis forces (Italian and German aircraft) during a four year span of combat during World War II.  “Wildcat” Wade was a consummate Texan and, prior to the war, had been a surveyor.  From this humble beginning, he rose through the ranks to command an entire wing of fighter planes in North Africa, met with President Roosevelt and was invited for an audience with the King of England.  As he put it, “…my life consisted of surveying land [from the backside] of a mule.  Now I have had tea with the King of England and his family.”  Yet few Americans know of “Wildcat” Wade and his legacy and it would take until 2005 for even Texas to recognize his heroism.  The reason for that is that he never served a day in the US Military. 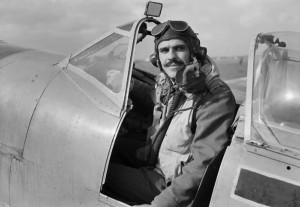 A Texan in the RAF

In the year prior to America’s entry into World War II, like many patriotic Americans who sought to combat the Nazi threat in Europe, Lance C. “Wildcat” Wade traveled to Canada in December 1940 to enlist in England’s Royal Air Force.  By September 1941, he was deployed to a front line combat unit — RAF 33 Squadron in Egypt.  At the time, the Axis powers commanded by Erwin Rommel were advancing across North Africa in an attempt to dislodge the British from Egypt, seize the Suez Canal and take a dominant position in the Mediterranean.  The British forces were stretched thin and ill-supplied. 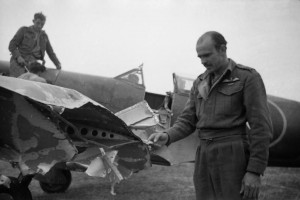 Once with 33 Squadron, part of the RAF’s Desert Air Force, “Wildcat” Wade was assigned to fly a Hurricane Mk I fighter plane.  He scored his first two kills in that aircraft against two Italian Air Force Fiat CR.42s on November 18, 1941, and was awarded a Distinguished Flying Cross.  From there, he steadily amassed kills with the passing months.  In April 1942, his squadron upgraded to Hurricane Mk II fighters, giving them a more powerful, better aircraft to combat the Luftwaffe and Italian Air Force in the desert war.  By September 1942, he had scored a total of 13 victories and was notified that he was being withdrawn to England for reassignment. 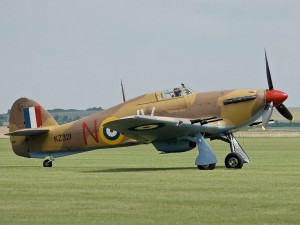 A Hawker Hurricane of the Duxford Fighter Collection, painted in the desert camouflage of the Desert Air Force. Photo Credit: Kogo

Ordered to Represent the RAF in the USA

As an ace and representative of the RAF, he was ordered next by London to travel to the United States for a series of meetings and tests of American equipment.  With his Texas drawl and straight-talking style, he was the perfect British representative for the job — moreover, as a double ace, he commanded respect wherever he went.  The fact that he was an American serving in the RAF also brought a certain cache and enabled him to make fast friends wherever he went.

While in the USA, he spent considerable time at Wright Field, reviewing the latest American fighter and bomber designs and considering whether they would be a good match for the RAF’s war effort.  Many new aircraft were being tested there, most of which wouldn’t make the front until 1945, given the delays in operational testing and approval prior to entering production.  Further, he was invited to the White House and met with President Franklin Delano Roosevelt.

With the end of his tour in the USA, he returned to Britain and was reassigned to North Africa to take command of a fighter unit, RAF 145 Squadron.  It was a fitting assignment given the international character of the squadron, which included Australians, New Zealanders, Canadians, South Africans and even Argentinians.  In early March 1943, he arrived to take command and begin flying the  Supermarine Spitfire F. Vb fighter plane.  Simultaneously, a new flight, “C Flight” was added to RAF 145 Squadron — these were the Poles, veteran killers from previous campaigns, a unit known as “Skalski’s Circus”. 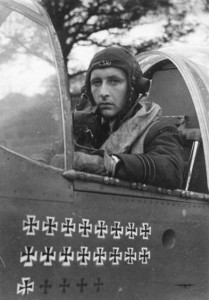 Stanislaw Skalski, former leader of “C Flight” of “Wildcat” Wade’s RAF 145 Squadron, the Polish Fighting Team — as shown near the end of his time in the RAF, in the cockpit of his Mustang III. Source: RAF

Promoted to Squadron Leader, “Wildcat” Wade was soon back in combat and over the next two months shot down an additional eight enemy aircraft.  During that first month, RAF 145 Squadron operated from Bu Ghara, 150 miles west of Tripoli.  From there, they shot down fully a third of all the planes claimed by the RAF in the Mediterranean Theater of Operations.  During this time, the squadron upgraded to the more powerful and better armored Supermarine Spitfire F. IXc, providing a further edge against the ever-advancing quality of the Luftwaffe’s fighter arm.

On April 11, 1943, the unit moved to La Fauconnerie and then four days later to Goubrine.  They were chasing the Luftwaffe across Libya.  On May 6, 1943, they had move ahead again, this time to Hergla.  Two weeks later, on May 20, 1943, they moved to Ben Gardane.  From there, the next stop would take them north across the Mediterranean Sea — in this short time, from March to May 1943, under S/L “Wildcat” Wade’s command, RAF 145 Squadron scored 25 kills, 3 probables and 9 damaged. 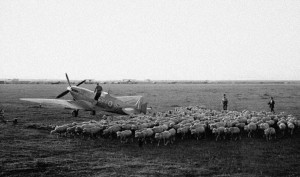 “Wildcat” Wade’s Spitfire in Italy at the airfield, a flock of sheep being herded behind the aircraft.

With the invasion of Italy, RAF 145 Squadron began flight operations from there.  S/L “Wildcat” Wade took up an older Supermarine Spitfire Mk VII and engaged and shot down two Focke Wulf Fw 190s on October 2, 1943 — both of Schlachtgeschwader 4.  While SG4 had been assigned to try to curb Allied air dominance in Italy, instead the opposite was happening as RAF 145 Squadron continued to rack up kills on an unequal basis.  A month later, on November 3, 1943, S/L “Wildcat” Wade shot down another three Fw 190s from the same German unit.  Such devastating losses on the German side were unsustainable. 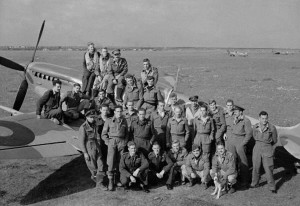 Pilots of RAF 145 Squadron for a farewell photograph at the time S/L “Wildcat” Wade was promoted and reassigned to headquarters.

With shared victories and lone kills, by the end of 1943 S/L “Wildcat” Wade’s personal score had risen to 23 aircraft.  He was awarded a bar to his DFC and was promoted yet again — this time to Wing Commander, the highest rank achieved by an American during the war.  This meant, however, that he would report to the Headquarters Staff in Italy instead of flying combat.  Turning over command of RAF 145 Squadron to another American (another who for most American aviation buffs is an unknown figure).  The new commander was the RAF ace from Ironwood, Michigan, S/L Oliver C. Kallio.  Then “Wildcat” Wade reported to headquarters to fly a desk. 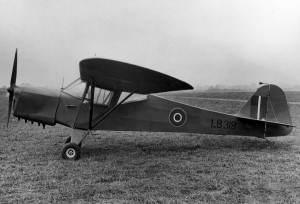 An RAF Auster III, perhaps the last plane flown by W/C “Wildcat” Wade before his untimely death (though others report he was in a Spitfire at the time). Source: RAF

Even if he was now a headquarters officer, as an RAF pilot he was expected to continue to fly training missions and stay current and combat ready.  Sadly, on January 12, 1944, “Wildcat” Wade was killed during a training flight.  Many historians report that at the time he was flying a Taylorcraft Aeroplanes (England) Limited Auster III, however, this may not be true.  Of note, Eric Young of the 145 Squadron Association, confirms that Lance Wade lost his life not in an Auster but rather in a Supermarine Spitfire Mk 5, JK 603, during a short flight in which the wingtip hit the ground, resulting in a devastating crash.

Today, “Wildcat” Wade, the son of East Texas, is rarely listed among the ranks of top American aces.  Unlike many others who served in the RAF’s Eagle Squadron and elsewhere who were drafted into the USAAF, “Wildcat” Wade took the chance and remained in the RAF.  This was no small matter as many Americans reported that they had been issued ultimatums by the US Army to either join the US Military or face prosecution.  Many of America’s leading aces of World War II in the USAAF were of such stock — famously they filled out the senior ranks of the famed 4th Fighter Group in England. 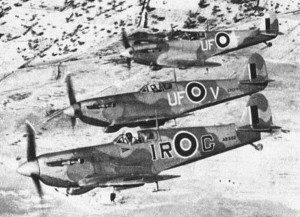 Three Spitfires flying over the desert in North Africa.

Yet, even if he would have fit in perfectly at Debden with the 4th FG, “Wildcat” Wade did not heed that call.  Instead, he remained with the RAF to his last days.  He served the highest ideals, fighting for freedom and liberty in a battle against the Nazi onslaught.  His decision also brought more danger — but also more opportunities for combat.  American pilots in the USAAF were sent stateside after 25 or 50 missions.  By staying with RAF, “Wildcat” Wade instead flew as the other British pilots until he was either wounded or killed.  And thus, instead of serving a half year in combat as was common for Americans, he flew in the RAF for more than four years.  Of that, about half was in combat squadrons in battle.

In Texas, his name was finally brought to the fore and officially recognized on March 23, 2005, when the Texas State Legislature passed H.R. 555, honoring Lance Cleo “Wildcat” Wade.  The bill declares him to be an “American hero” and states, “…he lived a fulfilling  life, dedicated to patriotism and freedom; this distinguished  fighter ace represented the essential relationship between Britain  and the United States during World War II.”  It was an honor long overdue. 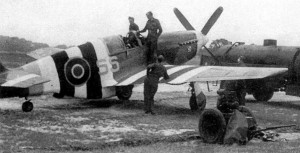 Wing Commander Stanis?aw Skalski’s Mustang III, in which he flew as commander of No. 133 (Polish) Wing.

“Skalski’s Circus”, the Polish Fighting Team that was assigned as “C Flight” within RAF 145 Squadron, arrived in North Africa on March 13, 1943.  The unit was carefully assembled from only the most experienced, deadly Polish fighter pilots who had flown in defense of Britain during the previous two years.  Of the 70 who applied, only 15 were ultimately selected and deployed.  The unit entered into its first combat on March 18 and, with the end of the North Africa campaign on May 3, it was disbanded.  In that one and half months, this small unit scored most of the kills confirmed in RAF 145 Squadron.

Two of the fifteen men in the Polish Fighting Team went on to command RAF squadrons — S/Ldr Eugeniusz Horbaczewsk commanded RAF 43 Squadron and F/Lt Stanislaw Skalski, the leader of Polish Fighting Team, went on to command RAF 601 (County of London) Squadron and then No. 133 Polish Fighter Wing, which flew the American-made North American Mustang Mk III (the export version of the P-51B Mustang).  By the end of the war, F/Lt. Stanislaw Skalski counted his kills as being 22 11/12ths (yes, all but 1/12th of the credit short of 23), the highest scoring Polish fighter pilot of the war.

“Skalski’s Circus” was but one of many RAF units that were dominated by Polish flyers from the time of the Battle of Britain to the end of the war.  The Poles were well-known as being particularly ruthless and deadly flyers — why was that?  What made them so ruthless?


They were poles apart because they were avenging the Nazi brutality after Poland was occupied, something that neither England, America nor Australia suffered.

Does your father’s photo name Steve Woods? If so, could you tell me where he is on the photo? I have recently written an article for the 33 Squadron Association newsletter about Steve and his younger brother Eric ‘Chico’ Woods, both served with 33, as did Lance Wade and Oliver Kallio. Unfortunately, even if Eric survived Greece and Crete, he was shot down shortly after the 33 Sqn reformed in Egypt.