It all started in Finland on February 26, 1946 — today in aviation history — when several Finnish citizens looked up into the sky during the short winter day and there, startling as it sounds, they saw what they described as some sort of a rocket flying by.  Perhaps what had been seen was a modification of a captured Nazi V-1 “Buzz Bomb”.  The Americans, French, English and others in the Western Alliance knew only one thing — they hadn’t launched it.  Their best guess was that it was a Soviet rocket test.  In the months that followed, an increasing number of sightings were reported from across Finland and Sweden, then expanding into Denmark and Norway — and it was not just a few rockets, but hundreds.  Ultimately, over 2,000 rocket sightings would be reported from across Scandinavia before, by the late 1940s, they ceased almost completely.

This is the story of the “Ghost Rockets” of 1946 and 1947.  To this day, however, nobody knows just what they were.  Theories abound claiming everything from early Cold War rocket tests to alien invasions — but who knows?  And will we ever know just what began on a cold winter day in Finland all those years ago? 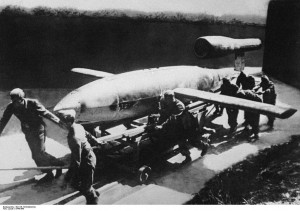 The Beginnings of the Cold War

On February 9, 1946, Soviet Premier Josef Stalin surprised the world with a sharply worded speech aimed at Washington and London.  World War II had only ended less than a year earlier and the Western Allies had high hopes that the “Great Powers” could work together and build a new world with the Soviets, based on peace and friendship.  In his speech, however, Stalin claimed that communism and capitalism were enemies and could never coexist.  He issued a startling declaration — the Soviet Union would prepare for “any eventuality” with the West and, to support that, the Soviet Union had embarked on a five year plan designed to prepare for war.  In Washington, the speech was greeted with concern, one senior analyst calling it nothing less than a “Declaration of World War III”.  In later years, the speech would be considered the opening salvo of the war of words that would soon mushroom into the Cold War. 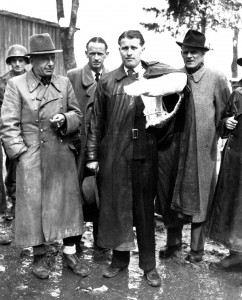 One day after making it across the front lines to US Army forces in Germany, some of the German scientists. Pictured are (from left) a U.S. soldier, Walter Dornberger, Herbert Axter, Wernher von Braun, Hans Lindenberg, and Bernhard Tessmann (partially cropped) after the scientists surrendered to the Allies on May 2, 1945.

Less than two weeks after Stalin’s inflammatory speech, on February 21, 1946, Wernher von Braun and over 100 former Nazi scientists arrived at Ft. Bliss, Texas, as part of the secret program called “Operation Paperclip”.  The project was aimed at cataloging and carrying forward the most advanced rocketry sciences of the Nazi war machine.  The former Nazi scientists, many of whom were directly responsible for the development of the V-1 and V-2 terror weapons, were given immunity from any prosecution of their past actions.  In trade, they agreed to support America’s new rocketry programs.  Ultimately, these efforts would result in America’s space programs and putting astronauts on the Moon.

In 1946, however, it appeared that the space race was already beginning as the Soviets too had captured other Nazi scientists — not the best from the research programs at Peenemünde, but nonetheless, some rather good ones.  Further, Peenemünde itself was now under Soviet control.  The Americans and British wanted to know:  were the Russians testing V-1 and V-2 rockets from there, firing them across the Baltic over Scandinavia? 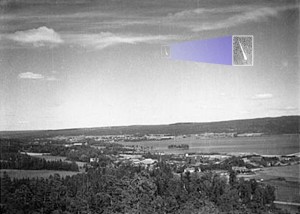 One of the only photographs of a reported Ghost Rocket, taken by Erik and Åsa Reuterswärd while on vacation at Guldsmedshyttan, northwest of Lindesbert in Västmanland, Sweden, on July 9, 1946. An inset box shows a close-up of the reported object which looks quite a bit like a daytime meteor sighting — others claim it looks somewhat like a V-2 during its rocket burn.

What followed was a headlong rush to evaluate the rash of strange sightings over Sweden and Finland.  Meanwhile, the press settled on the term “Ghost Rockets” to describe the sightings, though just as quickly the Swedish government issued orders that all data about trajectories, locations and timings be stripped from news reports.  This was a move designed to ensure that if the Soviets were testing rockets they could not gain any information on any rockets that might have gone astray.  The Ghost Rockets were allowed to crash deep in the inland forests of Sweden’s and Finland’s north and recovery teams were sent out to bring back pieces.

To all military observers and intelligence services, the view evolved that the Ghost Rockets were confirmation that the Russians were making early and very fast strides in rocketry.  Soon American teams were dispatched to Sweden to discuss the matter with the Swedish military — Jimmy Doolittle himself came, though in the guise of a civilian working with Shell Oil; once in Sweden, he undertook a series of secret meetings about the Ghost Rocket issue.  The Swedes were cooperative and interested in expanding ties with the Americans and British, with whom cooperation had been established during the last two years of World War II.  At that earlier time, the Swedes had allowed a secret British-manned radar and listening posts to be established on the island of Öland to track German aircraft, though even today this is not common knowledge. 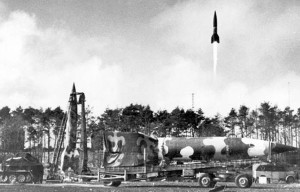 V-2 Rockets launching from the facility at Pennemünde.

Soon, the Swedish government was tracking the Ghost Rocket sightings with great care, logging and investigating each soon after reports were received.  The news carried many bulletins about sightings and the public was growing concerned with the potential of a new threat emerging from the East Bloc.  Although Sweden claimed neutrality, in fact, it was working its way toward a quiet alliance with the West, one that would emerge and strengthen over the following decades even if Sweden remained outside of NATO.

In the eyes of many observers, it appeared that many, if not most of the roughly 2,000 Ghost Rockets sightings that took place over the next year were actually meteors.  Notably, the sightings peaked during the Perseid meteor showers that summer, which seemed fairly strong evidence.  Nonetheless, there were perhaps 200 sightings that defied explanation, including some that were carefully documented by pilots and military observers and others that were also tracked on radar and verified to be man made.  When the trajectories were plotted, they pointed back generally toward Peenemünde, giving rise to the thought that the Russians had restarted test launches from there.  Other intelligence assets, however, confirmed that Peenemünde remained in ruins — so just where were the Soviet rockets coming from?  Perhaps from Poland, where the Nazis had also launched some V-1s?

Reports in the Swedish newspapers continued unabated.  Some included startling details, such as this one from June 1, 1946, drawn from the pages of Morgon-Tidningen, as translated below:

“It seems as if the mysterious flier, which was observed in Osternarke at the beginning of the week, was not altogether an illusion.  In fact, yesterday the same thing was reported in Katrineholm.  It was an object that appeared like a silver-glistening rocket in the shape of a giant cigar, and it was noticed in the east along the horizon.  The time was 11:43 am in the morning.  The ‘ghost airplane’ had no hint of wings, but on the other hand, some thought it that had some semblance of a stabilizer on the tail.  It traveled very rapidly through the air and many observers pointed out that not even the fastest fighter plane would have been able to fly alongside.  A light rumble was heard near the object after it had made a turn toward the west before it continued its trip away from the area, then diving toward the south….  The projectile, or whatever it might be, was as long as a common training plane and flew at 300 meters of altitude….” 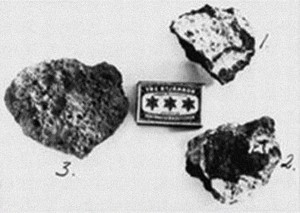 Reputed fragments from the Njurunda beach rocket sighting, placed alongside a Swedish matchbox for size reference.

In the midst of the summer months of 1946, Swedish investigations turned up reported pieces of crashed rockets.  These were analyzed carefully in labs.  Most were identified as man made objects.  Concurrently, some official sources began to believe the Ghost Rockets as evidence of extra-terrestrial visits (the 1947 Roswell Flying Saucer being a timely event in this context).  Descriptions of the rockets ranged from flaming balls to cigar-shaped objects with flashing lights that spewed long tails of sparks.  Others were reported as objects that flew at low altitudes and low speeds — perhaps 150 mph — some even had wings or rocket-like tails.

Many reports supported the conclusion that these were probably Soviet-built variants of captured V-1 Buzz Bombs.  The evidence was far from conclusive, however, and one official US analysis even suspected alien invasion, after which another meeting was held with the Swedes to caution them to silence since none of the nations on Earth had any way to stop such “advanced technology”!

Subsequent scientific analysis provided no extra-terrestrial information nor suggested any other-worldly sources for the debris found.  When a crash of one object struck a beach just twenty meters from some Swedish sunbathers at Njurunda, three pieces were recovered from the small crater.  Later analysis, however, proved them to be little more than charcoal from a beach barbeque!  Yet something had hit the beach at Njurunda even if somehow there was no physical evidence left behind.  It was just weird. 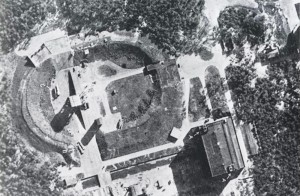 The first sighting by the Allies of the V-2 threat during WWII — a reconnaissance photo provided by No. 540 Squadron RAF on June 23, 1943. Flight Sergeant E. P. H. Peek in a de Havilland Mosquito PR4 overflew Peenemünde. Visible are a pair of low-loader vehicles holding a pair of rockets. Photo Credit: Royal Air Force

Ultimately, Western intelligence and defense agencies concluded that the Soviets had to be behind the Ghost Rocket sightings.  Numerous programs were undertaken to track the Soviet rocket programs and to get better data on the sightings.  Though some made claim to alien spacecraft, very few ascribed to that view.  Satisfied with the explanation of Soviet rocketry, the Defense Department was pleased that it could gain support for new budgets that were justified as counter-measures to Soviet advances (a rather convenient thing in the early Cold War era).  With the end of the rash of sightings, the Ghost Rockets matter was largely closed in 1947 and 1948.

Finally, in the early 1990s, after the fall of the Soviet Union, it became apparent that whatever the Ghost Rockets were, they certainly weren’t of Soviet origin.  As of 1947, Soviet tests of German rocketry technology were still in their infancy — certainly, there weren’t 200 or more rocket launches from the Baltic coast.  Thus, to this day, there is no reasonable explanation for the sightings of the Ghost Rockets, nor any explanation as to why, if they were just meteorites, the sightings somehow ended just as suddenly as they had started.

Maybe they were alien space probes after all — or not….  Ha!

In 2012, a documentary team from UFO Sverige went to one of the most famous locations from the Ghost Rockets era, a lake in Sweden where witnessed described the “landing” of a Ghost Rocket. Using sidescan SONAR they combed the bottom of the lake for debris — while they didn’t recover any artifacts (yet), unexpectedly they did map a crater in the bottom of the lake. Something happened there…. But seriously, extra-terrestrial?

When did the Soviet Union make its first success rocket launch after World War II and what type of rocket was launched?