One hundred years ago this week, Flight published its Foreign Aviation News report.  The news spanned the globe, ranging from China and Japan to close by in France and Germany.  Beyond the usual reports about pilots achieving their brevets, there were many interesting tidbits.  The high points, as with all such reports, concerned the men (and women) who flew aeroplanes that today would be considered rare and historic — then, they were the best available, each hand built to the best of the manufacturers growing abiities.  All in all, 100 years ago this week was an interesting time!

The Headlines and Stories

The following are the best stories drawn from those that ran in the current week’s issue, one hundred years ago today: 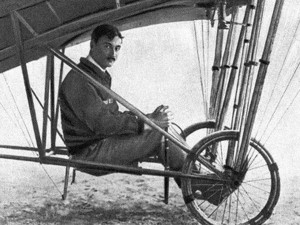 Roland Garros in a Demoiselle.

High Flying at Nice.
ON the 11th inst., Garros treated the spectators on the Promenade des Anglais at Nice to some of his very acrobatic flying.  In one of his ascents he went up 3,100 metres in 15 minutes, and then made a very swift dive to within a short distance of the ground.

Rhone Motors Doing Well.
GlLBERT AND MOUTHIER on their Moranes, and Letort on his Farman have each been making splendid flights at Lyon and Amberieu.  All the machines are fitted with Rhone motors.  On the 14th, Gilbert went up 4,000 metres in 14 mins., while Letort took passengers above the Alps.

Caudrons for Chinese Army.
A NUMBER of the Caudron biplanes built to the order of the Chinese Government, were tested at Issy on the 13th inst., and the Chinese officials present expressed their satisfaction at the excellent performances of the machines.

Fine Work on Deperdussins.
AT the Deperdussin aerodrome near Rheims, Lieuts. Ragon and Adrian, and Sergt. Mavinkowitch each made a flight of an hour and a-half on the 12th inst., and Lieuts. Redelsperger and Devienne, and Capt. Fabre flew from Rheims to Mailty Camp, Vouziers, and back, and from Rheims to Amiens. 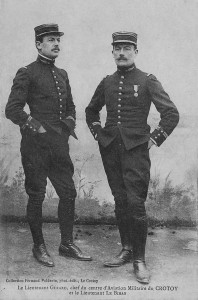 Lieutenants Gerard and Le Bihan at Crotoy in 1913 in full military uniform.

Caudron Biplanes at Boulogne.
LIEUTS. GERARD AND LEBIHAN and Sapper Jacquemart went from Crotoy to Boulogne on the 12th inst.  One of the machines was a hydravion, arranged for alighting on water or land.  It came down on the water several times before finally landing on the beach alongside the other two machines. The two officers returned to Crotoy the next day, while the Sapper went back on the 14th inst.

A Japanese Mission at Rheims.
ON Saturday, a number of Japanese Government officials paid a visit to the Deperdussin aerodrome at Betheny, near Rheims, and spent a long time studying the works there.  They also saw some very fine flying by Capt. Aubry on a two-seater Deperdussin. 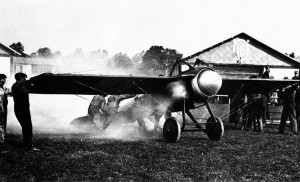 A Deperdussin Racing Monoplane in 1913.

Though the issue included numerous other tidbits about airships and military news, as well as detailed reports from each of the flying grounds around England, we have not passed those on.  The photographs used in this story are drawn from historic sources, including from other issues of Flight.  As a whole, such stories truly capture the flavor of that time, long ago — and as I’ve always said, they really make me glad that I fly in the modern era, even if a Cessna really can’t hope to look as cool as Blériot or Deperdussin racer after all.