On March 10, 1956 — today in aviation history — the Department of Defense authorized the following information release:

March 10, 1956/B-47/ Mediterranean Sea
The aircraft was one of a flight of four scheduled for non-stop deployment from MacDill AFB to an overseas air base.  Take-off from MacDill and first refueling were normal.  The second refueling point was over the Mediterranean Sea.  In preparation for this, the flight penetrated solid cloud formation to descend to the refueling level of 14,000 feet.  Base of the clouds was 14,500 feet and visibility was poor.  The aircraft, carrying two nuclear capsules in carrying cases never made contact with the tanker.  An extensive search failed to locate any traces of the missing aircraft or crew.

The terms were terse, concise and did little to conceal the start reality that two caches of nuclear grade, weaponized bomb material, outside of their bomb casings, had disappeared. It constituted a dangerous turn of events, referred to in Strategic Air Command parlance as a “Broken Arrow”.  What followed in the days and weeks after the loss, however, was even more frightening.

In fact, it may have consequences that  reach nearly 50 years through history to today. 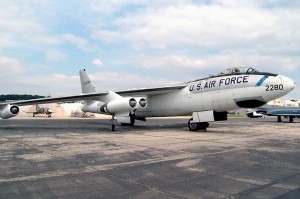 A Boeing B-47E, the same type as lost in the Broken Arrow incident, in storage at the National Museum of the United States Air Force. Photo Credit: USAF Museum

In 1956, the Strategic Air Command’s 305th and 306th Bombardment Wings were based at MacDill AFB, Tampa, Florida.  Both were equipped with nuclear-capable B-47 Stratojet medium bombers.  Missions were varied but were designed to ensure that the USAF provided continuous deterrence and pressure on the Soviet Union in the early years of the Cold War.  To accomplish these missions, the SAC crews regularly deployed around the world, often basing from allies of the West that ringed the borders of the USSR.

On March 10, 1956, four B-47 Stratojets of the 369th Bomb Squadron took off from MacDill AFB en route to Ben Guerir AB, located just north of Marrakesh, Morocco.  For the previous three years, B-47s had flown similar missions, crossing the Atlantic at high speeds.  In one case, a B-47 set a record crossing that averaged 575 mph over a distance of 3,120 miles, completing the mission in just 5 hours and 22 minutes after aerial refueling several times.  The B-47 Stratojet gave SAC the ability to penetrate Soviet airspace at high speed and reach targets anywhere on the planet. 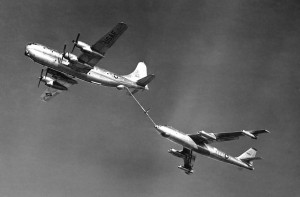 A Boeing B-47 Stratojet being refueled by Boeing KC-97. Photo Credit: USAF

Crossing the Atlantic, the four B-47s rendezvous’ed with a KC-97 Stratotanker flying from a temporary duty station in the Azores.  This was their first aerial refueling.  They took on 35,000 lbs of fuel each before continuing on their way toward Morocco.  A few hours later, they arrived over the Mediterranean and descended for their next refueling.  A solid deck of clouds stretched below, though weather reports noted that the ceiling was 14,500 feet.  The tanker was waiting for the aircraft at 14,000 feet so they could undertake the refueling in clear weather.  What happened next defies explanation — just three of the four B-47s emerged from the clouds.  The fourth was simply missing.

The Search and an Evaluation

The missing plane was a Boeing B-47E-95-BW Stratojet carrying serial number 52-534.  The three man flight crew consisted of Captain Robert H. Hodgin (age 31, Aircraft Commander), Captain Gordon M. Insley (age 32, Observer), and 2nd Lt. Ronald L. Kurtz (age 22, Copilot).  In the belly of the aircraft were two capsules carrying bomb-ready nuclear weapons material — these were an essential part of the deployment to Ben Guerir AB, since there were no permanently stored nuclear weapons kept there.  Since the nuclear weapons materiel was in carrying capsules, a nuclear detonation was impossible, but nonetheless, any such loss constituted a serious matter. 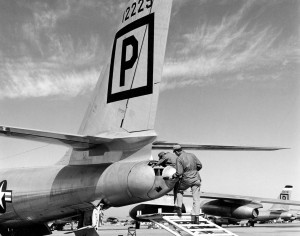 Moreover, the disappearance of the aircraft also meant that the three man flight crew was also missing and quite possibly in need of assistance.  Had they bailed out?  Had the plane crashed into the water or exploded in midair?  No radio communication or declaration of an emergency had been transmitted.  Why?  As these questions and more circulated, a large scale search and rescue operation began.  USAF search teams were dispatched.  British Naval assets undertaking military exercises were diverted to the search as well.  Finally, French and Moroccan ground troops in the desert undertook a focused search for any sign of the plane on land.

The most promising reports were from eyewitnesses who stated that the bomber was seen to explode in midair over the desert to the southeast of Port Say, a small village along the Algerian coast near the Moroccan border.  That location corresponded with the rough position of where the planes were to have done their aerial refueling.  Searchers, however, could not locate any wreckage.  In the end, nothing was found — not then, nor since — and the search was abandoned, leaving two capsules of nuclear weapons grade material unaccounted for and at risk. 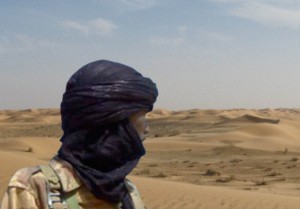 Today, insurgents travel throughout the region, though in recent months, they have been under serious attack from regional coalition partners and the French military.

While the story of the B-47 “Broken Arrow” (what the USAF calls the loss of a nuclear weapon or weapons materiel) has been mostly forgotten, it implies a dangerous reality.  The region where the plane may have crashed is sparsely populated and, in recent months, has become the home of transnational terrorist groups, commonly lumped together under the informal title of AQIM (Al Qaeda in the Islamic Maghreb).  Were one of these groups to “get lucky” and find the nuclear materiel, likely still safely secured within their SAC capsules and radiation shielded for easy transportation, they would have the makings of a “dirty bomb” at the very least.  Even fifty years later, the nuclear grade materiel one would find within would not have decayed to any significant degree.

Where once the loss of the plane and crew were a matter of serious interest within SAC, today, this piece of history brings a dark and dangerous new dimension to the conflicts in Mali and around the region between insurgents and the established governments of the region, with the backing of the West.  A Broken Arrow — what should be just another footnote from the pages of the Cold War — remains a matter of concern, even to this day.

The loss of the B-47E 52-534 is not the only “Broken Arrow” event in the course of SAC’s history of the Cold War.  Did the Soviets ever suffer from the loss of a nuclear weapon as well, a sort of “Red Star Broken Arrow” event?  If so, where and how?


Interesting article. Maybe a more sophisticated search needs to be performed. That is what I do – look for WWII era aircraft for recovery and restoration.


I wonder, why haven’t our sophisticated satellites of today been used to locate these, along with Special Ops.???


I flew the recon version out of Lockbourne (91st SRW) for six years in the ’50s. Reflexed to Morocco three times with few if any problems, thank the Lord!!! I still proudly wear my thousand hour pin on my lapel.

Years later while at George AFB, I was their Broken Arrow response coordinator. Reflecting on my 28 year career, I must say that my time in the RB-47 was the most challenging and rewarding experience of all. What would we have done without the Cold War!!!


Broken Arrow, Dull Sword, Bent Spear — even after all this time since I left SAC and my former role as a trained killer, today when I hear those words I think, “Oh,sh*t”. I’d bet you that SAC recovered them and just never published it. Even if they didn’t, after 50 years I would not want to get near the area unless I had a radiation suit that I trusted.


A B-47 is slightly larger and much heavier than a 727. As such, the wreckage should not be hard to locate.

The question is what happened? There was NO visible wreckage?

There were three other B-47s and a KC-97 RIGHT THERE and yet nobody found ANYTHING?


My question are: Why would a plane flying from Florida to Morocco pass over the Mediterranean Sea? It should have flew directly from over the Atlantic to the Airfield in Morocco. If it was near Morocco why did they not refuel a couple hours earlier instead of when they were right over Morocco? This makes no sense whatsoever to me.


I served in the 56th Air Rescue Squadron at Sidi Slimane AFB, French Morocco in 1956 and our squadron was in charge of the search mission looking for that B-47. I worked in ground maintinance repairing the radar and radio systems on the aircraft. Our planes were in the air for every once of daylight every day, and our entire ground crew practically lived down on the flightline for two solid weeks. At one point we had over 200 planes, including commercial and private plans, as well as ships at sea covering search grids, looking for any kind of debris, as well as the French and Moroccan troops doing ground searches in the desert and mountains. When a plane hits the water there is always debris or oil slicks in the water, even if there is an explosion in the air. And of course there is always debris on land as well. That was the longest search mission we had in the 13 month I was there.


I wonder what the coordinates are for this site. Does anyone know? Like the Air Force response man on a BA said, “I too would not want to go near that area without a team with highly sensitive radiation equipment.”

This is or could be a really bad scene to approach.


I’m guessing this article is not the wake-up-call about the lost nuclear material. Assuming they did not secretly recover it – I recall them saying about a similar loss that the material becomes worthless over time with saltwater corrosion.