These brief notes were entered into the log of a man who had dreamed of rocket flights into space since he was a boy.  Unassuming, the notes reflected a major scientific breakthrough as Robert Goddard’s first successful rocket launch had taken place — though it had been in private and without public funding.  Goddard’s rockets, in fact, were pursued despite the open ridicule of the public and the media — that crazy man thinks he can launch rockets into outer space!  Still, he persevered, expanding his knowledge by experiment and patenting his findings.

His dream of spaceflight wasn’t born of an education at a higher university (though he did research at Princeton), but as a young boy who had climbed a cherry tree behind the barn at the home of some friends.  His job that day was to prune a few dead branches — instead, his imagination inspired a revolution that would consume his life.  From that innocent boy’s dream, every space program in today’s world was born that day. 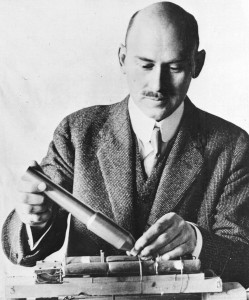 Robert Goddard was just 17 years old when he took his hand-built ladder and placed it against the side of the cherry tree in Worcester, Massachusetts.  The date was October 19, 1899, and his only task was to trim off some dead branches on the farm of a family friend.  Goddard had always been a dreamer and experimenter, entranced by the possibilities of science.  His imagination had been fired three years earlier by the ideas of H. G. Wells and the book, War of the Worlds.  From then on, where others thought it mere fiction, he could imagine space travel.

But imagining it was not enough.  That day in October, when he climbed the cherry tree and began sawing on the dead branches, he looked up into the blue sky and suddenly was hit with a flash of inspiration:

“It was one of the quiet, colorful afternoons of sheer beauty which we have in October in New England, and as I looked toward the fields at the east, I imagined how wonderful it would be to make some device which had even the possibility of ascending to Mars, and how it would look on a small scale, if sent up from the meadow at my feet.”

Rather than simply dreaming of space travel, Goddard had made the intellectual leap to seriously imagine what types of rockets and what science would be required to achieve his goal.  Yet Goddard learned early on to keep such dreams to himself.  Overly thin and not very strong, he was often sickly.  He was running two years behind the other youths in education at his high school.  Nonetheless, he was a good student.  On the power of his personality became popular enough to be elected class president twice.  Still, his dreams of space flight were the butt of jokes.  He was left to experiment and think in silence. 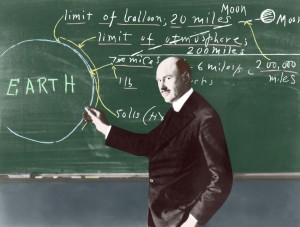 Colorized image of Dr. Goddard at a Clark University chalkboard in 1924. Source: NASA

Carrying a dream into experiment and success, however, is no easy thing.  Finishing high school in 1904, he was able to earn his Bachelor of Sciences degree in physics at Worcester Polytechnic Institute, graduating in 1908.  He lectured there for a year afterward before beginning graduate studies at Clark University, also in Worcester, earning both a Masters and a PhD in physics there by 1911.  Thereafter, he took a research post at Princeton University.  He postulated and proved that rocket thrust would work even in the vacuum of space.  He tested rocket nozzles to improve the shape and help increase thrust.  He developed methods to measure the potential thrust of rocket fuels.  With every step taken, his ideas took him farther toward outer space.  With research sponsorship from the Smithsonian, he continued his work into the 1920s.

Finally, on January 12, 1920, the New York Times covered one of his letters in which he postulated to the Smithsonian a range of ideas including the concept of ablative heat shields for atmospheric reentry, sending a spacecraft into distant space bearing a metal plaque that carried a greeting from mankind, using solar power in space, developing ion propulsion systems and even launching a rocket that could reach the Moon.  Taken together, the ideas sounded like the work of a madman — though every idea he was working on would become a reality in later decades!

The New York Times ridiculed him with their simplistic statement everyone knows that rockets cannot work in the vacuum of space — even high school students recognize that fact, they claimed!  The lesson to Goddard was that it was better to proceed with his experiments in private, a practice he would hold to for years after.  Decades later, in a belated apology, the Times published a correction to their error — indeed, Goddard had been right, rockets do work in the vacuum of space. 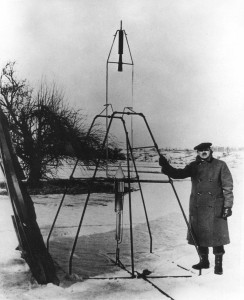 Robert Goddard standing beside his liquid- fueled rocket that was launched on March 16, 1926. The rocket is on top, receiving its fuel by two lines from the tank at the bottom. Source: NASA

On March 16, 1926 — today in aviation history — Robert Goddard launched his first successful liquid-fueled rocket from Auburn, Massachusetts.  In his journal entry, he referred to “S” and “E” — Henry Sachs and Esther Goddard, respectively — which sheds light on the private, non-commercial nature of his experiments.  Despite that, his scientific work had been rigorous, deeply considered and steadily advanced through experiments and tests at all stages.  The flight of the rocket that day, despite being a rather unimpressive thing (the rocket crashed into a cabbage patch after a very short flight), was a scientific triumph. 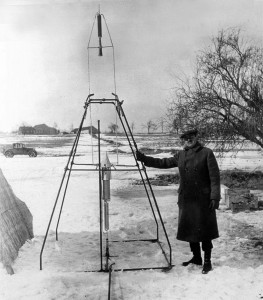 Goddard with his rocket before launch.

The day after, he wrote more in his journal, recording the events in greater detail:

“March 17, 1926.  The first flight with a rocket using liquid propellants was made yesterday at Aunt Effie’s farm in Auburn….  Even though the release was pulled, the rocket did not rise at first, but the flame came out, and there was a steady roar.  After a number of seconds it rose, slowly until it cleared the frame, and then at express train speed, curving over to the left, and striking the ice and snow, still going at a rapid rate.”

Often the greatest successes in science carry the least assuming air.  In the decades that followed, the greatest physicists and scientists in aerospace would rediscover the private writings and experiments of Robert Goddard.  His patents — more than 200 awarded — pointed the way to liquid-fueled rocketry solutions and discoveries in many areas essential to space flight.  His multi-stage rocket concept became the accepted method of heavy lift rocketry worldwide.  Dozens of other findings and discoveries would guide the research of men like Wernher von Braun and numerous others.  As for Aunt Effie’s farm in Auburn, today it is celebrated in the USA as a National Historic Landmark. 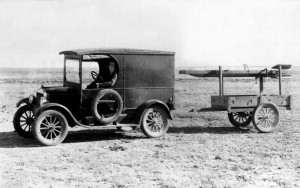 Dr. Robert Goddard tows his rocket to the launching tower behind a Model A Ford truck, 15 miles northwest of Roswell, New Mexico. 1930-1932.

Reflecting on the cherry tree, Robert Goddard once wrote, “I was a different boy when I descended the tree from when I ascended, for existence at last seemed very purposive.”  In later years, he took to celebrating October 19th — the day of his cherry tree dream — as his anniversary day.  It was that day that fired his dream with the strength that would guide his life’s work.  Sadly, he died in 1945 and never saw just how far his dreams would go.  We can be sure, however, that he imagined it all — and more that is yet to come.

Ultimately, the dream of a boy in a cherry tree would carry all of mankind into space, to the Moon and beyond.  As for how far that dream will carry us, nobody can know.

Robert Goddard had a habit of naming his rockets and experiments.  What was the name of his rocket that launched at Auburn?