On this date in aviation history, the International Civil Aviation Organization (ICAO) published a draft of the new, universal, worldwide phonetic alphabet to be used in aviation communications.  The phonetic alphabet uses multi-syllabic words to represent individual letters — thus, “A” is spoken as “Alpha”, “B” is spoken as “Bravo” and “C” is spoken as Charlie”, etc.  This move, while sounding simple on the face of it, was an essential and even critical advance in communications standardization and improved air safety.  One might ask why it was so necessary.  The answer is profound — prior to standardizing the phonetic alphabet, aviators in every country employed variations that made normal communications in international air travel challenging, confusing and sometimes misleading.

Yet things weren’t always so clear, nor even close to standardized in years past.  In fact, each country used their own terms and sometimes multiple terms were used even within a country.  Put simply, it was a mess. 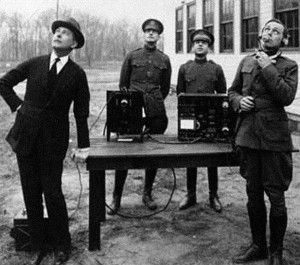 The first air to ground and ground to air radio communications were accomplished in July 1917 at Langley Field, Virginia, with the assistance of AT&T employees. Some are shown here (from left to right): Edward Craft, 1st Lt. Ralph Bown, Maj. Nathan Levinson and Col. N. H. Slaughter. Photo Credit: AT&T

The Origins of Spoken Phonetics

Early on, with the advent of vocal radio communications in the first decades of the 20th Century, it became apparent that listeners were confused when hearing a distant speaker, particularly on the HF band where static was the norm, which was worst at dawn and dusk.  The letter “Z” sounded like “D”, “C”, “E”, “V”, “P”, “G”, and so forth — in fact, all of these letters could be indistinguishable on the radio between each other!  Similarly, “M” sounded like “N”, and “S” sounded sometimes (but not always) like “F”.  There were also letter-number confusions, such as “H” sounding like “8″.  As well, there were letter-word confusions, like “9″, which is essentially identical to the German word for “no”, which is “nein”.

The first stab at assigning terms to each letter was probably around 1891, though the full phonetic alphabet is not in hand — it did include at least three letters that we know of today, including “Ack” for “A”, “Beer” for “B” and “Pip” for “P”.  This was further improved in the first year of World War I.  The Royal Army, Royal Flying Corps and Royal Navy ground-based radio communicators decided to correct mistakes in communications by implementing new standards using words for each of the letters.  Since aerial radios were not in use at the time, the changes were largely brought into effect by the radio operators working on the ground.  Within the RFC and Royal Army, the terms were standardized in 1914 and included:

Further, there was another phonetic alphabet that concurrently and informally emerged within the RFC and Royal Army, commonly called “Signalese” or “Western Front Slang”.  It included many variations from the officially defined phonetics, 17 differences in fact!  These included the same terms that dated back to the 1890s, which were readily picked up in the field.  The differences with standard RFC and Royal Army terms are highlighted in bold — here is the Signalese phonetic alphabet: 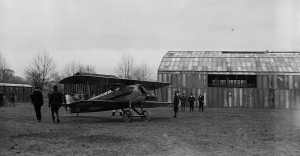 American aviators in France with a SPAD fighter/pursuit plane. Source: Library of Congress

Meanwhile, when the Americans arrived in France in 1917 and 1918, they brought their own variation of the phonetic alphabet with them to war.  The American terms had been standardized in 1916 and included:

To further complicate things, the Navies of each nation had a different radio phonetic code than the Army and aviation sides!  The Royal Navy used the following (as but one example): 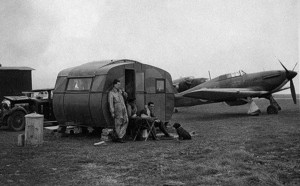 British pilots resting between missions during the Battle of Britain. Source: RAF

World War II brought a new set of terms that were carefully developed for even greater clarity and shared across the Allied side in 1942/1943.  These were used most frequently among American and British aviators and ground stations.  Radio discipline reached a fevered pitch within Britain during 1940 with the Battle of Britain, as this was an important facet of the ground-controlled interception system backed by radar that allowed Britain to prevail in the battle and such practices continued for the rest of the war and beyond.

Among the Allies, the following were the words employed for each letter by 1943 (and these terms would be used right through the end of the Korean War): 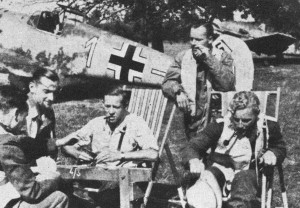 Meanwhile, on the Axis side of the battle, the Germans implemented their own phonetic alphabet for the very same reasons as the Allies had, taking the phonetics that had developed between the wars (in the 1920s) and modifying them to remove Jewish-sounding names that had been employed in those earlier days (the Nazis were rather focused on the so-called, “Jewish Problem” to the point of insanity, one might argue).  The Luftwaffe’s new Aryan terms, however, were absolutely different from the words used on the Allied side of the conflict.

In the typically individualized culture of the Luftwaffe, these terms were not always standardized, varying from area to area and even within squadrons.  The words used included (with the added letters that had umlauts and the variations showing the earlier “Jewish” names that had been eliminated from the phonetics): 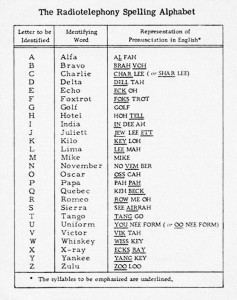 The original ICAO 1955 Phonetic Alphabet document with pronunciations beside each letter.

When ICAO submitted the new draft of a phonetic alphabet in 1955, it was quickly accepted and implemented worldwide.  Initially, pilots had some difficulties converting to the new terms, but that was only to be expected — many American airline captains, for instance, had flown in the USAAF, US Marines or US Navy during World War II and had “grown up” using “Able”, “Baker” and “Charlie”.  The switchover, however, was fairly rapid and within weeks most had adopted to the new terms rather painlessly.  Today, the full modern, ICAO phonetic alphabet includes the following: 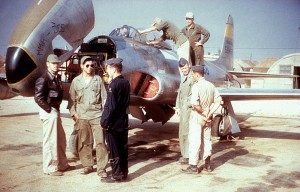 Local Variations Based on Need

The international standard remains not quite completely standard, however, even to this day.  You might notice, for instance, that when flying from Hartsfield-Jackson Atlanta International Airport, where Delta Airlines is based, the air traffic controllers and ground controllers might use “Dixie” or “David” instead of “Delta” so as to avoid confusion in routine communications with the name of the main airline that is hubbed there.  An example might be help to demonstrate why this important:

Clearly, this is a lot more understandable if the phonetic “Delta” is swapped out for “David”, as follows: 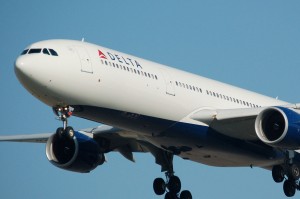 Today, standardized phonetics are used worldwide with some local variations.  With the globalization of air travel, the standardization of English as the international language for all aviation communications and the use of ICAO phonetics, aviation safety increased dramatically.  That is surprising in a way, as such a simple thing as terms and language can have such a broad impact.  Yet in the end, who knows how many crashes we have avoided over the years?  How much confusion was avoided?  One can only guess.

Ultimately, there is one other point worth mentioning.  As any pilot can tell you, there is also a certain cache to using the phonetic terms.  Indeed, that’s all part of the “Right Stuff” of what it means to be a pilot, after all.

During WWII, what were the phonetic terms in use by Italians and the French?