The Arado Ar 234B-1 streaked overhead at high altitude, beyond the reach of Allied interceptors.  Its sleek lines and twin jet engines gave it speeds that were in excess of 700 km per hour.  On board, a pair of Rb 50/30 reconnaissance cameras captured a nine kilometer wide swath of countryside from their mounting points in the rear of the fuselage, each canted outward at a 12 degree angle.  The single pilot on board flew it steadily as a pair of cameras imaged the ground below, taking a new photo in a steady stream every 11 seconds, advancing the film between frames to form a nearly continuous strip.  Before any Allied fighters could climb to altitude, the plane had flown its route and disappeared back across the English Channel to safety.

On the ground, the English radar operators could track the plane but could do nothing about it.  It didn’t matter much, they thought, given that the war was rapidly coming to a close.  The date was April 10, 1945 — today in aviation history — and just a few weeks later, the war in Europe would end with the death of Hitler, the occupation of all of the Axis territories and nations, and capture of a wide array of aircraft, including the very plane that had flown over England on the last reconnaissance flight of Germany’s war.

The sleek lines of an Arado Ar 234, as seen at the end of the war, still in Luftwaffe markings.

Incredibly, the Arado Ar 234 had first come off the design table back in 1940.  By the time the Jumo 004 engines were available for testing and the airframe had been proven, it would be mid-1943.  Testing moved rapidly and the plane proved to be a dream to fly.  Fully aerobatic, capable of high-G maneuvering, and with a reasonably good range once at altitude, it could outrun virtually airplane the Allies had.  Several versions were in development by mid-1944 — a reconnaissance version, a bomber and a fighter.  Even though most Jumo 004 engines were slated for the Messerschmitt Me 262 program, the Arado Ar 234 received sufficient engines to outfit a few dozen planes.

By July 1944, in the wake of the Allied landings at D-Day, the German military needed updated information that would verify what the ground commanders were saying, which was that the volume of Allied men and materiel was vastly larger than German intelligence had claimed was possible.  The Luftwaffe assigned the mission to the Ar 234B-1 squadron which began to fly regular missions over the beachheads.

The graceful shape of the Ar 234B.

Day after day, as weather allowed, they returned with the photographic images that proved that the Allies were massing more and more equipment and landing more and more men — stopping the flow was virtually impossible.  Whenever Ar 234B-1 pilots spotted Allied aircraft, they simply advanced the throttle and sped away.

Incredibly, the Allies didn’t even see their first Arado Ar 234 until November 21, 1944, when a flight of P-51Ds flying top cover over a bomber stream saw one speed by over Holland.  Quickly, they realized that they had no opportunity to intercept the plane — it was simply too high and too fast.

An Arado Ar 234 parked on the ramp at Freeman Field, Indiana, after the end of the war.

Though over 200 Arado Ar 234 aircraft were built during World War II, at any one time less than two dozen were operationally ready to fly.  Allied bombing of airfields, repair facilities and aircraft factories kept the numbers low.  While trying to address the emerging threat of the Me 262, Allied planes had begun to patrol over airfields where the jets were based.  In one case, a squadron of Spitfires ambushed a flight of Ar 234s when coming in to land — when they were most vulnerable.  Two Ar 234s were shot down and three damaged.

Maintenance on the aircraft was extraordinarily high.  The brakes burned out quickly given the high landing speeds required and thus had to be replaced after every third mission.  The engines each needed to be overhauled or replaced after an average of just ten flight hours.  Spare parts were difficult to obtain given the Allied bombing of German infrastructure.  Fuel was in short supply.  Access to the Jumo 004B engines continued to be limited as the bulk of the manufacturing was dedicated to supporting the Me 262 squadrons.  Thus, more than half of the planes delivered from the factory had empty shells on the wings since insufficient jets were available. 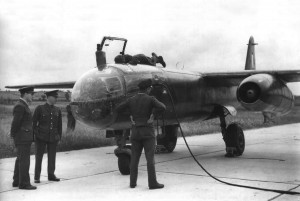 Despite the pressure from the overwhelming air power of the Allied forces, the Arado Ar 234s continued to fly right up to the end of the war.  Their finest role was in reconnaissance, where, fitted with drop tanks on the wings to extend their range, they could easily fly a 450 mile mission.  The quality of their cameras, including both the Rb 50/30 and Rb 75/30, was excellent, bringing the Germans a wealth of intelligence.  The bombing versions had proven to be excellent, though very few made it into combat — most famously, they repeatedly bombed the bridge at Remagen after it was captured by the Allies.

After the war, only two Arado Ar 234s were shipped to the USA for evaluation at Wright Patterson AFB.  One turned out to be not flyable and was scrapped while the other was flown just enough to log performance and determine what could be applied to US jet fighter programs.  Afterward, it was shipped to the Smithsonian in Washington, DC.  For many years, it remained out of public view awaiting restoration in Maryland.  Finally, it was rebuilt to its original specifications and condition, thereafter being put on display. 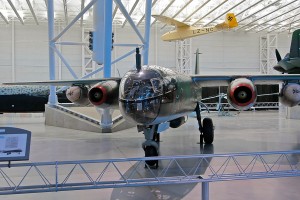 The last Arado Ar 234, a B-model, on display at the Smithsonian’s Udvar-Hazy Center. Photo Credit: Kogo

Today, the last example of the Arado Ar 234 can be seen at the Smithsonian’s NASM Udvar-Hazy Center by Dulles Airport west of Washington, DC.  Just looking at the plane sitting still on the ground, it looks like it is going 400 mph.  Ultimately, it was truly one of the most amazing “Wonder Weapons” of the Luftwaffe during World War II.

While the Arado Ar 234 could not achieve supersonic speeds, it was blazingly fast.  It was not the fastest of the Luftwaffe’s operational, active “Wonder Weapons”, however — what was?


I’ve seen the Arado several times at the Udvar-Hazy. What strikes me is the small size, in addition to its sleekness. It looks deadly fast and with a truly killer stall speed.