Flight of the Bremen

Against all odds, their plane had made it across the Atlantic Ocean from Europe to North America.  The flight was an aviation first that happened today in history, on April 13, 1928.  Until that moment, every successful transatlantic crossing had been heading west toward Europe, thus taking advantage of the prevailing westerly following winds.  Over the more than 36 hours they had been aloft, their plane, a Junkers W33 nicknamed “Bremen”, had veered to the right of course.  They had made landfall farther north in Canada than intended.  As they scanned the landscape below, comparing it with their maps, they found no recognizable landmarks.  What was more troubling was that they did not spot a single person or building — apparently, the part of Canada over which they were flying was barren tundra.

They realized there was a real possibility that they could crash in this wilderness and simply disappear — and with that, their record-setting first flight would be lost to history.  Indeed, just a year before, the famous French ace, Charles Nungesser, and his navigator, Francois Coli, had attempted a similar flight in their specially-built plane, “L’Oiseau Blanc”.  They had been lost — though whether they had made it to Canada was guesswork.  They had been last seen flying over Ireland still on a heading to the west before disappearing out to sea. 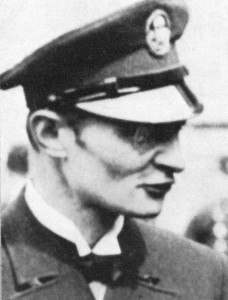 Ehrenfried Günther Freiherr von Hünefeld had a dream.  Inspired by the flight of Charles Lindbergh, who had crossed the Atlantic solo in a single engine airplane from New York to Paris, Freiherr von Hünefeld began to plan his own crossing.  After Lindbergh, much of Europe was entranced with the challenge of crossing against the wind in the other direction, from west to east.  If that could be done, then it might be possible to pioneer two-way air travel linking both sides of the Atlantic Ocean.  Yet Freiherr von Hünefeld was not a pilot.  In fact, he was blind in one eye and severely short-sighted in the other.  A war wound left him with one leg shorter than the other.  He was sickly, but well-funded at least given his noble titles.  From his perspective through the monocle that he wore over his right eye (his good eye, so to speak), he could see that the Americans and French had enjoyed their fair share of glory — now, it was Germany’s turn.

For Freiherr von Hünefeld, the choice of an aircraft seemed obvious.  It would have to be a German design and, given his friendship with Hugo Junkers, he purchased two of the new Junkers W33 single engine, all-metal monoplanes.  With additional fuel tanks and careful fuel management, the plane could conceivably make 38 hours of non-stop flight. 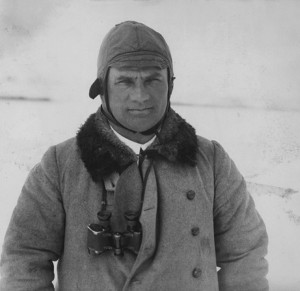 To support his vision, he recruited Captain Hermann Köhl, another German who was the head of the Deutsche Luft Hansa Nightflight Branch, and another pilot, who was also a moderately skilled navigator, Major James Fitzmaurice.  The latter hailed from Ireland.  In fact, this unassuming Irish pilot had previously trained and served in the RAF and had flown the mail on the Continent.  The two pilots were well-qualified for the flight, which they computed would require approximately 33 to 36 hours to complete, reaching New York City in the early afternoon one day after a morning departure.  First, they would navigate by the sun and then, with the onset of night, the flight would be over the western Atlantic still, allowing them to navigate by the stars.  By mid-morning, they would find the coast of Newfoundland and, flying southward, would pass the towns and cities that dotted the US coast until arriving at the unmistakable city of New York.

That was the plan, anyway.  What happened, however, wasn’t even close to their expectations. 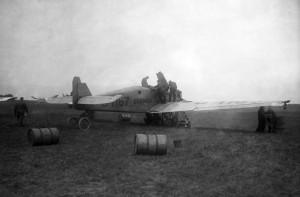 The “Bremen” at the start of its flight, still on the bround in Ireland as the sun rises. Source: German Federal Archives, Bild 102-05720

The Flight into History

The three men left Baldonnel Aerodrome, Ireland, in the “Bremen” on April 12, lifting off at exactly 5:38 am GMT.  An hour and a half later at 7:05 am GMT they passed Slyne Head Lighthouse on the westernmost point of County Galway.  Continuing west, they were soon out of sight of land.  The weather was favorable.  Passing the 30 degree longitude line, they worked out the time and distance equation to realize that headwinds had slowed their forward progress to just 90 mph.  It was all as expected, though.  They continued to navigate by the sun, holding a solid course by using a drift sight against the waves.

At 4:00 pm GMT, they climbed higher, hoping to improve their ground speed.  As the sun set, they took their final drift sight reading, hoping that the winds would hold generally the same over the night, though usually there were changes as the hours would tick by.  They would hold course, however, relative to the stars and, barring that, based on magnetic compass they had on board.  Clouds, however, were already obscuring the sunset, however, and they were soon flying under a solid overcast.  With sundown, they had no reference to the stars for navigation due to the clouds.  They climbed to 6,000 feet in the evening.  Yet here they were confident in their night navigation skills — after all, Captain Hermann Köhl, as earlier noted, was the head of the Deutsche Luft Hansa Nightflight Branch.  He held a solid course through the night based on the compass alone.  In any case, they should have been just three hours from landfall by that time. 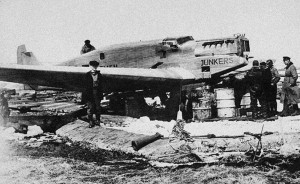 The “Bremen” after landing in Quebec, Canada.

Morning and the End of the Flight

Before the first light of morning, the overcast broke and they caught the first sight of the North Star.  Incredibly, with that, they realized that the magnetic compass was 40 degrees off, twisted southerly.  Thus, instead of heading on the correct course, they had been heading 40 degrees off course angled toward the north.  Immediately, Captain Köhl turned to the southwest, making a nearly 90 degree course correction.  Even so, as dawn broke they knew that they had been far off course.  They could see also that they were over land.  Scanning below, nothing they saw was recognizable on the maps.  All they knew was that they were flying somewhere over Canada.

The wind was directly in their face.  As a result, their forward progress was too slow.  To avoid the wind, they took the plane down low, skimming low over a valley.  They kept their eyes searching for houses and people but none were seen.  If they were to crash here, they might never be found.  Down low, they made better time, however.  Though there were others who saw the plane flying low through the valley, they still saw no one.  Indeed, the area was sparsely populated after all, but they had not seen any evidence of that.  They continued on, passing 32 hours aloft. 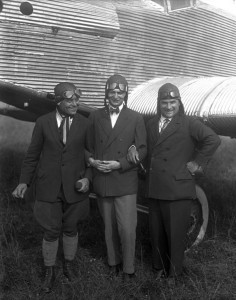 Finally, they spotted a lighthouse located on an island near the edge of a body of water — circling, they could see four people nearby as well as a pack of dogs.  They set up a landing on a flat area nearby, damaging the plane but coming to a safe stop.  The three men descended from the “Bremen” to celebrate — and find out just where they were located.  They learned then that they were at the Strait of Belle Isle, close to where the borders of three Canadian provinces, Quebec, Labrador and Newfoundland, came together.  While they hadn’t made it to New York, they had made it across the Atlantic safely and landed at Greenly Island.  In the end, they had missed New York by 1,200 miles — with the fuel they had available, they would never have made it the rest of the way.  They had flown non-stop for 36.5 hours, landing at approximately 6:10 pm GMT (around noontime locally). 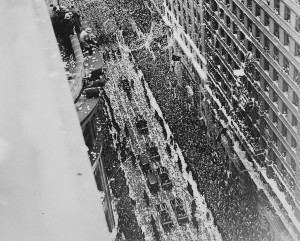 The flight crew of the “Bremen” cruise down Broadway during a New York ticker tape parade in May 1928.

When news reached Europe and the United States of the success of the flight, the three men were elevated to heroic status among the pioneering aviators of the day.  Weeks later, they came to New York where they were celebrated with a parade through New York, not too dissimilar from Lindbergh’s welcome.  On May 2, 1928, President Calvin Coolidge conferred the Distinguished Flying Cross on each of the three men.  Freiherr von Hünefeld had finally achieved the fame he had desired, though he still felt that he had something to prove.

Six months later, he took the other Junkers W33, which he had named the “Europa”, and hired a Swedish pilot, Karl Gunnar Lindner, to attempt a round-the-world flight.  They took off from Berlin on September 18, 1928, and made their way down through Europe, across the Middle East, across Persia and then India before skirting the coast of Asia and China.  They made multiple stops along the way, resting as they went given that there was no reason to push the clock.  Reaching Japan, they came to Tokyo on October 20.  The hardest leg was ahead, the crossing of the Pacific.  Yet the weather was not favorable for a departure.  As the days went on, Freiherr von Hünefeld’s health began to deteriorate.  In pain and realizing that his usual sickly nature was not to blame, wisely, he cancelled the attempt.  Three and a half months later, back in Berlin, he died from stomach cancer.

James Fitzmaurice lived a long and full life after the flight of the Bremen.  After many other aviation adventures, he finally passed away in 1965 at 67 years of age.  As for Captain Hermann Köhl, in 1935, he lost his position at Deutsche Luft Hansa and left Berlin.  He purchased a farm and lived out the rest of his life there so as to avoid having to work with the Nazis, to whose rule he objected.  He died just three years later in 1938, at peace in Munich.

What became of the two Junkers W33 aircraft, the “Bremen” and the “Europa”?


Traveling from Europe to North America is an East to West direction. Lindberg flew in a easterly direction, the Bremen flew westerly.


The Bremen D1167 is presently in Henry Ford’s museum in Dearborn, Michigan. As for the Europa, I don’t really know where it is at the present time.


The aircraft Bremen is currently on loan to the Bremen airport in Bremen, Germany.


The photo credit for the crash site photo of the Bremen should be noted as Edward N. Jackson, a press photographer for the New York Daily News.


Roger that! Thank you for the information — and this will be added ASAP as soon as we can figure out what you meant by “crash site” — i.e, which photo exactly?


The photo of the Bremen “landing” in Quebec. It was a crash-landing and the photo shows the plane resting on empty fuel drums because of landing gear damage. Also note the prop is also missing. This too was damaged in the “landing” on Greenly Island. I have many photos of the greenly Island crash site taken by press photographer Edward N. Jackson