The Chinese Shenyang J-8D jet fighter closed rapidly, its flight path erratic as it approached the US Navy ELINT plane, a Lockheed EP-3E ARIES II flying a routine mission approximately 70 miles off the coast of China’s Hainan Island.  The Chinese pilot dodged under the American plane — it was his third pass of the day, one that didn’t make any sense given that the American mission was over and the flight had already turned to return to its base on Okinawa.  Suddenly, the J-8D emerged under the wing of the EP-3, so close that the American crew could see the Chinese pilot just 10 feet away.  The J-8D pilot had misjudged, however, and flew directly into one of the four large propellers spinning at the front of the engine nacelles of the American plane.  In an instant, his J-8D was literally cut in half by the huge prop.  As the EP-3 rolled inverted and plummeted out of control toward the sea below, the US Navy pilot glanced at the Chinese fighter jet and saw it falling away in flames.  An instant later, he realized that the EP-3 was in a screaming dive and not responding to the controls….

One of VQ-1’s EP–3 ARIES aircraft, of the type that was involved in the Hainan Incident. Source: DoD

The Lockheed EP-3 ARIES (Airborne Reconnaissance Integrated Electronic System) is a highly modified version of the venerable P-3 Orion.  Flying with the US Navy’s Fleet Air Reconnaissance Squadron One (VQ-1, “World Watchers”), an electronics intelligence squadron, the plane had been regularly performing ELINT missions along the coast of China.  On many past missions, the Chinese People’s Liberation Army Navy had intercepted the planes as they flew along the coast, far out of sight of land and in internationally recognized airpace.  Mostly, the Chinese just kept an eye on the planes, but also meant to contest the American flights, since China claimed the airspace as an exclusion zone.

Over the years, the typical interception mission would involve two or more Chinese jet fighters who would close on the EP-3 ARIES aircraft and hold station for a time.  The EP-3 ARIES missions were designed to capture Chinese electronic signals, including communications, radars, and missiles systems emissions — thus, they were performing a regular “spy mission” — though calling it that is a bit inaccurate.  These were no spies, but rather just technicians on routine electronics flights with the full knowledge of all involved.  Sometimes, the Chinese planes would harass the flights making close passes alongside, though typically at a safe distance.  A few times, the Chinese pilots flew too close, but that was unusual.

The mission was on April 1, 2001 — today in aviation history.  It took off early in the morning from VQ-1’s base at Okinawa.  In the cockpit, the aircraft commander was Lt. Shane Osborn, USN.  The plane was packed with sensitive electronics equipment and manned “in the back” by a full complement of systems technicians.  Altogether, on board the EP-3 ARIES were 24 crew — 21 men and 3 women.  After nearly six hours on station and within about 10 minutes of when they were supposed to return to Okinawa, they were intercepted by a pair of Chinese Shenyang J-8D “Finback” jet fighters.

One of the J-8Ds approached closely — too close, in fact, as the men at the windows of the EP-3 ARIES called out the distances.  After passing by within a few feet, it returned a second time and performed another close pass, clearly intending to harass the American ELiNT plane.  At that point, the EP-3 ARIES made a gentle turn toward Okinawa, expecting that the Chinese would peel off and return to their base at Lingshui airbase.  Instead, the two J-8Ds returned for a third pass — in the cockpit, Lt. Osborne had a sinking feeling in his stomach, perhaps a premonition of what was to come.  He felt it at that moment that a collision was imminent.  In accordance with Navy policy, he continued to have the autopilot fly the plane, just monitoring it to ensure that no malfunction caused the plane to deviate from course or altitude in any way.

When the J-8D fighter impacted the EP-3’s prop, it was cut cleanly in half.  Both parts fell away as the fuel torched off in a roaring tail behind the falling pieces.  Lt. Osborn realized the damage done — the number one prop and engine were badly damaged, the nose was torn away and the wind roared through the plane, which had depressurized.  The aileron was jammed up causing the plane to roll uncontrollably to the left, and finally an antenna wire had wrapped around the tail, fowling the control surfaces.  Much of the cockpit instrumentation, including the airspeed indicator, was out.  As Lt. Osborn struggled to regain control, he watched the two main pieces of the J-8D spinning downward and thought, “He’s having a bad day.” 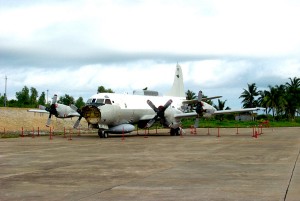 The EP-3E ARIES II aircraft that was involved in a midair collision with a Chinese J-8D fighter jet on April 1, 2001. Source: Lockheed

Lt. Osborn would later relate the circumstances in an interview to Frontline:

The plane just shook violently and we kind of pitched up. I heard a pop, and that was his nose hitting ours. He shot off to the side and we were upside down before I knew it. [I was] trying to stop the plane from going completely inverted… and I was pretty certain we were dead at that point.  We were upside down in a large reconnaissance aircraft. I had lost my nose. I could hear the wind screaming through the plane, and I knew that number one prop was violently shaking. We were pretty much inverted. I was looking up at the ocean, so it was not a good feeling.

Somehow, he managed to twist the plane out of it inverted bank, even as the plane was plummeting earthward, losing 8,000 feet in just XX seconds.  Lt. Osborn recalled the circumstances well:

At that point, we had a runaway prop that was missing large chunks and violently shaking and we tried to get that shut down. It wouldn’t shut down. … I’d lost my airspeed in any case, so I couldn’t tell how fast we were going. There was a lot of noise in the cockpit; we’d obviously depressurized with the holes in the nose. I put full power on the other three remaining engines, but we were still screaming out of the air. It wouldn’t hold the altitude up that high with all the drag, so it took to about 8,000 feet before we could hold the altitude. We started out at 22.5, and it was 8,000 feet before we were flying again, so it was a rough day. 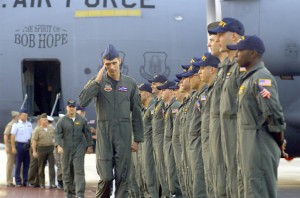 Descending to 8,000 feet above sea level, Lt. Osborn was finally able to hold altitude.  It was a terrible moment, however, and they realized that the only option they had was to land on the Chinese airfield at Hainan Island, at Lingshui airbase.  As he nursed the plane toward the runway, he called for clearance to land — despite 15 separate requests, the Chinese never responded.  In the meantime, the crew in the back went to work destroying and neutralizing the ELINT equipment and data in the back of the plane — quickly following DoD and Navy protocol, despite the emergency situation.

Finally, Lt. Osborn touched down at Lingshui airbase and rolled to a stop.  The crew in the back cheered, but didn’t stop working on destroying the equipment.  Meanwhile, the Chinese military surrounded the plane and began to demand that the crew shut down the engines and deplane — to buy time for the crew in the back to finish with the destruction of the equipment, he shut down the engines slowly, one by one.  Even then, with everything off, they did not open the door.  Finally, screaming through a bull horn and pointing AK-47s into the windows, the Americans finished their work and popped the EP-3’s door.  Lt. Osborn exited and tried to delay the Chinese military from boarding, but it was hopeless.

The American ELINT crew was held for over two weeks, during which they were subjected to unrelenting interrogations and sleep deprivation.  Despite every attempt by the Chinese, the Americans simply discussed the circumstances of the flight, what had happened and the details about the out of control Chinese pilot (his body was never recovered).  Ultimately, through negotiations from the White House with Beijing, which demanded a letter of apology and claimed that the Americans had downed a Chinese plane and killed its pilot, a letter was issued expressing regret and sorrow that the Chinese airman had died.  It was the best that could be done — as the US State Department noted, it was impossible to apologize when the US Navy flight crew had done nothing wrong.

The EP-3 ARIES could have been repaired and flown out, but the Chinese refused to allow it.  Instead, a Russian An-124 was flown in and the plane was dismantled and shipped out.  The American flight crew was finally repatriated to their home base, where they received a heroes’ welcome.

When was the first reconnaissance mission flown along China’s coast and by whom, in what type of aircraft?


I would say that flights directed against mainland China started in the fall of 1952. This was one of the earliest deployments of the North American RB-45C. RB-29s may also have been involved.

However, there were probably other flights which were incidental to the survey of Russian bases by Strategic Air Command and recce missions in Korea by our Far East Air Force.