On July 20, 1969, as Neil Armstrong and “Buzz” Aldrin descended toward the surface of the Moon at a location that NASA and the astronauts termed, “Tranquility Base”.  Despite immense obstacles, several last minute near failures and some superb piloting, at 4:18 pm Eastern Daylight Time, the Lunar Module touched down on the surface of the Moon.  Armstrong breathed, “The Eagle has landed.”

As those famous words echoed across television sets and radios around the world, a collective sigh of relief swept the globe.  Man had landed on the Moon — a quest since time immemorial had been achieved.   Most than six and a half hours later, after all of the post-landing tasks were completed, Neil Armstrong opened the door to the vacuum of space, stepped onto the ladder and descended to the surface.  At 10:56 pm, with a short hop, he set foot on the Moon.

And Neil Armstrong said:  “That’s one small step for a man, one giant leap for mankind.”  Moments later, Buzz Aldrin followed him onto the surface. 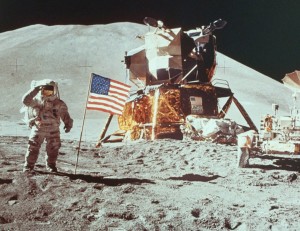 In the Event of Moon Disaster

Among many other things that would have transpired on that fateful day, President Richard M. Nixon had planned to deliver a speech.  Written by William Safire, it was a soaring speech, yet sorrowful and dark. 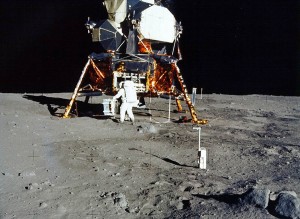 This was the speech that was prepared:

Fate has ordained that the men who went to the moon to explore in peace will stay on the moon to rest in peace.

These two men are laying down their lives in mankind’s most noble goal: the search for truth and understanding.

In their exploration, they stirred the people of the world to feel as one; in their sacrifice, they bind more tightly the brotherhood of man.

In ancient days, men looked at stars and saw their heroes in the constellations. In modern times, we do much the same, but our heroes are epic men of flesh and blood.

Others will follow and surely find their way home. Man’s search will not be denied. But these men were the first, and they will remain the foremost in our hearts.

For every human being who looks up at the moon in the nights to come will know that there is some corner of another world that is forever mankind.

PRIOR TO THE PRESIDENT’S STATEMENT: The president should telephone each of the widows-to-be.

AFTER THE PRESIDENT’S STATEMENT, at the point when NASA ends communications with the men: A clergyman should adopt the same procedure as a burial at sea, commending their souls to “the deepest of the deep,” concluding with the Lord’s Prayer. 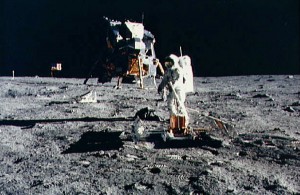 It didn’t happen, however.  Man successfully landed on the Moon — and it happened 44 years ago today.  The rest is history.

1 thought on “In the Event of Moon Disaster”