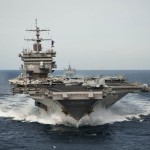 Go “on station” with the USS Enterprise (CVN-65) as the ship turns 50 years old and sails its final cruise this year before retirement. The photos in this article are drawn from the ship’s final cruise, “somewhere in the Arabian Gulf….” We dedicate this feature gallery to the ship, its crew, and its long and storied history.
==> VIEW FEATURE STORY 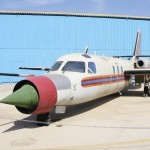 Our monthly collection of interesting aircraft and aviation-related finds that are surprising, unique, rare or fascinating. If you have a suggestion for next month’s Surprising Sightings feature, please email us at: hw@historicwings.com.
==> VIEW FEATURE STORY 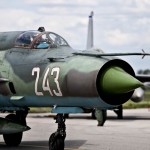 In April 2012, the USAF and the Bulgarian Air Force held joint exercises at Graf Ignatievo Air Force Base, Bulgaria. Two US fighter squadrons out of Aviano AB, Italy, brought more than 30 aircraft and 500 personnel, while the Bulgarians hosted with a collection of modern and venerable Russian equipment, including MiG-29s, MiG-21s and Su-25s.

This Month’s Feature from the Archives

The story of Chuck Yeager and the Bell X-1 and how America became the first to break the speed of sound. Every month, we will be republishing a feature story from our archives. Over the years, many high quality aviation features were published at Historic Wings and our intent is to bring all that content back online. Where necessary, these features are being reprogrammed to modern web standards and to larger sizes for easier viewing (15 years ago, the average screen setting was just 640 pixels wide). We hope you enjoy these features — history never gets old.

The story of Chuck Yeager and the Bell X-1 and how America became the first to break the speed of sound. This feature was originally published in October 1997 to coincide with the 50th anniversary of Chuck Yeager’s famous flight. In celebration of the relaunch of Historic Wings, it is fitting to republish this now, since it was the very first feature story we ever published, 15 years ago.