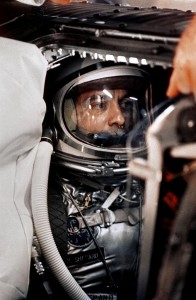 NASA Astronaut Alan Shepard in the capsule of Freedom 7 in the minutes before launch on May 5, 1961

Fifty-one years ago this month, on May 5, 1961 that Alan Shepard rocketed skyward to become America’s first man in space. Lieutenant Commander Alan B. Shepard, Jr., was a Navy test pilot before being selected by NASA for Project Mercury. From among the seven astronauts selected for America’s first efforts at manned spaceflight, Shepard was the first to launch into space, his capsule bearing the name Freedom Seven.

In the month’s before Shepard’s Mercury flight, the Russians had beaten America into space, not only putting the first man into space, but also orbiting him — this was Yuri Gagarin. At the time, it seemed that the Soviets were far ahead of America and their launches were coming quickly, one after another, as they explored spaceflight, aiming to turn it to their own purposes.

NASA rushed ahead and launched the Mercury capsule atop a Redstone rocket, which had a very dubious safety record. It was a serious risk, but it paid off with a successful space flight. His flight recorded just a few minutes of weightlessness and clocked in just 15 minutes of flight time, yet served as a message to the world that America had joined the space race. The success of Shepard’s mission also prompted President Kennedy to commit the country to reaching the Moon.

After Shepard’s flight, in a Rose Garden ceremony, the President spoke those immortal words, “I believe this nation should commit itself to achieving the goal, before this decade is out, of landing a man on the moon and returning him safely to the earth.”

The missions that followed — including both the Gemini and Apollo programs — took the nation all the way to Neil Armstrong’s famous “small step for a man” on the Lunar surface. Incredibly, Alan Shepard served on Apollo 14, achieving the most accurate landing in the Apollo program and becoming the fifth person to walk on the Moon’s surface.

Despite being America’s first man in space, Shepard is best known for also being the first and only golfer to hit balls on the surface of the Moon. In low gravity, the two balls he hit had the potential of sailing an incredible distance. To make his golf shot, Shepard used a Wilson six-iron head attached to a lunar sample scoop handle. With the bulky and stiff spacesuit, he could only swing with one hand, causing him to badly hit the first of the two balls. The second ball, however, he hit with some force and despite hooking it badly (accordingly to his fellow astronaut on the Moon), Shepard would later say that he hit it, “miles and miles and miles.”