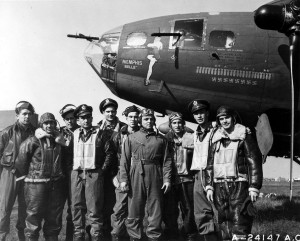 The flight crew of the B-17 "Memphis Belle" under the command of Major Robert K. Morgan, 91st Bomb Group

During World War II, Major Robert K. Morgan piloted one of the most famous aircraft of WWII, the “Memphis Belle.” The B-17F was named after Morgan’s wartime sweetheart from Memphis, Margaret Polk.

The Memphis Belle received recognition on May 17, 1943 when, flying out of Bassingbourn, England, with the 324th Bomb Squadron (Heavy), its crew became the first to survive a full tour (25 missions) over Nazi occupied territory. Until that time, no other intact crew had made it through 25 missions — they were all either shot down or crashed. Those who are experts in history will point out that the B-17 “Hell’s Angels” (41-24577) of the 303rd Bomb Group completed 25 combat missions on 13 May 1943, the first aircraft to accomplish this feat — however, its crew had varied during the missions flown.

The odds were stacked heavily against survival. At the time, with each mission flown more than 5 percent did not return. The air battle over Europe was a deadly affair — looking back on the odds, it was safer to be in any role in the role, in fact, it was safer to have been a Marine landing on the beaches of Okinawa than to be in a bomber flying over Germany. Nonetheless, the crew were all volunteers and they approached each assignment with professionalism. “There weren’t any milk runs or easy missions.” Morgan stated, “We were very fortunate to come back every time.”

In 1987, the original Memphis Belle was restored and placed on display in Memphis, Tennessee, and later sent to the USAF Museum at Wright-Patterson AFB, Ohio, where it is undergoing an extensive restoration. When the staff there cleared off the many layers of paint to reveal the aircraft’s bare aluminum skin, they were surprised to find names scratched into the aluminum that dated from the war bond tour, when people were allowed to put their mark on the aircraft.

The future of the Memphis Belle is secure — once fully restored, it will serve as a continuous memorial to the men of the U.S. Army Air Forces who served in England during World War II.

The name Memphis Belle has carried on in USAF history to the present day — today, a B-52H (60-0001 — the first of the H models) is named Memphis Belle IV. It is currently in service and based at Barksdale Air Force Base, Louisiana, with the 2nd Bomb Wing. Over the last ten years, it has successfully completed bombing missions over both Iraq and Afghanistan.