The Catalina Affair, Part 2 of 3 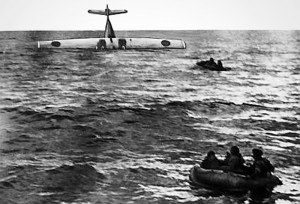 The crew watched as MiGs circled around for another pass. As this was happening, pilots Sven Törngren and Olof Arbin turned the PBY Catalina to the west, taking a heading toward Swedish airspace. Just two minutes later at 04:11 am, the Swedish Catalina transmitted a second message: “We are being fired upon with 20mm tracer rounds, hitting to the right.”

Immediately after the loss of the Tp 97 Hugin, a search and rescue operation was mounted in hopes of finding some survivors. Two days into the search, a damaged life raft was located and retrieved.  Shrapnel from the attacking MiG-15’s cannon shells were recovered with the raft.

The third day of the search dawned early — with the midsummer season, the planes were up in the early morning hours and already in the search area by 4:00 am off the coast of Estonia.  The day’s search would be carried out by two Swedish Tp 47 (Consolidated PBY-5 Catalina) amphibious aircraft from the squadron F2 flying out of Hägernäs as well as a third aircraft, a Tp 2 (Junkers W 33/34 from the pre-war era).  Although it seemed increasingly unlikely that any survivors would be located, the planes took off just after midnight (one was logged out at 12:49 am) and headed east to commence flying a search pattern.  Even if no survivors could be located, it was thought that perhaps debris from the Tp 97 might be found floating on the water.

Again, the Swedish aircraft were not escorted — indeed, a search and rescue mission was not considered threatening to the Soviets and thus, it was thought that no escort was warranted.  The shootdown of June 13 was a clear message that the Soviets would no longer tolerate the increased tempo of intelligence missions, but the view was that a recovery and rescue operation would likely be left alone.

Much to the shock of the flight crew, two Soviet MiG-15bis fighters suddenly appeared in the sky, closing fast.  Commander Sven Törngren recalls saying, “MiG-15! The Russian’s most modern fighter — how very interesting….”  At this point, the crew did not immediately recognize that an attack was imminent, but, as with any interception, the risk was always there and there was clear concern.

At 04:09 am, the pair of MiG-15s made a first pass by the Swedish Catalina at high speed, one to the right and the other passing on the left. It appeared to be a mock attack run. Immediately, the Swedish crew transmitted a message to their base at Hägernäs: “Fake attack by two MiG planes.”

The crew watched as MiGs circled around for another pass. As this was happening, pilots Sven Törngren and Olof Arbin turned the PBY Catalina to the west, taking a heading toward Swedish airspace. Just two minutes later at 04:11 am, the Swedish Catalina transmitted a second message: “We are being fired upon with 20mm tracer rounds, hitting to the right.”  The cannon fire from the MiG-15s was hitting the water to the right side of the plane.  The Catalina took evasive action by dropping down low over the waves.

Once again, the MiGs came around. This time they fell in behind and began a series of several attacks on the aircraft. At 04:15, the Swedish Catalina crew transmitted another message: “I have been fired upon and hit several times.” Indeed, the third pass by the Soviet MiGs had caused some moderate damage when cannon rounds ricocheting off the water damaged the fuselage. On the fourth pass, the Soviet cannon fire had hit the left wing.  On board the PBY Catalina, luckily there were as yet no injuries among the crew.

The attack was relentless and the MiG-15s circled around yet again, closing in from behind. Their fifth attack scored hits on the aircraft’s elevator before the MiGs once again broke off to circle around for a sixth attack.  Again, they closed on the Swedish search and rescue plane and fired with their 23mm cannon.  This time they hit the left engine.

Recognizing the impossibility of escape, the crew attempted to make an emergency landing.  Yet again, the MiG-15s circled back into another attack, this time scoring direct hits into the Catalina’s cockpit, hitting both First Pilot Olof Arbin and the navigator, Ove Engberg.  Both were seriously wounded.  Shrapnel also tore into the flight suit of Radio Operator Eriksson, who was lucky to come away uninjured.

The damage from the last attack was severe — the electrical system was knocked out and the oil from the autopilot was spurting out.  In addition, the radio was knocked out.  This meant that they could not transmit any additional signals and reports to base.  The only comfort was the knowledge that the base would assume the worst when no further communications were received and hopefully, a rescue mission would be dispatched — perhaps this time with an armed fighter escort.

Seeing a nearby ship ahead, the Swedish pilot turned the PBY Catalina and, despite his injuries, at 04:20 am was able to make an emergency landing nearby.  The Catalina’s nose was damaged in the emergency landing (and from the attacks) and was split wide open.  Water gushed in rapidly.  The crew quickly abandoned the plane onto life rafts.

Even then, as the Catalina settled into the water, its tail reaching for the sky, the Soviet MiGs circled around one more time, seemingly unfazed that their seventh attack would be witnessed by the nearby ship’s crew. The two Soviet MiG-15s made a final pass, this time feigning an attack on the downed plane and rafts.  Luckily, the MiGs did not fire before turning to fly back toward their home base.  Just ten minutes after its emergency water landing, the Swedish PBY Catalina sank under the waves.

Back at Hägernäs, with no word from the PBY Catalina, the operations group assumed the worst.  They ordered that the other PBY Catalina and the Tp 2 were to immediately return to base.  Furthermore, the Swedish Air Force would take no chances — a fighter escort was scrambled to cover their flight back, which was completed without further incident.

On the water in their life rafts, the flight crew realized that they were still far from the ship, which turned out to be a West German freighter called the Münsterland under the command of Captain John Dierks. Nonetheless, their concerns about possibly being left behind were ameliorated when the captain maneuvered quickly around to pick them up.  Also, Captain Dierks had the presence of mind to record his position and log what they had seen of the attack. Later, this carefully recorded position of the Münsterland would serve as clear evidence that the downed Catalina had been in international airspace.  As the crew was brought on board, the sailors on the Münsterland spotted two additional aircraft at higher altitude passing over the ship.  Fearing retaliation from what they recognized were probably additional Soviet MiGs, the captain ordered that the Swedes be brought below decks and that their rafts be cut free from the freighter.  Without delay, the captain then steered a course away from the scene.

The ship captain elected proceed to a different port of call than scheduled at Hangö, a closer port that was also in Finland.  Rightly, he feared that there was a possibility that he might be boarded in the northern Baltic by the Soviet Navy.  The flight crew were interviewed by the media on arrival.  Medical care was provided for those injured.  Soon after the flight crew delivered their rather candid interviews, and while the crew was at the Swedish Consulate there, a message was received from their base to keep the matter secret.  They were not to disclose anything to the press or public — it was already too late, however, as “the cat was already out of the bag”.  Within hours of their arrival in Finland, the airwaves were abuzz with news of the shootdown.

Press Reports and the Public Reaction

With survivors and West German witnesses, the news of the attack lit up the press. The Swedish Government was faced with a full blown international incident. There would be no denying an attack by the Soviet Union against Sweden. Further, the attack was unprovoked, with two top of the line combat jet fighters attacking a search and rescue airplane in international airspace.

Within hours, the press had dubbed the incident “The Catalina Affair,” naming it after the type of the second aircraft that was attacked (they could gain no confirmation from the government regarding the first loss of the Tp 79 Hugin, even if there was an inference of Soviet responsibility).

The Swedish public was outraged. Some went so far as to say that Sweden was entering into a state of war with the Soviet Union. Others called for the Swedish military to patrol the airspace of the Baltic and fire on any Soviet aircraft encountered. The Swedish Air Force issued orders that if any of its aircraft were attacked by East Bloc states, that they would respond with force. A small public demonstration took place outside of the Soviet embassy in Stockholm.

The search and rescue operation was called off and the Squadron F2 stood down.  The risk of a continued escalation with the Soviet Union was simply too great — resolving the situation would have to done politically or diplomatically or, if not that, then it would be likely that the matter would enter a new and dangerous military phase.  As midnight sun dipped toward the horizon on June 17th, the very real possibility of direct combat between Swedish and Soviet aircraft loomed ominously.