On this day in aviation history in 1943, the US Navy K-Class airship, K-74, was lost to enemy fire — not from another aircraft, but in head-on combat against a German U-Boat on patrol in the Straits of Florida.  The K-74 would come away the worst for it when it was downed by machine gun fire from the submarine.

The German U-Boat U-134, a Type VIIC submarine, was commissioned into service on July 26, 1941.  The U-134’s first four patrols would be up the coast of Norway and in the Barents Sea, hunting shipping that was destined for Murmansk as part of America’s Lend Lease Program to Russia.  In May of 1942, the U-134 would be assigned to La Pallice on the French coast for Atlantic duty patrolling the Florida Straits and west coast of Africa.  In all, the U-134 would participate in seven Wolfpack operations against Allied shipping, sinking two vessels plus another that was a “friendly fire” sinking of an unreported German freighter passing through its patrol area.  Her ninth and final patrol, under the command of Kptlt. Hans-Günther Brosin, would take her a second time to the Florida Straits and into her battle with the K-74.

The US Navy’s K-74 was a typical K-Class patrol blimp, one of 135 built and flown on both Atlantic and Pacific antisubmarine duties.  The airship was built by the Goodyear-Zeppelin and Goodyear Aircraft Corporation as part of an 89-airship contract awarded in mid-1943, starting with K-51.  The production rate for the blimps was astonishingly fast (in large part due to their low sophistication) since key component was only the cab (or blimp car, as it was called) which featured two engines on the sides.  This hung under a non-rigid gas envelope that encompassed 425,000 cubic feet of helium and measured 250 feet long.  Assigned to Blimp Squadron ZP-21 out of NAS Richmond in Florida, the K-74 was a brand new blimp at the time of its encounter with the U-134.

The U-134 Sails and is Attacked

On June 10, 1943, the German U-Boat U-134 sailed from La Pallice, destined for the Florida coast.  On July 8, the U-134 was detected by a US Navy Martin PBM Mariner aircraft flying out of Bermuda (this was flown by an aircrew with pilot Lieutenant W.W. Soverel and copilot LTJG J. T. Hitchcock of USN Squadron VP-201).  According to the official attack analysis, the following is what transpired:

Breaking out of a mild thunderhead at 3000 feet altitude and heading in a generally down-moon direction, the tunnel gunner sighted a wake astern in the moon path.  The pilot changed course about 270° to the left, lost altitude to 2200 feet, picked up the left side of the wake and flew parallel thereto until sighting a northbound submarine up moon and three miles away.  The pilot immediately made a diving right turn to attack, keeping the submarine in the moon path.  No gun fire was exchanged, and the submarine was taken completely by surprise.

The U-134 would survive the aerial attack by machine gun fire and six depth charges by diving to escape.  The U-134 then continued southeast and on July 15 passed north of Nassau and across the northern coast of Andros Island into the Straits of Florida on the hunt for American shipping. 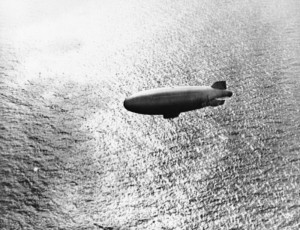 At 11:40 pm, while the K-74 was flying a search pattern at 500 feet altitude in crystal clear night skies, ARM3c R. H. Bourne called out a radar surface contact, bearing 240 degrees at 8 miles range.  Lt. Grills turned the airship to approach from a heading that placed the surface target against the reflection of the moonlight.  They spotted the surface contact running on a southwest heading of 220 degrees.  Shortly thereafter, the crew identified the low profile of a German U-Boat on the surface against a slight swell of waves, silhouetted clearly against the moonlight, its white wake trailing from the stern.  They had spotted the U-134.

Lt. Grills knew of other surface contacts in the area and realized that the U-Boat was running at an estimated speed of 15 kts directly toward two Allied cargo ships, a tanker and a freighter transiting the Florida Straits.  In accordance with new Naval procedures, the radioman attempted to file a blip message, but it was lost in the static and he had to file it a second time (he would later report that it had been filed on the “Scene of Action” frequency).

The U-Boat was just west of the Cay Sal Bank.  The airship reported the position as 23°35? N lattitude, while the U-Boat reported that the battle took place at 23°50? N lattitude.   Most likely, the battle was along the 80° 50? W longitude line.  The airship circled at a distance twice, making positive identification of the German submarine.  In hopes of saving the two ships from an impending attack by the U-Boat, Lt. Grills considered his options.  An attack by a blimp against a submarine was dangerous — the airships were simply too easy to hit with anti-aircraft fire.  To attack would not only be a daring and unconventional tactic but one that was against US Navy standing orders — yet the threat posed by the U-Boat left him with little choice.

Recognizing the risks, Lt. Grills order the K-74 blimp to attack, hoping that the darkness of night would hide their approach until they could attack and sink the submarine.


One More Bit of Aviation Trivia

Although slow-moving and easily spotted, blimps played a key role in the Battle of the Atlantic against the threat of German U-Boats.  Fully 135 K-Class blimps were built by the Goodyear-Zeppelin and Goodyear Aircraft Corporation for the US Navy.  After the war, the Goodyear Tire Company would resume using blimps for advertising purposes, a tradition that it retains to this day.  In fact, most of Goodyear’s post-war advertising blimps were originally acquired from the Navy after the end of the war for pennies on the dollar as part of the surplus property disposal process.