By 1938, flying between the USA and Europe had become commonplace.  What had been the stuff of Lindbergh and Earhart just a decade before was no longer anything special.  The first international airlines were contemplating regularly scheduled commercial flights across “the pond.”  Still, even at that late date, one last great transatlantic flight would yet take place and be celebrated with ticker tape parades for its success.  This is the story of Douglas “Wrong Way” Corrigan, a pilot and airplane mechanic who went down in history, not so much for pioneering a new air route across the Atlantic Ocean as for standing up to bureaucratic red tape, gaming the rules, and getting away with it.

Douglas Corrigan learned to fly in the 1926, soloing in March of that year.  Also, he became a skilled aviation mechanic and was soon hired by the Ryan Aeronautical Company.  That very year, Charles Lindbergh came calling.  He asked the Ryan company for a single engine plane that he could fly solo across the Atlantic.  The design produced by Ryan would become the Ryan NYP, better known as the “Spirit of St. Louis”.  Douglas Corrigan, in his new job, was deeply involved.  In fact, he was responsible for the plane’s extended wingspan, which would prove key to the success of Lindbergh’s flight, as the higher aspect ratio and bigger wing gave the plane great load capacity — enabling it carry enough fuel to make it to Paris.

After Lindbergh reached Paris, Corrigan watched in awe as Lucky Lindy was feted as a hero aviator.  Lindbergh enjoyed a ticker tape parade through the streets of New York and was even awarded the Congressional Medal of Honor for his feat.  Yet Corrigan and the other aircraft designers didn’t receive anywhere near the celebrity or attention as Lindbergh, even if it was their pioneering design that had made it all possible.  From that experience, Douglas Corrigan decided that he too would fly the Atlantic as a pilot like Lindbergh, and go down in history.

His plans were to start right away on building his plane, but the onset of the Great Depression in October 1929 hit Corrigan hard.  He lacked the funds to create a purpose-built transatlantic machine.  As a result, he had to settle for what he could afford — a used Curtiss Robin J-1, which he purchased in 1933 for just $310.  For the next two years, he prepared the plane on his own and in his spare time.  He added a more powerful engine and larger gas tanks.  Then in 1935, he felt he was ready.  He applied for permission from the Bureau of Air Commerce for his dream flight from New York to Ireland.

However, Corrigan was shocked when the Feds denied his application.  They stated that his little plane unsafe for a flight over the ocean.  Perhaps as a consolation, they approved a flight overland instead between New York and California, roughly the same distance but, if the engine died or there was some other problem, Corrigan could always land along the way at one of the many airports that, by that time, crowded the map.

Dismayed and with no interest in flying cross-country, Corrigan instead went back to work to get the plane in compliance with Federal requirements for his flight to Ireland.  It took two years and in 1937, he reapplied.  He had enhanced the aircraft’s capabilities and was confident that it would be approved.  This time, however, the Feds not only turned him down, but grounded the plane for six months as unsafe even for a single passenger over land, despite Corrigan’s improvements since his previous application.

Incensed, Corrigan simply registered his modified Curtiss Robin as an Experimental Category aircraft.  In this way, he was allowed to fly from San Diego to New York and back again to prove his experimental modifications.  He accomplished the flight without issue and, pleased with the result, Corrigan flew from San Diego to New York to test the aircraft’s systems, exactly as he was originally authorized to do.  He flew precisely at an indicated airspeed of 85 mph.  At this speed,  he had determined that he would maximize his range and fuel economy.  This time, the test flight revealed a problem — he discovered a leak in the fuel system.  By the time he arrived at Floyd Bennett Field in Brooklyn, New York, the cockpit was filling with gas fumes. 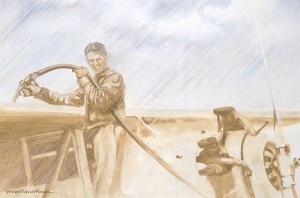 Wrong Way Corrigan fuels his Curtiss Robin, from the artwork of Brian Moose.

Fearing that the Feds would discover the problem and ground his plane a second time, Corrigan kept silent about the gas leak and tried to fly out that same night, even though he hadn’t had any rest.  The local authorities told him to wait until the morning, so he filed a flight plan instead for a departure the following morning.  This was to be his authorized return trip to California.  He filled the tanks with 320 gallons of gasoline and 16 gallons of oil and hoped that the fuel leak wouldn’t cause a significant problem for his upcoming flight.  Then, at 4:17 am, he simply took off into pre-dawn light.  However, instead of heading to California, he turned eastward toward Ireland.

His preparations for the transatlantic flight were abysmal.  On the plane, he had two chocolate bars, some drinking water, and two boxes of fig bars.  Soon after takeoff, he realized that his plane was still leaking fuel.  Ten hours into the flight, approximately while he was passing Newfoundland, his feet were sloshing around in a couple of inches of gasoline on the cockpit floor.  Rather than making an emergency landing, he simply punched a hole in the bottom of the cockpit with a screwdriver.  He was lucky that the fuel drained out without exploding from the engine’s exhaust flash, as the exhaust ports were just in front of the hole he punched.

Aftermath of the Flight

After 28 hours and 13 minutes, Corrigan arrived Baldonnel Aerodrome in County Dublin, Ireland.  On landing, he was met by a bevy of local officials.  Some reports from the time say that he hopped off the plane and asked, “Just got in from New York.  Where am I?”  His attempt at a cavalier attitude seemed to have gone over moderately well with the Irish, who were probably willing to give him a pass on an unauthorized flight because they recognized that Corrigan was himself Irish-American.  Corrigan gratefully accepted a cup of tea and later said that he must have made a navigational error and flown the “wrong way.”  He also claimed that clouds had obscured the ground until he was 26 hours into the flight.  Later, on further questions by the US authorities, he would point out that the Feds were right about the unsafe nature of the plane — the 20 year old compass he even failed to lead him in the right direction!

The journalist H. R. Knickerbocker summed up the unlikely state of the aircraft and flight perfectly when he wrote:

As I looked over it at the Dublin airdrome I really marveled that anyone should have been rash enough even to go in the air with it, much less try to fly the Atlantic. He built it, or rebuilt it, practically as a boy would build a scooter out of a soapbox and a pair of old roller skates. It looked it. The nose of the engine hood was a mass of patches soldered by Corrigan himself into a crazy-quilt design. The door behind which Corrigan crouched for twenty-eight hours was fastened together with a piece of baling wire. The reserve gasoline tanks put together by Corrigan, left him so little room that he had to sit hunched forward with his knees cramped, and not enough window space to see the ground when landing.

Not long after arriving in Ireland, the Feds issued a six hundred word telegram enumerating all of the rules he had broken.  Corrigan and his plane were ordered grounded.  He would have to return to America by ship, his plane boxed up on deck.  However, despite his grounding (which lasted two weeks), Americans celebrated Corrigan’s flight.  He was everyman’s hero, an underdog facing down bureaucratic red tape.

What mattered most to Corrigan was that his dream had come true.  He would enjoy a ticker tape parade larger than Lindbergh’s.  A second parade followed in Chicago.  Offers would pile in from advertisers and sponsors — and he enjoyed his celebrity for many years afterward, profiting handsomely.

Corrigan would go on to enjoy a full career in aviation, even flying ferry operations for the Federal Government during World War II.  Finally, not long before passing away in 1995, he admitted that he had always meant to fly to Ireland.  He never forgave the US Government, however, for standing in the way of his dream.  To the day he died, he refused to allow the Government’s Smithsonian National Air & Space Museum to acquire his little Curtiss Robin for display.  It would be his final act of defiance.

Douglas Corrigan kept his plane stored in his garage for nearly five decades.  Finally, for the golden anniversary of his flight in 1988, he allowed the plane to be taken out to the local airfield where it was displayed at an airshow.  Just for a laugh, the organizers put in a little fuel and oil, and everyone was surprised when the engine started and ran perfectly.  A visibly excited Corrigan then started asking for more fuel so he could take it up for a short demonstration flight.  Who knows what he actually might have had in mind….  When word of his request for fuel reached the authorities, they placed guards at the wingtips to ensure that it couldn’t take off.  They had little authority to do that because the plane was still categorized as “EXPERIMENTAL”, but did so anyway.  They declined to comment but probably felt that he would have likely made a break for it and tried to fly the plane across the country and then, possibly even on to Ireland a second time.  It seems that to the end, he deserved his nickname — Douglas “Wrong Way” Corrigan.


Hello! I please was wondering where Mr. Corrigan’s plane is located currently?
Thank you,
Isobel


A man who had faith in his design, a plan, and the will to do it. If only we could all be so fortunate.


Corrigan was honored by being a character in a Gilligan’s Island episode, who I thought was called “Wrong Way Wainwright”, but this source says Wrong Way Feldman: http://www.tv.com/shows/gilligans-island/wrongway-feldman-10114/


Here’s what I found (not much): “The last thing I read (a couple of years ago), it was stored in a garage owned by his family (he passed away a few years ago). He had it taken out for an airshow and was signing autographs wearing his original leather jacket several years before he died. I think some tech school assembled the plane for him. The FAA got worried he would try and fly it. I was just wondering if it was still in storage. It needs to be on display!”


When I was attending college during the late 1960s, a friend had an article on his wall. It said that after “Wrong Way:Corrigan landed in Ireland, he was asked by a reporter for a statement. The article said that Corrigan hsd daif “If a man can’t have a woman, he ought to have a dog. If he can’t have a dog, he ought to to cheat the government.”

Can anyone tell me if he actually said that?