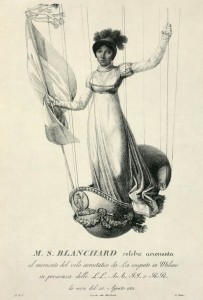 Sophie Blanchard, an engraving celebrating her ascent to celebrate Napoleon’s 42nd birthday, in Milan on August 15, 1811.

Sophie Blanchard was born Marie Madeleine-Sophie Armant in 1778.  A nervous type who was often startled by loud noises, she didn’t seem the type to marry the world’s first professional balloonist, Jean-Pierre Blanchard — nor thereafter to be of a nature that she would herself take up ballooning as well.  Reasoning that people would pay well to see a woman balloonist, and being deeply in debt, Jean-Pierre took Sophie up together for the first time on December 27, 1804, at Marseilles in southern France.  She described the experience as “une sensation incomparable.”  Although she was frightened of riding in horse-drawn carriages, somehow the danger of ballooning didn’t seem to bother her at all, perhaps because riding on the wind in a balloon is a surprisingly silent, peaceful experience.

She continued to make several flights a year and by 1807 was on her 11th ascent with her husband when disaster struck.  The balloon crashed and her husband received a head injury.  From the shock of the crash, she was rendered mute for a time, but eventually recovered.  She didn’t hesitate to return to ballooning — and while other women had preceded her into ballooning, they had all flown either as passengers on free flights or on tethered ballooons.  She was the first women’s solo balloon pilot and, like her husband, she made it a professional career, selling tickets to balloon ascent shows.

The Death of Jean-Pierre Blanchard

Just two years after her first balloon flight, disaster struck yet again.  Her husband, Jean-Pierre, suffered a heart attack while flying with her.  He fell from the basket and fell to the earth, later dying of his injuries.  She had watched as he fell.  Alone and still facing debts from her husband’s earlier balloon career, she continued flying professionally and slowly paid off all of their creditors.  To fly frugally, she elected to use a hydrogen gas balloon.  Being short and light in weight, she used a small balloon and saved money on the amount of gas needed.  To add excitement to her shows, she took to launching rockets and dropping parachutes with small pyrotechnics on board.  It was a great show, but the proximity of the fires to the hydrogen gas bag was always a concern.

Some evenings, when she needed to escape her fears and stress, she would launch herself aloft and fly until dawn, enjoying the night air.  Nonetheless, not all of her ballooning was pleasant as she aimed to press the limits of her skills.  She nearly froze at altitude, other times passed out, and once nearly drowned after crashing into a swamp.  Still, her fame carried her into the limelight, making the travails of ballooning all the more worthwhile.  She was selected by Napoleon Bonaparte as the “Aeronaut of the Official Festivals.” Later, upon the restoration of the French monarchy in 1814, she was made “Official Aeronaut of the Restoration” by King Louis XVIII.  With each passing year, her fame grew and so too her revenues from ballooning shows.

At age 41, a final disaster struck during a late evening show at Tivoli Gardens in Paris.  Unusually nervous prior to the show, she appeared almost as if forewarned of impending disaster.  Her plan for the show was to use more pyrotechnics than ever before, including a slow-burning pyrotechnic called “Bengal Fire” that was designed to illuminate the balloon against the night skies.  Yet something held her back from launching.  Many in the crowd urged her on while others close by warned that perhaps a less spectacular show would be better.  Finally, after long hesitation, she made up her mind with the words, “Allons, ce sera pour la dernière fois” (“Let’s go, this will be for the last time”).

Sweeping away her fears, she mounted the balloon.  Ever the professional, she dressed for the show, wearing a white dress and matching white hat with an ostrich plume.  She carried a white flag to wave to the crowd.  The pyrotechnics were lit and finally, to the great applause of the paying spectators, launched herself aloft.  From the start, things went wrong.  The winds were stronger than expected and the balloon rapidly moved away from the crowds and out of the Tivoli Gardens area.  Then, either the Bengal Fire or a misfiring rocket somehow ignited the hydrogen within the balloon.  It burned, but the strong balloon canopy did not immediately collapse in flames.  She was able to slow her fall by cutting loose her ballast.  She continued the descent as wind blew her into the buildings along the streets of Paris.  Finally, she struck the “slanting roof of a house in the Rue de Provence,” as one contemporary report described it.  This caused her basket to tip and she was thrown out.  Tangled in the balloon netting, she fell onto the rooftop, but then suddenly she fell free and plunged to earth.  She was killed on impact — it was, she had correctly warned, “la dernière fois.” 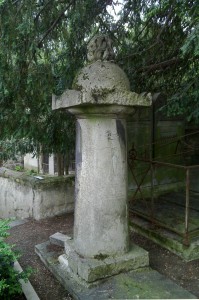 She was buried in the famous Père Lachaise Cemetery in Paris.  Her tombstone is a pedestal that lifts a sphere topped with fire that represents her balloon aflame.  The side is engraved with the epitaph “Victime de son Art et de son Intrépidité.”  In her life, she had made 67 ascents.  Her fame was such that after her death, Jules Verne would write mention of her in his book, Five Weeks in a Balloon.

At the beginning of the 20th Century, the Brazilian Alberto Santos=Dumont (he spelled it with an equal sign to recognize the equality of his mother and father), would perfect his powered dirigible to the point that he used it for everyday needs, weather-permitting of course.  One of his favorite outings was to take his balloon through the streets of his home city of Paris for a trip to a café.  He would land, tie off the dirigible and have coffee and lunch, marking his daily outing as quite a spectacle.  He was a very popular figure, not just in aviation, but also in fashion, wearing much imitated high-necked shirts and Panama hats.  Later, he would take up the design of heavier-than-air powered aircraft.  Even to this day, no other balloonist or dirigible pilot in history — and perhaps even fixed wing pilot — has ever attained that level of day-to-day utility from their aircraft.  Of course, today’s air traffic control and transportation safety personnel would probably disallow a modern Santos=Dumont from taking out his dirigible for a quick run to Starbucks — I suppose that’s called “progress” in today’s lexicon of aviation euphemisms.